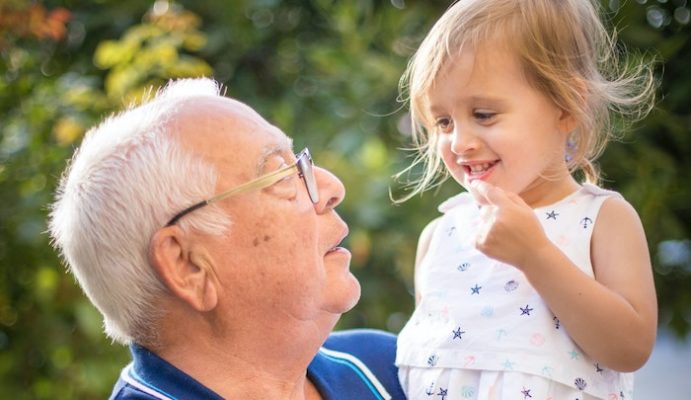 A few days ago I was at my boring job where we were coming off of a rush period. An elderly couple walked in with a little boy, probably 3 years old. He wore his winter coat, his heavy winter boots dragged on the floor and his bangs in a mini top knot. He looked adorable. He walked up to the counter and looked up at me with wide eyes. He told me proudly as his grandpa was placing his order, “I’m having a sleepover with my grandpa!”

At this point in the night I was working my 11th straight hour out of 13 and had dealt with some rude people. I was exhausted, irritated and overall drained. But this one child completely changed my mood around.

I told him that I was very jealous of him and wished I could have a sleepover with my grandpa too. I then told him stories about what we used to do when we had those nights together and he looked at me with all the attention in the world while he waited for his special treat.

He turned to me in the most innocent way and said, “You should leave work and go have a sleepover with him!” After seeing how excited he was by his solution, I didn’t have the heart to tell him that no matter how hard I tried, I couldn’t. It crushed me hearing him say that even though I knew his intentions were pure.

Both of my grandpas passed away. One when I was 17 and the other when I was only 11. So having a sleepover isn’t possible.

Losing a grandparent, especially one you are close with, is very difficult at any age. When I lost my mom’s dad in 2006 I was crushed. I found out he had cancer two weeks before he died (although he had cancer for a few years prior). I felt like my time got robbed.

If I had known he had been that sick I would have made that much more of an effort to spend even more time with him and bring more joy to his life in times when he needed it. I was a bratty pre-teen who started focusing on other things in life rather than family and I wish now I didn’t.

I know how much we meant to him. He loved camping with us, spinning us around the room, going to parades and just spending time together. When he was in the hospital after a risky transplant or getting chemo and felt like giving up, he had a shirt with the hand prints of every grandchild’s hand print on it. Those tiny hand prints were reminders for him to keep fighting, because we needed more time with him first before he became an angel.

I remember going to sleep and seeing him staring at me and my sister and shaking his head with a smile on his face. It was the look of pride and love. He was as thankful to have us in his life as we were to have him.

And seeing the look of happiness and pride on that little boy’s face who was looking forward to his night with his grandpa brought back a lot of emotions. Of course I had to give him a few toys to play with so he could hopefully make some memories with him. Because getting take out as a young kid isn’t memorable enough.

It was adorable and it made me remember a lot of good things about my own experiences and memories. But it also made me incredibly sad to never be able to have these opportunities again. For the first time in a very long time, seeing them and how they interacted made me jealous and put life into perspective for me.

Always do whatever you can with the ones you love because one day you’ll see someone else doing the same thing and you’ll miss doing it more than ever.

Why Prepping For Tomorrow Can Help Change Your Life