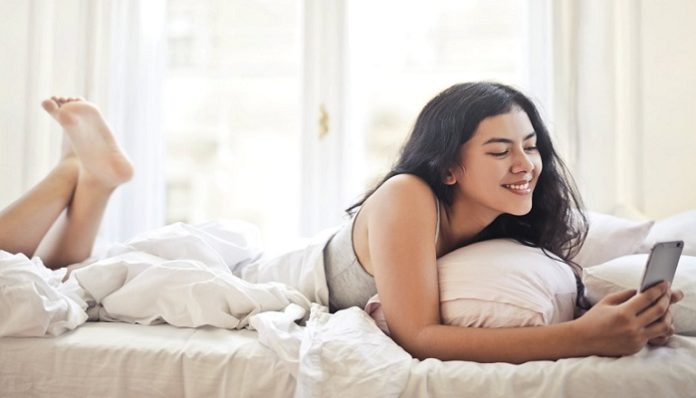 After I was informed that the guy I was seeing was seeing someone else, I found myself in a rut. I had my preconceived ideas on what Tinder was all about, sleazy guys sliding in with cheesy pickup lines trying to get with anyone desperate enough to fall for them. I downloaded the app out of boredom and was just looking for a good laugh, not expecting it to be the confidence boost I needed.

Honestly, my self-esteem took a hit after hearing that the guy I was with had found someone else so quickly, Tinder changed that. Within the first 12 hours, I had 42 matches. Trust me, I wasn’t just swiping right for every guy within a 5km radius; I did have my standards. I was surprised when it would come up that I was matching with so many people so quickly into getting the app. Knowing that many guys thought I was attractive enough to like, some even super-liking, was a good reminder that it was my ex’s loss for ditching me. I know that likes on social media should not be the sole basis for your confidence, but it does help.

I prepared myself for the cheesy pickup lines and sexual innuendos, which did not happen as often as I thought they would. I’ll apologize in advance for any secondhand embarrassment from my awkward attempts at flirting. Here are a few of my encounters:

I had one that was adamant about meeting my first impression of Tinder based on what I heard from friends: 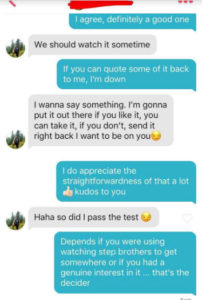 There was also the Meme Master and Gif Giver, which I honestly laughed for a solid 5 minutes about: 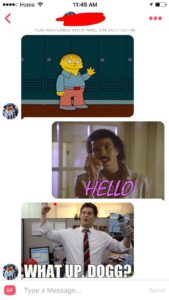 And there was the line throwing guys: 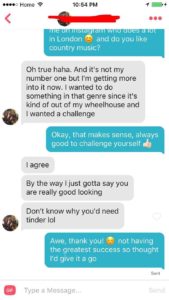 Then there were the guys I didn’t expect to exist on Tinder at all, the ones that actually made plans and whom I’ve talked to further: 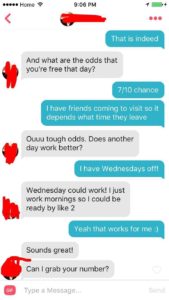 Within the first hour of having Tinder, here’s what my Tinder and normal messages inbox looked like: 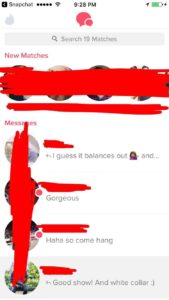 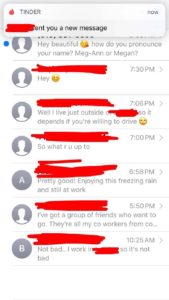 I would like to point out that I wasn’t using Tinder to ignore the hurt I felt. I was using Tinder so as that I wasn’t over thinking myself into a bad mood every day. I dealt with my emotions but didn’t see the point in continuing to bring myself down when I knew I deserved better. Tinder reminded me that there are more people out there who think I’m attractive and want to get to know me, and I think we can all agree that feeling wanted is great.

I’ve been out to drinks with a few of my matches and actually had fun. I had 23 guys message me, and that definitely boosted my ego. It felt so nice to get back out there and get dressed up to go out with someone new. I have dates lined up for 6 of the 7 days this week and am so excited to do something other than watch Netflix alone in my room while eating popcorn.

Tinder was a great self-esteem booster and gave me a newfound confidence that I didn’t know I had. Some of the lines were quite cheesy, but I can appreciate that people are putting themselves out there and that some people are actually honest about their intentions. It’s refreshing to have my phone constantly blowing up with new guys asking me about my interests and goals in life instead of waiting around for a message I know I won’t be getting.

I have a newfound appreciation for Tinder and the wonders it did for my confidence, it definitely wasn’t what I expected from an app that is based on matching people based on looks alone. In all honesty, I don’t regret getting Tinder at all. It helped me move past something that I didn’t think I would get over as quickly as I did. I am thankful that it reminded me that the world is full of so many people and that there are other guys who will compliment you and can make you smile.