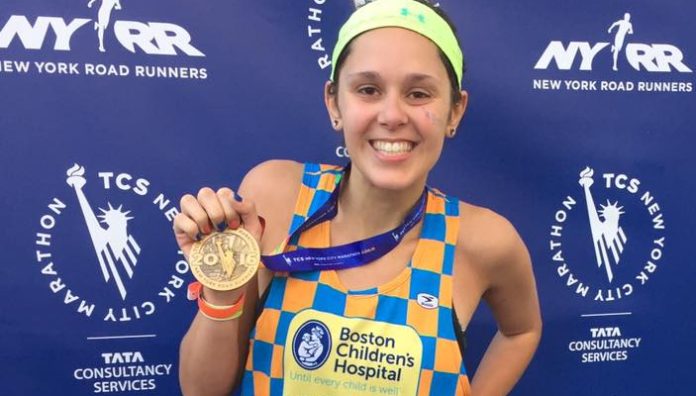 Sports are typically very physical. Don’t get me wrong; running requires muscles and endurance and involves a ton of conditioning. But mental strength plays just as big of a role as any of those things.

One foot in front of the other.

These are some of the phrases I told myself during the years of training I’ve done. That’s right, years. For me, running started in high school but not ever as a part of a track or cross-country team. As a teenage girl, looking good for prom was all that mattered. With the no-breakfast-and-water-for-lunch diet I adopted my senior year, I knew running would help keep me slim too. Taking to the back roads by my house only on nice days, I would stop for walking breaks all the time. After prom, I kept it up and worked up to running maybe 3 miles without stopping by the fall of my freshman year in college.

In college, I drank a lot and would do anything to avoid the freshman 15. With the help of an indoor track at the school gym, I could do laps a few days a week. This helped keep the vodka that I drank straight out of the bottle while I sat alone crying over a boy, or the gross beer handed to me at frat houses Thursday through Saturday, or the buffet that was the dining hall off my body.

After college, running became my lifestyle. It was my first spring living on my own in Boston, as all the ads for the BAA Boston Marathon went up, that inspired me. It was that same spring that two brothers tried to ruin this beautiful day by planting IEDs along the finish line. After this, running for all those who couldn’t finish became my mantra. My first race was in June that year, 2013; a 5k for a family who was injured and couldn’t pay their medical bills. Second was the next year, right before the first anniversary of the bombing, to benefit a local Boston Police Department that had worked overtime for 3 days trying to find the kid responsible.

You can do this.

When I looked into running a full marathon, I realized it is not as simple as signing up and paying a steep fee. There are hoops to jump through and you have to jump fast. But I had heard of charity options and I figured this was my ticket. I filled the form out 3 times over the past couple of years. I only clicked submit once. As I said, running is mental and I didn’t think I had it in me.

But Boston Children’s Hospital took me under their wing, for the second time in my life, when they accepted my application to run for them. Yes, the second time. My little brother wasn’t born with a clean bill of health. My first memories are of lights and a river and tall buildings; years later I learned this was Boston and that my brother almost never made it to the age he could annoy me at, the age he could start playing hockey at, the age he would discover his love for music at. He was sick and Boston Children’s saved him. Even more than that, they kept my sister and I entertained during his appointments and surgeries when our parents were too busy with doctors. They made our family whole and will make that dream come true for so many more families with the help of programs like the Miles For Miracles one.

If it were easy, everyone would do it.

I heard these phrases, along with many others, yelled at me from the sidelines of the 2016 TCS NYC Marathon on Sunday. These thoughts were no longer only in my head. The likes of strangers from all the five boroughs and across the world, friends and family from around the states, other runners on the course that can sense someone struggling were encouraging one another.

And 99% of the people who helped me get me across that finish line, were those strangers. Cheering me, and more than 50,000 other runners on, were people from all over. Ethnicity, religion, sex, social class, job, body type, literally anyway you could classify a person, they were there. And they were cheering for everyone. Things like this make all the hate melt away. You can be a Clinton or a Trump supporter; you can be a transgender or a devout catholic; you can be a 5-year-old or an 85-year-old.

People are there for you. Nothing is more beautiful than that.

All of these people, my boyfriend, my parents, my best friends, my acquaintances, the complete strangers that I will never be able to personally thank, helped me to where I am today. They helped that shallow girl, who is still inside me yelling that appearances are everything. They helped that sad girl, who fears she isn’t good enough for the honest kind of love. They helped that girl who just wants to do something in solidarity to show that no bombs or illnesses can take away a person’s spirit, that there is still good in the world.

There are so many accomplishments in the course of one’s life. Your first word, a college degree, a promotion, a baby, etc. They are amazing! Yet still commonplace, in a way, and expected. A marathon is something few people do, and for me, this was not what I would have expected of myself. I don’t think anything will compare to the first time crossing that finish line. You work your body and mind for so long for this. Everyone has a story and a road that got them here and when you see that mile 26 sign, it all comes together. It brought tears to my eyes even to envision it during the days before, and when it was finally accomplished, an X on the training calendar that had been on my wall, the tears would not stop coming out as a smile so wide crossed my cheeks.

Why You Should Never Stop Looking For The Good In People