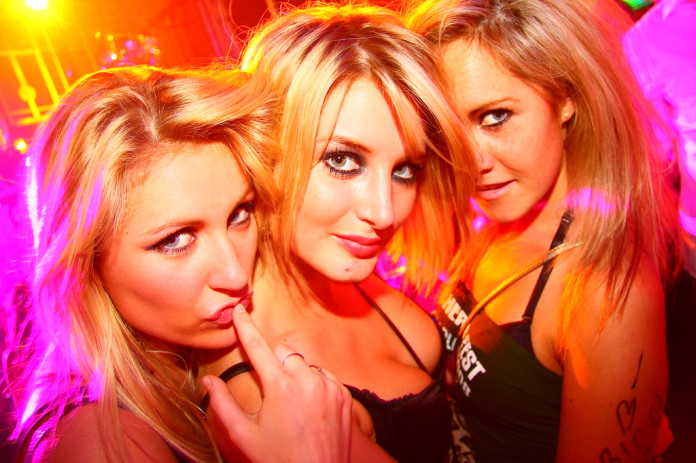 It’s Sunday night, you’re just now getting over your hangover and wasting time on Facebook scrolling through your News Feed looking at all the pictures from the weekend. You see a picture with 127 likes and an assortment of comments from various girls saying things like: ‘gorg!’ and ‘hello boobies!’ and guys saying things like, ‘damn’ and ‘holy shit ur hot’ …and whatever other charming things they can come up with.

Allow me to illustrate:

She’s got her hand on her hip, cleverly placed in the section that will make her waist look Barbie-thin. She’s accompanied by her two ‘bests’ on each side (the same two girls whom she’ll talk shit about the second one of them walks away to apply more glitter infused bronzer.) At least one of these girls is making a duck face while the other is complaining that her arm looks fat in one of the photos.

Big teased hair, curled at the end, too much hairspray. Hair is either way too dark or way too blonde. She’s got enough foundation on to make a ‘before’ Proactive picture look like an ‘after’. She’s got eyeliner that demonstrates the ‘trying and failing at the Lauren Conrad cat-eye” look and let’s not forget, my personal favorite feature: the pursed lips that scream, ‘give me the attention that my father clearly doesn’t.”

Now, moving down to her aggressively smooshed together cleavage that has GOT to be cutting off her circulation followed by a short cut dress from Forever 21 in efforts to show off her Jergens self-tanner saturated legs, all standing on the foundation of an 18 dollar pair of neon pumps from Charlotte Russe.

Let’s not hate too much on this girl because to her defense, she’s getting exactly what she’s asking for-attention. Hundreds of likes will go a long way for this girls self-esteem. It’s not her that I have a problem with, it’s the error of THAT, being recognized as ‘hot’.

In the mind of guys, it’s hot because men are visual creatures.

I would love to sit down with those hundreds of people who were attracted to this picture and deemed it as a tolerable way to exploit attention and deliver them some facts.

Also, that is literally the very best she can look. Most girls when trying to look their best (I do it too) use so many enhancements. I mean, the makeup is really just the beginning. There’s hair extensions, fake eyelashes, cutlets to push up your boobs, the list goes on and on. Strip away all of that fakeness and the 5 different Instagram filters and you’ll probably get a completely different looking person. (Kind of like how Kim Kardashian used to look, you know, like…before she had money.)

What’s even more ironic is that the girl who is posting these photos is the same girl who is tweeting about how much respect she ‘DESERVES’ from a guy and how she wants a true gentleman and complains about being single over the holidays…and to this girl, I say, try a cardigan next time.

Once again, making the world a better place: