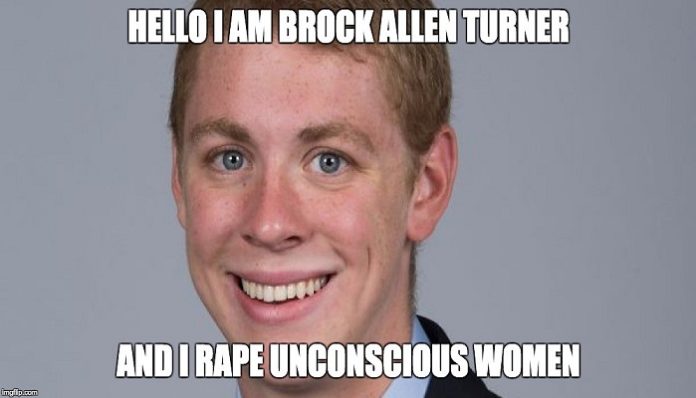 This is a letter addressed to the people who plead the case of their “beautiful, trustworthy and kind” son. The people who have maintained that alcohol, college, and older friends turned their son into a rapist. The mother who said her son didn’t deserve to go to prison and that his status as a sex offender was “harsh enough.” The father who said that “20 minutes of action” didn’t warrant the verdict his son had received. The father who also lamented about his poor son’s unhappiness since the moment he got caught raping a woman in the street. The father who said his son was sorry for what he had done, and he knows that his son is sorry because he doesn’t enjoy rib-eyes anymore.

Poor Brock Turner, he’s sad that people hate him. Poor Brock, he isn’t his “happy go-lucky” self anymore. Forgive me for not finding any sympathy for him.

I save my sympathy for rape victims.

My question to Brock Turner’s parents is this: What if that unconscious woman on the street was your daughter? I know you have one. What if that had been her? What if she had been raped? What if she had woken up in a hospital, with pine needles sticking out of her scalp? What if she had been forced to stand in front of nurses and doctors… naked, raw, confused… as they took photos of her body and stuck things in her vagina? How would you feel, knowing that your daughter was violated, that you weren’t there to protect her, that she’ll never know true justice? If you care about your daughter half as much as you care about your rapist son, I imagine you would be destroyed.

To the parents of Brock Turner, I say this: I went to Ohio University, a school known for its party atmosphere. I drank alcohol on a regular basis, often becoming drunk. So did my friends, both male and female. I was socially active, had older friends, was involved in extracurriculars, and even drank underage. Just. Like. Brock.

Being drunk does not justify rape.

I am of no relation to the woman raped by Brock Turner, but I’ve thought about her almost every day for months. I am overwhelmed with anger and sadness for her.

You say that your son’s life will never be the same. That’s true, but he deserves that. She doesn’t. She didn’t consent to what happened that night. She couldn’t. It wasn’t her fault, nor was it something that can be blamed on alcohol. Your son chose to rape that woman. He chose to put himself inside of her as she laid on the ground, virtually lifeless. You can’t argue against that; it’s the truth. It’s a cold hard fact that he raped her. The men who interrupted your son’s “20 minutes of action” described a terrifying scene. One cried as he recounted the scene that he stumbled upon. A woman, not moving, on the ground. A man, “aggressively thrusting his hips into her” and then running away when confronted.

I understand that there must be some sort of unconditional love between a parent and a child. What I don’t understand is your blatant disregard for the woman he attacked. Your points of justification that were so trivial I thought you had to be joking.

I would like to believe that my parents are good enough people that they would disown me if I ever raped someone. They have instilled in me the difference between right and wrong and they don’t make excuses for anything I do that isn’t in line with what I’ve been taught. I can’t justify your unwavering support because I would expect my parents to be disappointed in me beyond repair. I wouldn’t expect them to defend me. I wouldn’t expect them to justify what I had done by blaming my teammates and alcohol.

I would expect them to hold me accountable and I love them even more for that.

Originally published on Confessions of a TwentySomething Female