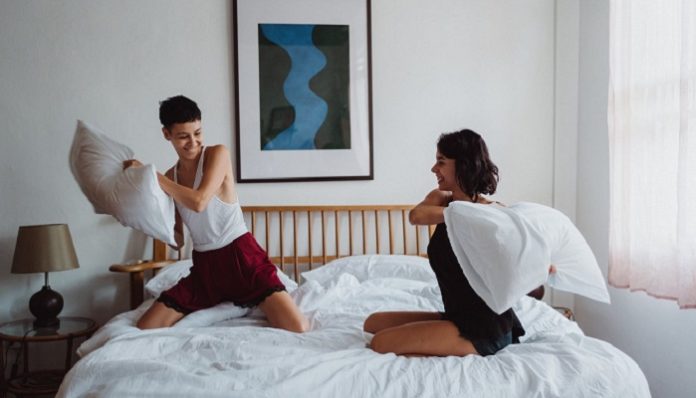 In a relationship, disagreements and arguments are natural occurrences. They prove you care, that you both have individual opinions, and that you’re close enough to be honest with one another. But when those situations do arise, it is important to fight with your partner in a healthy, respectful way.

1. Never go to sleep angry
This is a classic piece of advice, but oh so true. There’s no such thing as going to sleep angry because after a bad fight with your SO, you’ll end up tossing and turning, over thinking every little thing that was said. No matter how stubborn or angry you might be, make a point to bring an end to a fight when you both go to bed. There’s nothing worse than waking up and realizing there’s a lingering problem you have to deal with.

2. Don’t be accusatory
Simply starting a sentence in the argument with the word, “You…” will cause the other person to immediately become defensive. Even if they may be to blame, no one ever likes to feel attacked or accused. If there is something that you need to address, you can avoid an entire argument by starting the sentence with, “I feel…” Just by changing the line, “You never help out around here,” to “I would really love some help.” Or changing “You hurt my feelings” to “I’m feeling hurt by this” will help to avoid a bad reaction.

3. Don’t get caught up in the fight
It’s easy to get swept away by your anger. Our heart beats faster, our face starts to burn, and we become louder. But it’s important to not let that passion take control. You don’t want to be so worked up that you sling out insults and cause irreversible damage. You don’t want to bring up the past to purposely hurt the other person. It’s important to remember that you do really love them and you’re just not seeing eye-to-eye at that particular moment.

4. No name calling
In the heat of the moment, we might say awful things, which include some pretty awful names. I knew I wasn’t in a healthy relationship because we fought like savages and would say atrocious stuff to each other. Even when the dust settled and we made up, I would still have a thorn in my side that I was called “dumb b*tch” and “f*cking c*nt” repeatedly.

5. Take a breath
If you feel like you’re getting a little too heated, take a while to calm down. Sometimes when we get so caught up, our unbridled anger and cruelty feels justified. But if it’s getting to that point, it’s important to take a step back, distance yourself from your partner, and breathe. A lot of the time after the furious buzzing in our brain quiets down, we realize that we might have overreacted, or that it’s really not worth all the fuss. It’s important to catch yourself before you make things worse.

6. Pick your battles
Not everything warrants an argument. You should know when something is worth addressing or just leaving alone. If you’re feeling especially irritable after a hard day at work, and one of their harmless habits is bothering you, don’t pick up on it. Chances are the next day, you’ll no longer care, or it’ll no longer affect you. Most importantly, learn to let things go if you have forgiven your S.O. for something in the past don’t bring up old wounds to just trigger another fight.

7. Make an effort to see things from their point of view
Even if you think they are being completely unreasonable, try to take a step back and put yourself in their shoes rather than immediately getting defensive. You will have a much healthier and respectful argument if you tell them that you understand where they are coming from.

8. Explain yourself
You can very easily cause the person you’re arguing with to feel frustration if you give no actual explanation as to why you are feeling a certain way. Never assume your S.O. is a mind reader, you will only end up disappointed. And there is no use in being passive-aggressive, you’ll never get anywhere. Lay out why you are feeling frustrated, upset, or angry (without being accusatory) so you can resolve it sooner than later.

9. Kiss and makeup
No matter how intense it got, no matter how many dishes were broken or curses were thrown about, always kiss and makeup. And even if you don’t want to, apologize. We can get so damn stubborn that even at the end of an argument, we won’t want to admit that we’re wrong or say we’re sorry. It’s important to swallow your pride and say it, as sincerely as possible. It will relieve the tension and let your partner know how much they mean to you. Even if they started the fight, it’s still important to apologize for your reaction if it was over the top. Arguments can truly bring you both closer together if you end it on a respectful and loving note.

Fighting will always be a part of any relationship, but it’s important to not let it be a destructive part. A healthy and fair fight will make you feel closer together afterwards, and you’ll be spared feeling heaps of regret if you keep these 9 things in mind next time an argument comes up.

Transgenderism: Why Nothing Pisses Me Off More