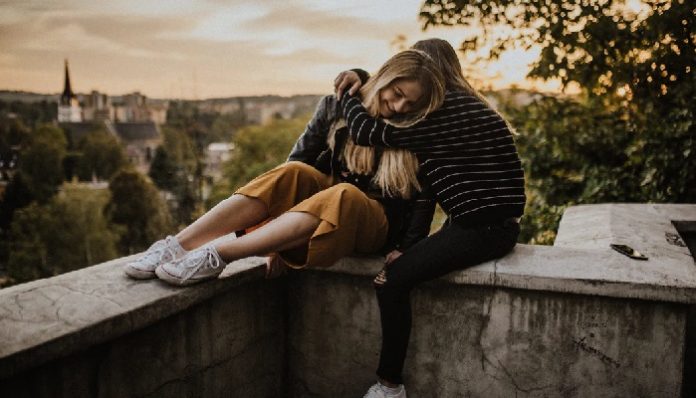 You’re kind of dating, well, almost. You’re not really sure, but you spend a ton of time together. You kiss, and cuddle, and even have the occasional sleepover, but you wouldn’t really say it’s official. You’re just trying to take things slow, and you’re not ready for the labels; but what the heck do you do now that the holidays are approaching?

This means time apart, family reunions, gift giving, cuffing season, and oh no, what are you going to do for New Years Eve? You wouldn’t hook up with anyone else, and you’re exclusive enough to make him the sole contender for your midnight kiss, but your hometowns aren’t close enough for a last-minute “so what are your plans tonight?” text. The dilemma of a lifetime.

Don’t stress, you’re not alone slamming your head against your phone trying to figure out what to call this undeclared romance. I’d say you should take a step back, take a deep breath and text the damn boy back because the holiday season struggles are all going to be fine with the help of these 5 tips:

To gift, or not to gift; that is the question. I’m sure you’ve both giggled over your wish lists, and you both know at least a few things that you could get each other. But is it too soon? I mean, do you really want to spend money on someone who you don’t even know that you’ll be talking to come January? My advice is to go the humor route. Last Christmas, I found myself in my very own “almost relationship.” After a few sleepovers at his place, I noticed how dimly lit his bedroom was, and how we both joked around that he needed some twinkly fairy lights to brighten the place up. I hit up the dollar store on our last day of exams and gave him a cute little set of christmas lights before heading home for the holidays; it was thoughtful, but subtle. Subtle, that’s the key.

2. The big question: “Do you have a boyfriend?”

Your relatives are all together, maybe even for the first time all year. That means you’re bound to be pinched at the cheeks and asked the oh-too-familiar question “omg do you have a boyfriend? You’re so beautiful!!” to which you’ll think with despair, “uhhh, kinda sorta but not actually officially really…yet.” Your man is never going to find out whether you said yes or no to this annoying but typical question, so just go with your gut. If you feel comfortable enough, say you have a crush on someone and rant to your cute aunt all about it. If not, don’t flinch saying no. Being an independent hottie who is getting her education and spending her time doing things she loves is never a bad thing.

Talk about this before you head home for the holidays. If you have mutual friends, even better! Discuss your plans and see if there’s any opportunities to meet up. If you’re mutually exclusive, this shouldn’t be hard to decide that you both want to kiss each other at midnight. Offer to do something fun at a city in between both your home towns. New Year’s is right smack in the middle of your vacation so it’s easy to swing the “I can’t go that long without seeing my roommates” argument and get everyone together in the name of champagne and overpriced hotel rooms.

4. Staying in touch with time apart

You might think that staying in touch will be hard when you’re no longer running into each other at the library or on your way to English class, but it won’t be that bad. It’ll be a true test of how you two communicate, and if a relationship is something you should really be pursuing after all. Keep in mind the holidays are a busy time for everyone, and if he’s taking time out of his day to text you, he must really like you. Don’t get caught up on phone calls every night over the break, you’re not dating after all. But feel free to offer a last-minute Skype session on Boxing Day to show each other what you got under the tree, or just to show off the quality of the new phone you just got.

5. The fear of seeing old relationships from your past

You both likely carry the fear that when you go home for the holidays, the girl/guy you’re crushing on, talking to, and not quite official with yet, will run into exes from their past at holiday parties, or friend reunions. The chance that they’ll rekindle their old relationships in the short two-week period that their home is not only slim, but also highly unlikely. There’s a reason you’re in their life now, and that person isn’t. You need to start your almost-relationship off on the right foot; with trust. So play the nice-card and tell them you think it’s awesome that they managed to get in touch with old friends over the holidays.

The holidays are the most wonderful time of the year in more cases; but when you find yourself in a poorly timed “almost relationship,” it can be scary knowing what the socially acceptable way to go about things is. Enjoy your time off, relax and pull through. You will both have plenty of awkward hugs, blush-filled texts, and sweaty palms in the new year. Not to mention Valentine’s day will be just around the corner; what a beautiful time to start a relationship.