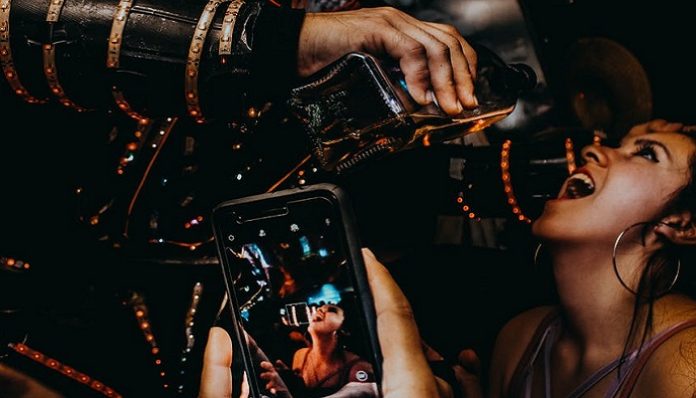 I’ve always heard, and mostly believed, that you could never find love when you’re under the influence. You’re not in your right mind, your perception is impaired, blah blah blah. All those things may be true, but why does that stop you from potentially meeting a future lover? I’m here to tell you that you CAN find love when you’re intoxicated, contrary to popular belief. I don’t drink very often, but one night I found an equally drunk boy who became my entire world in a matter of 24 hours. Here’s my story, and it could easily happen to you, too.

It was the 4th of July. I took a trip to the boardwalk, slightly tipsy and ready to watch colorful explosions light up the sky. After meeting up with a friend and her new boyfriend, she has told us that their friends were coming to say hi. I had plans to leave the boardwalk after the fireworks and head to the next festivity for the night, but fate had other plans for me…

Next thing I know, I see a crowd of obviously inebriated guys striding towards us. Immediately, I realized I wasn’t drunk enough to handle this situation, and planned to move on for the night. But then, I looked through the crowd of obnoxious boys and saw this adorable, but also drunk boy, quietly sitting on the sidelines. A part of me contemplated staying a tiiiiiny bit longer to catch his name. We entered the group to say hello, and this quiet drunk boy proceeded to show us a website where you “could buy hookers if you were into that kind of thing.” And then I was ready to leave…again.

But then he smiled, and I decided I couldn’t go. And the little bit of drunk I had left gave me the courage to walk around with him and ask his name. On that boardwalk 2 hours away from my current house, I come to find out that he lived 5 minutes away from me. “What are the odds?” I thought to myself. I cancelled my plans for the rest of the night, and continued to drink with these new faces. My flip-cup partner became the love of my life. The boy I drunkenly walked along the beach with became my entire world. He handed me a flower he had found, and I never threw it away. He put his number in my phone, mispronounced my name, slurred half his words, stumbled with every few steps, and STILL texted me the next morning to tell me he wanted to see me when we returned home after the holiday.

We did hang out. Immediately. And sober. He fell asleep at my house, accidentally slept over, and from that day forward, we were inseparable. And no, we actually don’t drink very often. I learned that he’s incredibly intelligent, scarily similar to me, refreshingly different, funny, sweet, and held the same morals and values as I do. He has a beautiful personality, he’s respectful, and his outlook on life makes me want to be a better person. Never has anyone cared about me the way he does, and I never imagined that the drunk boy on the boardwalk would be the absolute love of my life.

If you’re reading this, know that if it weren’t for that drunken excursion, I wouldn’t be where I am today. I found the best thing in my life while I was drunk, and who knows…it could happen to you, too. Meet a cute boy at the bar or at a party? Just talk to him. Don’t assume that because you’re both drunk, that it’s simply not meant to be. It may be the most beautiful thing you’ll ever encounter. Give it a shot. My boyfriend admits that if it weren’t for the alcohol, he wouldn’t have had the courage to talk to me. Sometimes, being a little drunk gives you that tiny bit of confidence to approach someone you wouldn’t have talked to otherwise. Drink responsibly, love passionately, and you’ll thank me when you find yourself staring into the eyes of the boy you love, who you may or may not have met drunk on one of your nights out. You’re welcome.

A Piece Of Advice To Those Scared To Love After A...

6 Simple DIY Projects That Will Spice Up Your Home This...