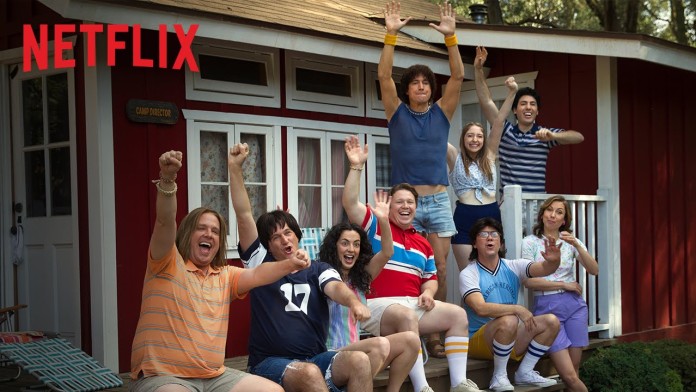 If you haven’t seen it, the movie takes place on the last day of camp at Camp Firewood in 1981 and centres around the antics of the counsellors who are trying to take care of “unfinished business” while still looking out for the campers. The movie received a sad 32% rating on Rotten Tomatoes and didn’t fair much better in any other audience and critic ratings. The jokes are bad, it’s inappropriate, and the concept of counsellors getting crazy at camp is a little played out. To be honest, the entire movie basically makes no sense at all. However, it has become something of a cult-classic over the years, mainly due to it’s now star-studded cast.

Flash forward to 2015, over a decade after the movie’s 2001 release, and we have; Wet Hot American Summer: The First Day of Camp. It’s an eight episode series taking place during, surprise surprise, the first day of camp. Counsellors are at a meeting and planning for the summer ahead.

This is interesting if you’ve seen the original film, because you know there’s a scene where several counsellors make a commitment to return to Camp Firewood and meet up again 10 years later. You’d think it was the perfect set up for a sequel. But they took it in a completely different direction and instead, the series went back further in time to explain some missing pieces we may be wondering about. And it worked out just right for them.

Here’s the top 5 things you’ve been dying to know that the new Wet Hot American Summer: The First Day of Camp series answers:

1. First and foremost, yes the original cast all returned.

Aside from the campers who were obviously too young at the time to reprise their roles now as adults (Aaron (Gideon Jacobs), you are missed!), the original cast all came back. That’s difficult to pull off with any sequel, let alone one where most of the cast have become incredibly successful. In fact, most of them appear in every episode, which is pretty cool.

For the most part, the past 15 years were easily covered up when it came to the cast being able to pull off their 16 (or younger) year old characters when they are almost all over 40. Of course, there were a few exceptions where we all just kind of laugh about it and move on.

3. You will learn more about the background of the characters.

You’ll figure out what the hell is up with the talking can of vegetables and understand why Abby Burnstein (Marisa Ryan) hooks up with guys who look about half her age. Some perspective is offered on Gail’s (Molly Shannon) relationship issues and why Gene (Christopher Meloni) is mildly insane. You get insight into where it all began with Katie (Marguerite Moreau) and Andy (Paul Rudd) as well as Ben (Bradley Cooper) and McKinley (Michael Ian Black). Details are revealed on how Beth ends up in charge, and finally you discover what the deal is between Susie (Amy Poehler) and Ben (Bradley Cooper). There’s even some added twists to keep you on your toes.

4. Yes, a lot of the signature music returns and the rest is equally awesome.

One thing you could at least appreciate from the first movie if you thought it was ridiculous, was the music. The new mini-series has a killer soundtrack, maybe even better than the original!

I mean, why wouldn’t they? There is a show and it’s hilarious. I’ll leave the rest to your imagination.

6. And yes, the opening scene is re-enacted.

The classic opening cabin scene that made you wonder what the heck you were watching was redone with some minor changes, and it’s awesome.

The series is sitting at a great 8.0 (out of 10) star rating on IMDB. My personal opinion is, they did a great job staying true to the original characters while incorporating new aspects to make it relevant totoday. Jason Schwartzman (Saving Mr. Banks), Kristen Wiig (Bridesmaids), Jordan Peele (Key and Peele), Michael Cera (Juno), Randall Park (The Interview), Jon Hamm (Mad Men), Chris Pine (Star Trek), and ‘Weird Al’ Yankovic joined the cast, making a well-rounded group of our favorite comedians. They even added a rival story, because let’s be honest, who doesn’t love a good camp fight?!

Overall, if you like the first movie, it’s worth watching. If you don’t, they’ve stayed true to their off-beat humor and you should probably steer clear. For anyone out there yet to experience Wet Hot American Summer, welcome to camp.

The 7 Stages Of Personal Success