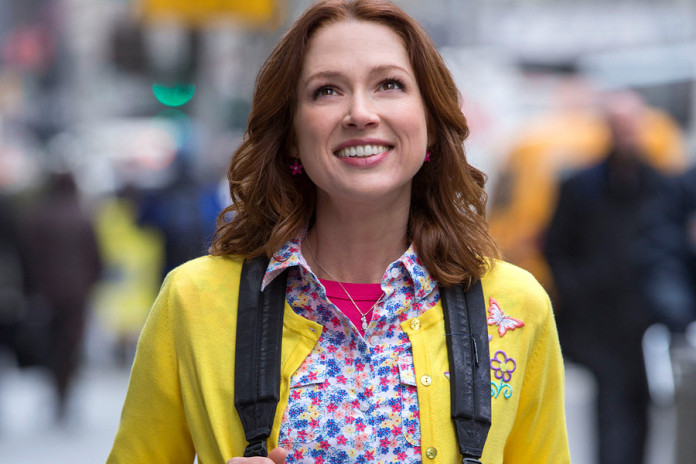 Many of us have seen Tina Fey‘s amazing Netflix Original series, Unbreakable Kimmy Schmidt. And if you haven’t, you should. The show is about Kimmy Schmidt (played by The Office & Bridesmaids’ Ellie Kemper), a woman who was kidnapped by a cult when she was 15. The leader of this cult, Richard Wayne Gary Wayne (portrayed by Bridesmaids’ Jon Hamm), has convinced her and 3 other women that the world has ended, and they need to remain in an underground bunker to stay safe. The show begins with their rescue and follows Kimmy as she begins her new life in New York City–with no real world experience. She tackles everything from working for her crazy boss Mrs. Voorhees (30 Rock’s Jane Krakowski) to living with a roommate and eccentric landlady (Tituss Burgess & Carol Kane). She also reconnects with and forgive people from her past, including her step father (Tim Blake Nelson). Despite the seemingly heavy subject matter, Tina Fey has put a unique spin on the idea and has come up with one of the funniest shows on Netflix.

So far we only have one season of this amazing show to repeatedly binge watch, but we’ve seen countless examples of Kimmy demonstrating just how and why she is so unbreakable. Along the way, she’s growing and teaching those around her how to stay positive and love life. If there’s one thing particularly interesting about the show it’s that, despite everything she’s been through, Kimmy has one of the best perspectives on life and the world around her.

Here are 9 times Kimmy gave us the best advice ever.

1. “We’re not garbage. We’re human beings. I have to get my life back. Everyone will look at me like I’m a victim and that’s not what I am.”

We should never let anyone else dictate our worth to us. We should be bold, take risks, and strive to be the people we want to be no matter what or who stands in our way.

2. “Life beats you up. You can either curl up in a ball and die or you can stand up and say we’re different. We’re the strong ones and you cannot break us.”

We may not all be kidnapped by a cult and forced to live underground for 15 years, but no matter who you are, life will throw challenges your way. Your struggles do not define you, but how you face them does. Be strong and show life who’s boss.

3. “I learned a long time ago that a person can stand just about anything for 10 seconds, then you just start on a new 10 seconds. All you’ve got to do is take it 10 seconds at a time.”

Although this is supposed to be comedic, it’s pretty true. You can stand just about anything for only 10 seconds and sometimes, things get unbearable. When those times come, it’s important to keep in mind that it’s only temporary and you will survive.

4. “When I used to get really sad in the place I used to live, I would smile and jump up and down and say ‘I’m not really here'”

Another joke that could actually be quite helpful in desperate moments. I’m sure we’ve all been in more than one situation where we wished we could be anywhere but there. Although I wouldn’t recommend literally jumping up and down and saying this, though it’s not a bad idea to do so when possible and appropriate, take yourself away in your mind.

Now this was really just meant to be a snappy comeback but for some people, it’s a little condemning. Xanthippe (the step-daughter of Kimmy’s boss) is just an exaggerated version of the way the average young person thinks and behaves these days.

6. “I thought the world had ended. I thought I would die there. But I survived, because that’s what women do. We eat a bag of dirt, pass it in the kiddy pool and move on.”

Comedy laced with real talk. Sometimes, things feel pretty hopeless but as not only women, but people, we somehow find the strength to keep going and heal.

7. “Why do we keep doing this to ourselves? Replacing one stupid male authority figure with another? Like ‘Days of Our Lives’ replaces Roman Bradys.”

Any ladies out there guilty of this one? Maybe rebounding far too often after relationships or allowing a man to tell you what to do? Although women are making amazing strides towards equality and empowerment, we still often associate leadership and authority with men and we need to stop. After all, females are strong as hell.

8. “Smile until you feel better, I call it Kimmying.”

It’s amazing what a smile can do, not just for your mood but for those around you. If you want to do one small thing to have a positive impact on those around you, smile.

9. “Be you. Be what you want. And then become unbreakable.”

This one is possibly the best. It is imperative that you figure out who you are, what you believe, what you want, and what you value. Everyone deserves to be the person they want and the person they were meant to be. The world is simply a better place when we all be the best version of ourselves we possibly can.

Yup. When all else fails, you’ve done your best, and the day still kicked your butt. Alcohol tastes pretty good.

Who knew you could learn so much watching quite possibly one of the most hilarious current series? We still have a long wait until Season 2 (due to begin March 2016) but in the meantime, let’s enjoy re-watching and building ourselves to be the best women we can be so that we too can become Unbreakable.

Why As A Control Freak I Chose To Go Skydiving