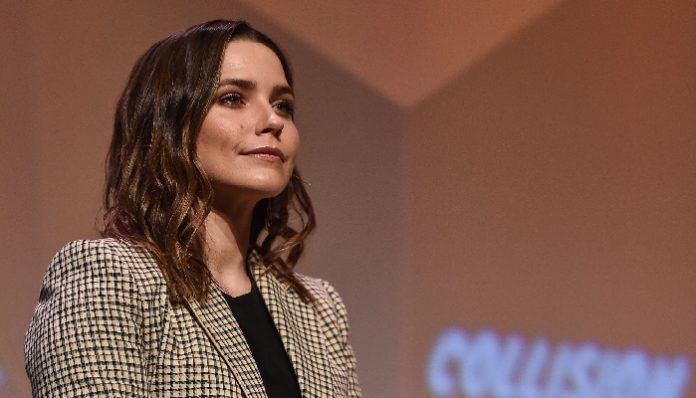 We first fell in love with her on One Tree Hill as the unforgettable Brooke Davis. The more we watched the show (and the more we creeped on her online), we realized Sophia Bush is everything all girl crushes are made of. She’s kind, thoughtful, ambitious, beautiful, and down-to-earth. Thankfully, social media has allowed us to feel like one of Sophia’s close friends, and with each passing day, we fall more in love. Here are 6 times Sophia Bush made us wish OTH was back on the air.

She started her own perfume line.

Partnering up with Randi Shinder and Michael Nyman, Sophia Bush launched a perfume line called i smell great that promises to be radical, honest, and simple. They currently have 4 scents: angel cake, wild honey, candy crush, and beach babe, which are available in a range of products. They’ve even partnered with The Girl Project where they will donate $1 from every product sold to help women across the world receive an education.

She’s all about female empowerment.

Sophia is active in her belief that women should be strong, fearless, and inspiring. She is a big believer that beauty has less to do with what’s on the outside, and everything to do with what’s in a person’s heart. #SmartIsSexy is an active Twitter trend on her account, which she uses to encourage women to pursue learning and follow all of their passions in life. What’s more, she’s devoted to encouraging others to love themselves and take care of their bodies because self-care is an essential part of life. Even her acting roles have always been about girl power, from portraying a young Brooke Davis who started her own clothing line, to her current role as a badass cop on Chicago P.D.

She is a proud supporter of I Am That Girl.

Her best friend, Alexis Jones, who is also an actress, activist, and speaker launched I Am That Girl, a global campaign to help women transfer self-doubt to self-love. She has provided a safe place for girls and women to come together and create a powerful movement. Sophia has become an avid supporter of the I Am That Girl movement as well, and has even written the foreword for Jones’ book by the same name.

She’s in a book club with Emma Watson and Matt McGorry.

Following Emma Watson, Sophia Bush, and Matt McGorry definitely adds a healthy dose of feminism to any person’s timeline. BUT WAIT. It got even better when Emma Watson asked for people to join her book club and the three have honest to goodness started an online book club. This month’s book is called My Life on the Road by Gloria Steinem. If you want to keep up with the discussion you can find the shared book shelf here.

Her social media game is on fleek.

Her Instagram, Facebook, and Twitter profiles are always filled with positivity, love, inspiration, and beauty. No matter what she is doing, she always has a smile on her face. It’s also refreshing to see that she doesn’t try to make her life seem a movie. She’s just a down-to-earth normal human. Scrolling through her profiles always gives us a breath of fresh air in between all of the cyber-hate that we have become accustomed to. Seriously, how perfect is she?!

Sophia is so much more than just an actress. She is a positive role-model for young women around the world. She is the kind of women that all of us aspire to be – kind, smart, ambitious, and compassionate. If all of us were even half as passionate as Sophia, think of how quickly we could transform the world we live in. She used her fame for the greater good by being a businesswoman, a storyteller, an activist, and most importantly, a positive role model. Even though she’ll always have a special place in our hearts as B. Davis, we are so happy that she will continue to be known for so much more!

Why We Should Start Congratulating Each Other More Often