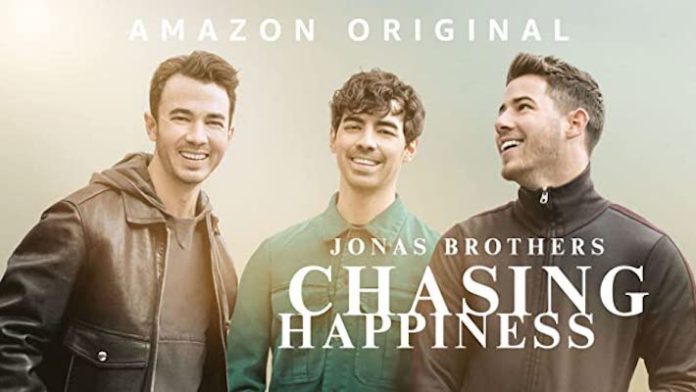 The Jonas Brothers have managed to make fans hearts swoon yet again with their new live concert documentary!

I had the privilege of seeing the Jonas Brothers on their comeback tour, Happiness Begins, at Capital One Arena this past August. The show was sold out, but even though I didn’t have the best seat, I had the time of my life. This morning, Amazon Prime Video released the brand-new Jonas Brothers documentary, Happiness Continues, and as I watched it, I relived the excitement and joy that I felt when I saw the band live. Here are the best parts of the JoBros’ new documentary:

1. Cameos By The “Jonas Sisters”

I loved seeing the bond that Priyanka Chopra Jonas, Sophie Turner, and Danielle Jonas have, not only with their husbands but also with each other. Honestly, I’m amazed by how much the boys love their wives, and I hope to find a love like that someday.

I have loved Jonas Brothers songs, from “Lovebug” to “Burnin’ Up,” since I was a child. Hearing my favorite songs live over and over again let me relive my childhood dreams of being the future Mrs. Jonas.

3. Hearing The Crowd Sing Along

Hearing so many people sing the same song in unison gave me chills when I saw the Jonas Brothers in concert. Watching it all over again in the documentary still gives me chills.

In Happiness Continues, we learn what each of the Jonas Brothers does before their shows. It turns out that Nick listens to Bollywood music to pump himself up, while Joe likes to do pushups, scream, and let others slap him in the face.

5. Seeing Crowds From A Variety Of Cities

Happiness Continues shows us crowds from New York to Vancouver to Miami. Seeing everyone’s posters and merchandise and how excited they were was they danced and sang was a treat.

7. Close-ups Of The Boys During Their Concert Sets

I’m honestly so grateful that the documentary has close-up shots of the Jonas Brothers’ concerts. I was in the nosebleed seats when I went to see the Jonas Brother, but the camera angles in the doc are high-definition.

8. The Tour Documentary Set’s Similarities To The Happiness Begins Tour

Watching Happiness Continues is just like going to a JoBros show. The brothers even wear the same outfits that they wore on the Happiness Begins tour!

9. Seeing Each Of The Brothers As Individuals

The documentary shows shots of Nick playing piano (and guitar in the shower!) We also get to see Kevin eating breakfast with his daughters. It gave you a good behind the scenes look at what their regular days are truly like since it’s still kind of unknown.

10. Singing Along To The Entire Set List At The Top Of Your Lungs

Like any diehard fan, I’ll always sing at the top of my lungs to any Jonas Brothers song. “When You Look Me In The Eyes,” “Gotta Find You,” and “Shelf” are such classics!

11. Seeing How Happy The Boys Are

Fans can tell how different the Jonas Brothers are from the time they broke up. They’re all so happy and have grown a lot!

12. Hearing How Grateful The Jonas Brothers Are

The Jonas Brothers truly appreciate every single one of their fans and the experiences that they give each and every one. They continue to stay humble, no matter how successful they are.

Seeing Joe rock out, listening to Nick serenade us, and watching Kevin jam out on the guitar will take you back. And I’m talking the Camp Rock days-it was that nostalgic and satisfying.

14. Watching The JoBros Play Their Solo Music Together

See Joe and Nick join each other “Cake by the Ocean” and “Jealous” will make your week! (Secretly, it was kind of cool hearing them sing parts of each other’s solo songs too.)

The Jonas Brothers’ tour documentary’s release during the COVID-19 pandemic lifted my spirits, and I hope it does the same for you. Watching Happiness Continues made me feel all of the emotions I felt during the brothers’ live tour all over again. I’ll forever be grateful for how the Jonas Brothers’ music has shaped my entire life from childhood until now. If you’re a JoBros fan, you need to watch Happiness Continues – it will lift your spirits!

Have you watched Happiness Continues yet? Let us know what you thought in the comments!

Stop Measuring The Success Of Your Relationship By The Number Of...