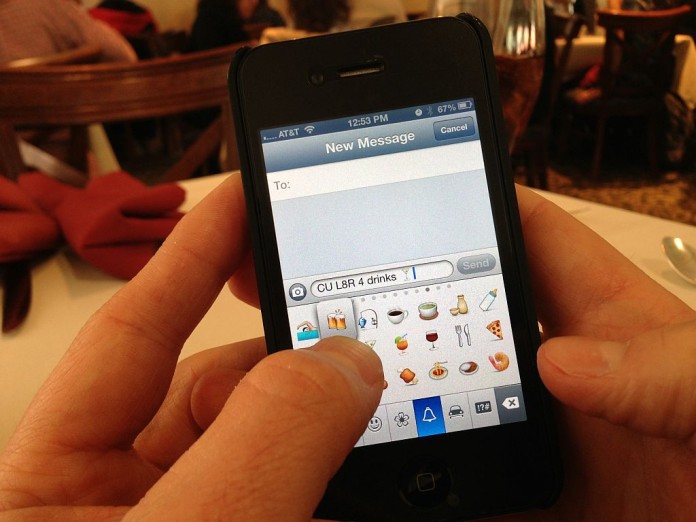 For those of us trying to brave the dating world of the digital 21st century it’s no surprise that most of the “flirting” we do is via text message. It’s easy to screw up a new relationship when you’re just getting to know someone by sending a stupid text. There are certain things that drive us absolutely bonkers when it comes to the unwritten rules of texting and these rules apply to you to ladies!

A HUGE texting turnoffs is poor grammar. Sending a text isn’t necessarily the same as writing a 10 page thesis – but if you don’t know the difference between your and you’re this can reflect a serious lack of care towards basically every aspect of your life. So even if you’re sending a quick flirty text remember that your spelling and grammar reflect the type of person you are – and bad grammar can be a huge turnoff!

Gone are the days of using MSN messenger or AOL Instant Messenger and the slang associated with it. A big texting no-no is using slang like “GTG, BRB or TTYL.” This just reminds us of the awkward prepubescent middle school days – which is a time period of our lives that most of us don’t wish to relive.

3. Taking Too Long to Respond

A general rule of thumb to follow while texting: Don’t start a conversation if you are too busy to actually keep up with it. I get that in the getting-to-know each-other phase of any relationship neither party wants to seem too eager but there is nothing more frustrating than waiting 7 hours for someone to respond to your text message. I see you posting on Instagram, Twitter, Facebook and Snapchat … Don’t pretend you weren’t on your phone.

There is something so annoying about receiving a text message that simply says “hey.” The conversation is pretty much killed before it even starts. If you’re attempting to start a conversation with someone over text have a conversation starter in stalk (flirty inside jokes are always great for this).

Although these lines are normally bad in any circumstance – when it comes to texting they’re just that much worse. Nothing is more uncomfortable than receiving a text from someone you’re interested in that says something along the lines of “Is this a war zone? Because you look like a bomb shell”.

It is a terrifying experience trying to initiate a hangout outside of the bar or party scene. It takes all of courage to text  “I’d like to see you again.” So, when I text you something along those lines, my anxiety is going to shoot through the roof when I wait for your response. I’m essentially expecting the worst, and of course that’s exactly what you do. “Yah let’s hangout sometime.” Seriously? Be a little more vague… Being unclear about the date, location, and time of a potential hangout comes across as not actually being interested enough to want to hang out. Instead you seem to be interested in keeping the lines of the communication open incase you find yourself with nothing better to do next Friday night at 1 a.m.

I, like a solid portion of the rest of the population try to go to sleep by midnight most nights. I kid you not I have actually woken up to texts messages that we’re sent at 3am saying things along the lines of “come chill rn”… Jeeze and I thought romance was dead! When someone you like texts you out of the blue after this time its annoying because 1. They clearly think of you as a booty call and 2. It’s difficult to know if you should reply or not when you read it the next day. So unless you’ve been texting all day and the conversation has just extended to the wee-hours of the night, you should wait until the morning to start a conversation.

The use of Snapchat as a means to flirt is one of the most annoying things to happen to the dating game. Snapchat is so much more impersonal and cold then just sending a text – plus if you have me on Snapchat then you have my phone number…. Use it!

9. Double, Triple, or even Quadruple Texting

Nothing screams, “I’m a stage five clinger,”  more than receiving multiple texts within hours of each other. I am addicted to my iPhone as much as much as the next girl, but when I get text messages of this nature I think to myself “seriously dude, pump the breaks!” If I didn’t reply I’m either at work, or in class, or I don’t have my phone on me (highly unlikely), or I am actively ignoring you (very likely). If I want to talk to you I will respond when I have the time to talk. Don’t double text me, I saw it the first time.

Dating today in the digital jungle can be difficult and overwhelming. The rules of dating aren’t exactly simple with texts, tweets, snapchats and posts – things can get complicated. If you’re genuinely interested in someone then don’t mess it up by turning them off with a stupid text message.