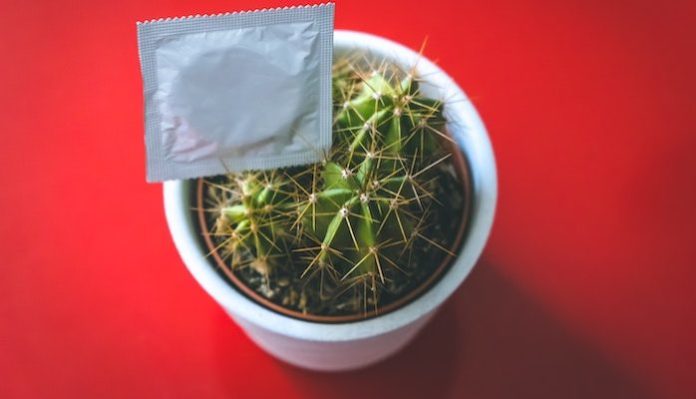 There are between 50 to 200 non-virgins per fraternity and/or sorority house getting laid every weekend. And that’s just Greek Life. Now, take into consideration the amount of non-greek affiliated students dicking around, and you’ve got yourself quite the incestuous little brothel we call a campus.

So when it comes down to that “did you bring one?” moment: who exactly should be bringing one?

Given the fact that it most certainly takes two to tango, it shouldn’t be weird for a girl to have a handful of condoms on her. But, that’s not to say she should have a complete smorgasbord of various brands, colors, textures and flavors all in alphabetical order and in half empty boxes — and neither should he. That’s just tacky. Remember, condom packs are divisible by three. If yours is not, don’t put that dwindling box on display for your partner (male or female) to see. Nothing kills the mood like flaunting how much P or D you’re getting on the side. For those ten to sixty minutes, your partner should feel like they’re the only ones in the world — regardless of whether or not that’s even true.

Some women feel that because it’s the guy who has to wear the condom, he should be the one to have to buy it. I understand the principle of what they’re trying to convey, but in the end, it’s your body and you should be selfish enough to take care of it. I shouldn’t have to tell you that not everyone is going to keep your best interest in mind, especially considering that many people say that sex without a condom is much more enjoyable than with a condom.

ANYONE who is planning, or even not planning, on having sex, should carry condoms. If not for yourself, do it for a friend and/or roommate in a pinch that would just end up bare-boning it if not for you. Save them the potential kid, bills, headache, and possible STDs due to a night of drunk uninhibited lust, or just plain stupidity.

But with respect to the title of this article, I’ll address the ladies.

Reasons why you should always carry condoms:

1. You choose what you use: This means that if you really like the ribbed kind, you can get the ribbed kind. (Because styles like that are all about you, not him.)  If you don’t want to be using a sketchy brand out of one of those condom vending machines in your dorm’s bathroom, you don’t have to use the sketchy brand from the vending machine in your dorm’s bathroom.

2. You know where the condoms came from: This is not to say that guys don’t know how to properly take care of condoms/don’t know how to read expiration dates. This just gives YOU that extra sense of security when you can avoid that post-sex stress of wondering whether or not it was previously left in a wallet or glove compartment for over a year.

3. Self-check-out lanes: You can avoid the “embarrassment” and “awkwardness” of buying condoms in a grocery store via self-check-out at either Wegmans or Tops. I swear these things were invented for shy sluts and not-so-closet douche bags. If you really need to use this option, by all means go for it. But remember, you should never feel embarrassed for knowing that you take care of yourself. You can also get them FOR FREE at Health Services — which I know sounds a little intimidating, being that many students are AT Health Services and might run into you stocking up for your weekend rendezvous, but I have seen frat boys literally pour boxes of condoms into their backpacks, so please: do not be embarrassed.

4. Help a friend: As I said before, you could be the reason your friend isn’t a mother or father at age 21.