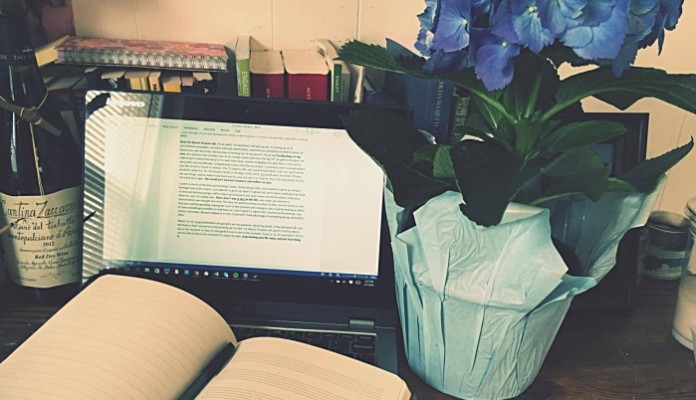 Writers have what I like to think of as two little brains living separately within the confines of their skull: Writer Brain and Normal Brain. These two brains rarely cooperate and often bicker. Normal Brain often acts as the simple, ever-present dog who just tries to do what’s best for his person. Writer Brain is the pesky, weirdly intelligent cat who likes to stop in every-once-in-awhile just to tease, pester and get some attention, but hides in the shelf when actually needed. I don’t think I have ever related to a quote more than when Georgia in Startled by his Furry Shorts by Louise Rennison, exclaims in her British accent, “Shut up, brain, shut up.” This is a phrase I say almost every day.

Because it’s so rare to get you to shut-up when you do make an appearance, I have written down four urgent questions I have for you.

First, why do you decide to show up at the most inopportune times? Truly, you are of no help to me whilst I take a shower. If I were to try to write what you said down I would end up with disintegrating paper. I guess I could write it on the wall in some sort of magic, waterproof ink, but my roommates would probably think I am insane. Which I guess I am seeing as I am speaking to the voice in my head. But, that’s beside the point. Often you appear while I’m leisurely walking through the woods. You come in the form of inspiration, like a small fairy magically waving her wand so that a trail of eloquent words appear behind it. I am in the woods, hence the words will not be written down, will soon fade, and go to waste. You also reveal yourself when I am trying to sleep. This is of no use to me. I love to sleep, so forcing me to rise up out of bed just to write whatever you dictate is an utter inconvenience.

Second, why do you feel the need to spew off speeches like I’m leading a movement? One of the reasons I write is so that I don’t have to actually speak, because when I speak what typically comes out is gibberish. Yet, as I lay in my bed at night I often find myself 10 minutes in, giving a beautiful speech to my best friend who I didn’t even know I was angry with or to my kidnappers on why they need to release me. Seriously? I have watched too much Scandal. Normal brain usually jumps in at that 10 minute mark and shouts, “shut up!” but your empowering speech just gets louder. Bedtime is supposed to be where I get peace and quiet, not where my two brains go at it.

Third, why do you narrate my life-like I am in a Rom-Com? When riding the bus, that is all I am doing. I am not, “blissfully watching the wet grass bend at the wind’s faintest touch.” You do not need to speak to me in third person like I don’t exist saying things like, “she saunters along the cobblestone street and in her daze stumbles over a loose stone.” I know what I am doing at all times (sort of). You do not need to remind me. I am a person, living a life, not a character in some book or movie. I am not Carrie Bradshaw.

Fourth, where the heck do you go when I actually need you? I love Normal Brain because he tends to keep thoughts benign and banal so I don’t feel exhausted after listening to him, but he is damn useless when I actually need to write. That is when you are supposed to help me out, yet you for some reason conveniently disappear. As hard as Normal Brain tries to get something on paper, it ends up reading like a fifth grader who just learned about descriptive imagery. I sometimes can hear you from afar, teasing me by whispering evocative phrases, but they aren’t loud enough to stick. In this instance, and only this instance, please come back.

Your Human (you know, that living thing you occupy in your free time)

I’m Not A Victim, But A Survivor Of Sexual Assault