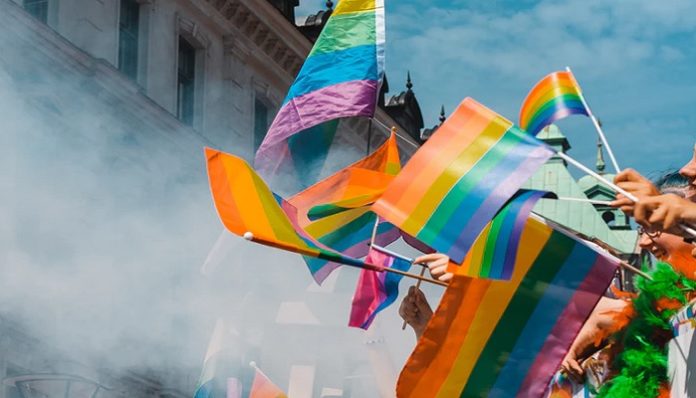 When I first became serious with my partner, who identified as a cis man, people were shocked. I was out and proud and fiercely queer. As I grew closer to my partner, though, I felt like I dropped too low on the queer-o-meter. Like my decade of dating almost exclusively women was outweighed by the gender of my current partner.

To this day, people who would have historically read me as queer seem bewildered when I out myself. “So, are you poly or what?” “Do you have a lot of threesomes?” “But isn’t your partner a dude?” “What’s the deal with ‘partner’ anyway?” “You’re straight now, right? I feel equal parts frustration and shame in the face of these invasive questions. All I can think is, “Why can’t I just be queer enough?”

The public perception of queer relationships can exclude queer people

There’s an elusive nature of belonging in queer communities.

How do we measure belonging? Well, trans and nonbinary youth who have their chosen names respected are less likely to experience depression, suicidal ideation, and suicidal behavior, and trans folks who feel they belong in a trans community experience better mental health outcomes. Dating and relationships can be a minefield of transphobia and misgendering for trans and nonbinary folks. Especially when seeking a partner and within relationships, making belonging elusive.

Bisexual+ people experience worse mental health outcomes than gay, lesbian, or straight people and “frequently report belonging in neither heterosexual nor gay and lesbian communities, while access to bisexual-specific communities is severely limited.” When queer communities refuse to recognize some people and relationships as queer, it negatively impacts the people in those relationships.

Shawn Wheeler, a cis, male, pansexual, bisexual woodworker from Providence, Rhode Island, is uncomfortable using the word queer to describe himself but feels strongly that it is the correct word to describe his relationship even if it isn’t always read as such.

In many situations, Wheeler’s partner decides not to correct those who misgender him, but it can be challenging for Wheeler. “People would almost rather hate me for being queer and get harassed…because we’re a gay couple seeming straight,” says Wheeler. He knows he doesn’t get too out of his partner. But when his partner is misgendered, Wheeler’s sexuality is also erased. It’s an unexpected and challenging refraction of erasure.

“We assume that because someone is in a relationship with a partner of a different gender, they must be straight,” they say, discussing one of their partner’s transitions and how it changed the way people read Katz Kattari. But they don’t agree: “Every relationship I’m in is going to be queer in some flavor because I bring my queerness to the relationship.”

Hana Low, a biracial, Chinese, queer, nonbinary, vegan nurse of color living in Denver, Colorado, has a slightly different perspective on what it means to be in a queer relationship. “Being in an intimate relationship with a straight person…can be difficult. Even if they’re a really kind person, they just don’t understand a queer experience,” says Low.

Vanessa Roberts also understands the feeling of erasure. “As a femme biracial woman, there’s not a space I walk into where I feel like people read me as a queer woman.” There are “intersecting assumptions that Black people don’t do gay and because I’m so comfortable with my femininity, I couldn’t possibly be gay.” Roberts is biracial, Black American and German, pansexual, cisgender, queer, and the executive director of Project VOYCE in Denver, Colorado.

Roberts’s partner presents as masculine and is often misgendered as a man. “We pass as straight, but at least we’re still interracial,” says Roberts with a laugh.

Queering relationships and breaking free of others’ perceptions

Even how we think about and foreground our perception can be an act of buying into a system of power and privilege. This privilege emphasizes whiteness, cisness, and straightness as the ultimate ideals of good.

“Part of queering relationships is letting go of someone else’s perception of what queerness looks like,” says Martin. “Queerness itself is liberating and freeing. It exists outside the confines of what is ‘supposed to be.’ When you commit to queering yourself or your relationship, you’re also committing to not getting caught up in other people’s perception of queerness and their relationship to it.”

As a counselor and as a queer person, Thomas echoes martin’s words while knowing how damaging isolation from such communities can be for queer people—and how necessary community is to resilience, sense of self, and survival. “When we don’t have it, it’s tough to take care of ourselves and feel known,” they say. “

Reclaiming queerness for myself

We’ve found a new balance in our queerness, a new intimacy, a new kind of trust in ourselves and each other because of our queerness. No small part of that is due to the way we’ve stopped paying attention to what others think of us. It’s liberating to know my queerness is mine and no one can take it away from me.

In Martin’s words: “I can’t operate and embrace my queerness at the speed other people are embracing it. I’m queer and I’m in a queer relationship and I’m going to enjoy that.”

Why Standing Up For Yourself Means Learning To Say No