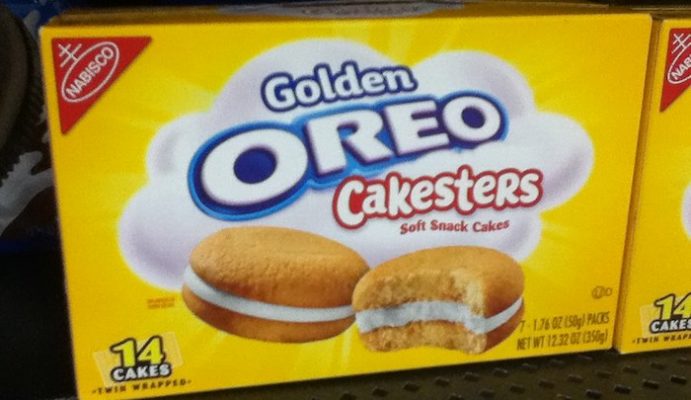 When we were kids, we each had that go-to snack that meant the world to us. Sadly, some of these tasty snacks are now discontinued. However, our kids will never understand the hype our favorite treats created since some of those beloved childhood snacks no longer exist. Here are nine discontinued snacks that we all miss:

No matter whether we prefer Flamin’ Hot Cheetos or the cheesy original version, we all love Cheetos puffs. But there was just something different about the letter-shaped puffs that put a smile on our faces while they turned our fingers orange! Those X&O Cheetos were next-level!

If you don’t remember these, just imagine a “stuffed” Oreo… then multiply its deliciousness by 1000, and you have an Oreo Cakester. These soft-baked Oreo “cakes” put every other cookie sandwich to shame, which is why they disappeared far too soon!

If you grew up in the 2000s, you can probably recognize the little yellow box from anywhere because it held a favorite – Altoids Tangerine Sours! We never thought that we’d miss that “pucker face” from eating too many Sours, but Altoids Sours have been discontinued for years.

Yes, it’s true – for a little while, you could buy Willy Wonka chocolate bars with “golden tickets” on some of the wrappers. Imagine debating which bar to grab and hoping it held a golden ticket inside! The fun clearly didn’t last long enough!

These chocolate granola bars, which came in M&M, Snickers, and caramel versions were oh-so-gooey. Kudos Bars also definitely puts all of today’s granola bars to shame. Anytime someone says “kudos,” all I can think about is the yummy bar that we all miss!

Snapple Mint Iced Tea was definitely a popular snack companion back in the day. Sadly, though, it’s no longer in stores. Snapple has so many flavors of tea, and this commodity was taken way too soon!

Move over cherry limeade, Diet Coke with lime is here – but unfortunately not to stay. If you remember the commercials for this refreshing drink, then you’re definitely a 90s baby. Mixing a typical soft drink with a lime flavor was all the rage during that time. Now all we have to drink is cherry limeade.

The Wonder Ball will always be the best snack ever. What’s better than a hollow chocolate ball with edible treats inside? The best part was keeping the box it came in to save all of the cool characters on it. Life just isn’t the same without this magical, wonderful candy ball!

If you remember the 90s and early 2000s, then you definitely miss these amazing treats that stores no longer sell. Hopefully, one day companies will decide to bring these snack-time favorites back so that we can enjoy them again! Although many snacks still fill our local grocery stores’ shelves now, they just don’t hit the same as these nine tasty treats.

Which one of these discontinued snacks was your favorite? Share with us in the comments!

You Don’t Have To Be An Expert In Order To Advocate...