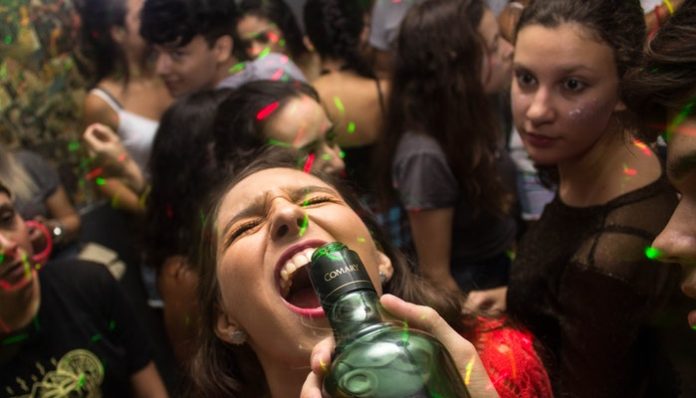 If you’re a college student, you already have a lot to think about. After all, things like filling out the FAFSA and deciding which classes to take next semester are tricky. However, you also need to make sure that you’re not letting yourself fall into unhealthy habits without recognizing them. One modern “college stereotype” that’s becoming a problem on university campuses around the country is drunkorexia.

The Eating Disorder Hope organization describes drunkorexia as a non-medical term for a person who engages in excessive drinking and eating disorder behaviors such as restricting, binging and purging, and/or compulsive exercise. In some extreme cases, a person may even use laxatives or diuretics to aid these destructive behaviors further.

There are two main reasons why young adults, and college students in particular, participate in drunkorexia behaviors. First and foremost, many college students feel very pressured to maintain a thin body, but they also feel very pressured to drink in excess at parties. Since alcoholic beverages typically contain large amounts of calories, students use eating disorder behaviors to “counteract” the calorie intake from alcohol.

Secondly, many people know that alcohol’s effects occur faster and more intensely on an empty stomach. So by engaging in disordered eating habits, students can essentially “get drunk faster” and feel drunker overall.

A recent study by the Research Society on Alcoholism found that an overwhelming 80 percent of college students engage in drunkorexia to some degree. Furthermore, this disorder doesn’t seem just to impact women — men report using eating disorder behaviors before or after drinking as well. However, students who live in fraternity and sorority houses seem to be the most prominent users of these behaviors, followed closely by students living in campus residence halls.

Why Is This Habit So Dangerous?

As you may guess, there are significant short-term and long-term consequences to drunkorexia that can severely harm the people engaging in these habits. In the short term, drinking in excess on an empty stomach severely increases your blood alcohol levels. This can lead to a higher risk of dehydration, blackouts, injuries, and poor decision-making.

Furthermore, those regularly engaging in these behaviors can end up with extreme vitamin deficiencies, leading to nerve and brain damage. Additionally, people who regularly engage in drunkorexia can end up hospitalized for alcohol poisoning, brain damage, or even organ failure. And, of course, excessive alcohol use itself can lead to social and academic problems like missed or failed classes, legal troubles, or family drama.

How Can You Intervene For A Friend?

If you notice these habits in a friend, you may not want to come across as overbearing or pushy. However, the team at Verywell Mind maintains that support from friends and family is critical for at-risk students. Regular contact with your friends can make a huge difference not only in their self-esteem and mental health, but it can also help you catch potential problems before they even start.

Furthermore, friends can support each other in maintaining healthy eating and drinking habits both on and off the college campus. Discourage your friend group from doing things like calorie counting, body checking, and other behaviors that can lead to an eating disorder. Also, remind each other that peer pressure isn’t “cool” and often fake. Although it may seem like everyone is drinking in excess at your school, studies show that nearly 60 percent of college students are not.

If you notice a friend actively engaging in disordered eating behaviors or drinking in excess regularly, encourage them to seek help through campus counseling services or even an outpatient therapist if needed.

And, most importantly, love and support your friend without judgement or harsh criticism because they need you.

Finally, students can encourage colleges and universities to provide regular education to students about the harm of binge drinking, especially when combined with restrictive food intake. Students can also push for their campuses to establish programs like Body Project, especially for high-risk populations like Greek life, student athletes, and students predisposed to engage in drunkorexia.

College is a stressful time for nearly every student, but nobody’s problems vanish with alcohol or unhealthy eating habits. Instead of reaching for the bottle or compulsive exercise to deal with your stress or frustration, seek healthy coping skills and the support of your friends instead. Together, you can all make it through college with that degree in hand.

Parts of This Article Originally Appeared on Moms.com