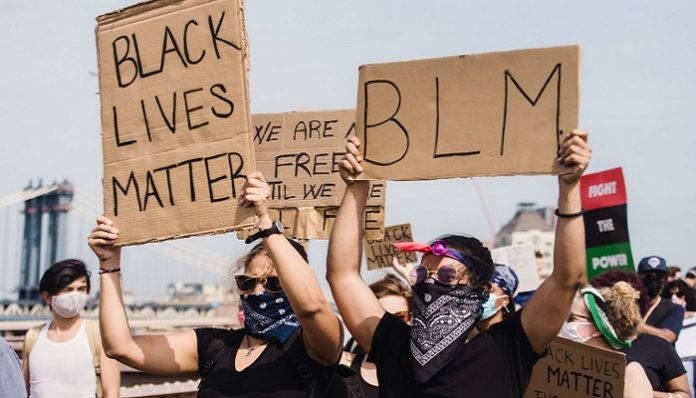 It was one of the last places on my list. Tired from looking at all the apartment listings on Craigslist, I was over the whole process of looking for an apartment in San Francisco, especially knowing that renting an apartment as a Black man with bad credit is considerably harder than it already is.

Finally, I settled on a place in the Tenderloin. Giving my rental packet of pay stubs and my credit report to the landlord, I waited as he looked over everything. Finally, he looked up at my nervous smile and said, “Son, this is the worst credit I have ever seen. How … What did you do?”`

But my story is typical of many in the African-American community.

Access to financial education, building credit, and saving money have been an ongoing challenge for Black men and women in the United States, and that’s because of one major factor:​ institutional, systemic racism in America and its role in creating wealth inequality (also known as the wealth gap) that continues pushing us down.

The Federal Reserve System’s 2016 Survey of Consumer Finances (SCF) shows a median net worth among Black families of $16,600. However, an article written by Antonio Moore and Matt Breunig for the People’s Policy Project explains, “When we exclude the family car, we get a somewhat different wealth narrative than the one being told across media platforms nationally. Without the family car, the middle black family has a net worth of $4,160. The middle white American family in contrast is still worth $140,600.”

As the Washington Post states, “The median net worth of whites remains nearly 10 times the size of blacks’. Nearly 1 in 5 black families have zero or negative net worth. That’s twice the rate of white families.” In addition, a 2013 report from the NAACP and public policy research organization, Demos titled “The Challenge of Credit Card Debt for the African-American Middle Class” found that “79 percent of African American households with a credit card carry credit card debt.”

In an analysis of data collected from three U.S. Department of Education surveys, the Federal Reserve’s 2013 Survey of Consumer Finances, and existing academic literature, Demos also found that “Black and low-income students borrow more, and more often, to receive a bachelor’s degree, even at public institutions.”

With our collective financial status currently so bleak, one has to ask, how did Black people get here? And why is the racial wealth gap so dramatic? To understand Black America’s lack of access to capital, we have to first look at discriminatory banking practices.

Historically, African-Americans couldn’t open banking accounts at mainstream (read: white-owned) banking institutions. This was due to Jim Crow laws enforcing racial segregation in the Southern United States. Because of this, African-Americans used Black banks to open checking and savings accounts.

After desegregation was upheld and enforced by the Civils Rights Act of 1964, the Voting Rights Act of 1965 and 1967 Supreme Court ruling in Loving v. Virginia, the number of Black banking institutions declined significantly. Racism and discrimination within the U.S. banking industry, however, continued.

When racist banks denied African-Americans bank accounts, we had to rent apartments and homes using cash. The only property many Black Americans owned was a car, which is a depreciating asset.

Black people had to, out of necessity, use exploitive check-cashing services, which charge fees to cash their payroll and benefits checks. Many also fell victim to the payday loan schemes, short-term loans with interest rates as high as 300 to 700 percent.

In general, the Black community had to make these poor financial choices because there were no other options. In our families, no one talks about financial literacy. Having been denied entry into the world of capital and financial planning, many of us have no idea how it works.

We were just trying to survive.

Growing up, I saw my mother handle the finances. As a single parent of two boys, my mom hustled and scraped together money to take care of us. Sometimes I would hear her negotiate with one utility company for extra time to pay that bill off, while other utilities and smaller bills would go unpaid in the trade-off.

My mother would stretch whatever money she had to pay on an outstanding bill. Our utilities were never shut off, but there were plenty of late notices. I don’t blame my mother. She did the best she could with what she had. I love her with everything I am. Raising two kids on her own, sometimes she had to rob Peter to pay Paul, so to speak.

Then in college, I was bombarded with credit card offers. Getting my first credit card was exciting. To me, it seemed like free money. I started thinking of all the stuff I wanted to buy. At age 18, I thought I needed things that, looking back, I probably didn’t need at all.

The card had a $500 limit and I ran it up like you would not believe. Five hundred dollars to a kid eating ramen and 25 cent burgers was a lot of money. And I spent it all. I didn’t understand the concept of paying it back. I just thought, “I’m young, it won’t matter.”

Unfortunately, this thinking continued throughout my 20s and even into my early 30s. As I began to make more money, I thought having good credit didn’t matter. I had some money in savings, a good salary, was able to travel, go to decent restaurants, and buy cool things. Also, I was paying for everything with cash. I had no idea how this was affecting my overall credit score. Or what the long-term consequences of that might be.

When I wanted to finance a car, I couldn’t go to a nice dealership. I had to go to an auto lot, put a couple thousand down and buy an older vehicle with an interest rate over twenty percent. When I would run my free yearly credit report, it showed so many collections it made my stomach turn. Phone services that were not paid, medical bills that never got taken care of, old credit cards, and miscellaneous bills came back to haunt me.

At one point, my credit was so bad I couldn’t even get approved for a gas card.

After living over a decade with a FICO credit score teetering at 515, I decided to do something about it. I got tired of having bad credit and living a life of cash only. I felt like I was on the outside looking in.

Bad credit, whether you want to believe it or not, is a reflection of who you are. As a Black man, I am already starting behind the eight ball, dealing with other people’s assumptions and prejudices. Knowing how many doors are already shut to me, I needed to try and tilt the game as much as I could in my favor.

After all, even with factors like income and loan size, minority borrowers are less likely to be approved for mortgages.

According to an article about credit inequality from CNBC, “The current credit scoring model ends up eliminating many African-Americans, Latinos, and young people that are otherwise creditworthy, making them in effect ‘credit invisible.’ Credit invisibility leaves a person unable to access necessities, since, besides homeownership, credit is used when a person applies for health insurance, car insurance, and even employment.”

In order to solve the problem of my bad credit, I obtained a copy of my credit report. Then I started by contacting all of my creditors and working out payment plans.

I used the “snowball method” of paying off my debt, which means I started small and then worked my way up. Soon after, I was accepted into a ”fresh start” program for people who want to rebuild their credit, and months later, I got a credit card that was not secured and started using it.

Vowing to never repeat the mistakes I made years ago, I would charge the card and pay off the balance before the due date. As I did that, more credit card offers came in and my credit score increased. I felt good about what I was doing, and my credit report was clean.

Today, there are many programs to help African-Americans gain financial literacy. Middle and high schools are starting to offer courses on how to create a monthly budget, such as $wagify ($avings and Wealth as Goals in African American Youth).

Financial expert Tiffany Allche, known as The Budgetnista, holds money management seminars in Black communities, having made it “her mission to empower women and provide them with access to the tools and resources needed to create a better life for themselves and their families.”

And John Hope Bryant, Founder, Chairman and CEO of Operation Hope, a non-profit organization dedicated to financial literacy and fighting economic inequality, aims to raise Black people’s credit scores as a collective to 700.

As a Black person, I recognize that our community holds little relative wealth in this country.

The racial wealth gap is real, and while I know that it will not be fixed without reparations, I have a responsibility to not only be fiscally healthy, but to teach others coming from behind me how to change the legacy of Black wealth in this country.

“It is not what you make, but how you save” is a phrase many people live by. And I now embody that completely.