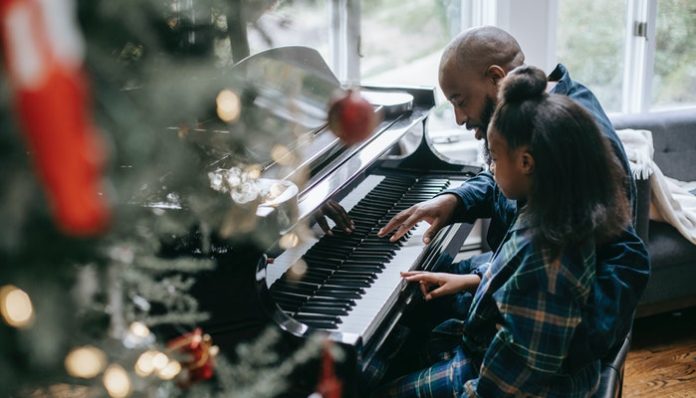 From Bing Crosby’s “White Christmas” to Mariah Carey’s “All I Want for Christmas Is You,” we all know and love classic Christmas music. But there are plenty of lesser-known Christmas albums that are unique and just as festive.

If you want to expand your musical horizons this holiday season, here are seven underrated Christmas albums to check out:

1. “If The Fates Allow” by the Hadestown Original Broadway Cast

Hadestown is a Tony Award-winning musical that tells the story of Orpheus and Eurydice through folk music and Louisiana-style jazz. And while Broadway remains dark due to COVID-19, the cast of Hadestown gifted fans this year with a holiday album.

Led by the three Fates in the musical (Kay Trinidad, Jewelle Blackman, and Yvette Gonzalez-Nacer), the album features vocals from the stars of the musical’s original Broadway cast.

Sleeping At Last is known for his ethereal orchestral arrangements. This Christmas album is no different, since he takes classic songs and puts his own stamp on them. Believe me, this album is the perfect thing to put on as you relax by the fire on a December night.

Although Leslie Odom Jr. showed his rapping and belting chops in the hit musical “Hamilton,” he actually shows us his softer side with this Christmas album. In fact, Odom’s voice is like butter, which lends itself perfectly to these calm, jazzy arrangements.

4. “We Need a Little Christmas” by Pentatonix

If you’re not listening to Pentatonix during the holiday season, you’re not doing Christmas right! All of their Christmas albums are incredible, but their most recent one, which came out this year, is one of their best yet.

It seems like this album sprang out of nowhere, so many might not know it exists yet. But it delivers fantastic, festive a cappella arrangements just like the group’s other Christmas albums.

Tom Chaplin, the lead singer of Keane, released his own Christmas album as a part of his solo career. This album is interesting because it doesn’t include any of the obvious Christmas songs people typically cover. In fact, the majority of the album consists of original Christmas songs written by Chaplin himself. If you’re looking for a different vibe than the usual Christmas staples, this is a good album to check out.

6. “Christmas: A Season of Love” by Idina Menzel

Though Idina Menzel became a winter icon after voicing Elsa in the movie “Frozen,” she took things a step further and released her own Christmas album.

This album not only features Idina’s one-of-a-kind vocals on classic Christmas songs, but also includes other stars, like Ariana Grande and Billy Porter.

Every December, choirs from around the United States gather at Walt Disney World’s Epcot Center and perform in a Candlelight Processional. It’s an epic show:  A celebrity narrator tells the story of Christmas while a giant choir and band perform a slew of famous Christmas music.

Unfortunately, like most things in 2020, Walt Disney World cancelled this year’s Candlelight Processionals. But luckily for us, one of the shows in 1999 was recorded.

Which Christmas album are you going to check out this holiday season? Tell us in the comments!

Feature Image by Any Lane from Pexels