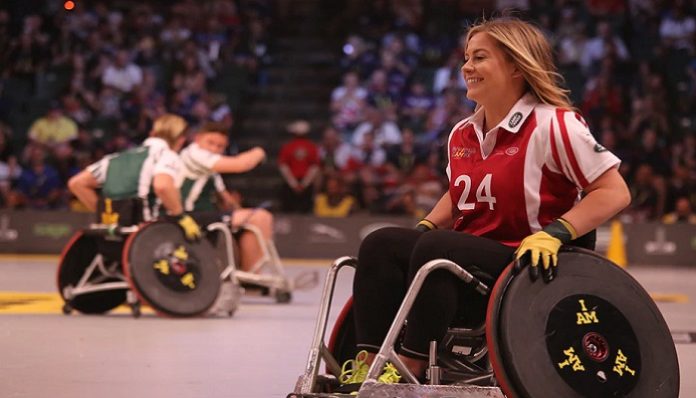 “I wanted to create a space to transform [the difficulties of chronic illness] into empowerment and unity for young women because being a young woman is hard enough without the added stress of illness—imagine having to fight your own body on top of fighting the patriarchy,” Shira states on her site, which now features guest stories from other women as well as an online shop for “the most badass babes around.”

The Sick Chick’s style is unashamedly millennial. It’s a collection for women who grew up watching MTV’s “Daria” and  aren’t afraid to tell the truth. “Kill the Bill, Not the Ill” is the snappy slogan that graces one of their popular most activist tees. Another beloved design is a long-sleeved tee featuring the words, “Sicker Than Your Average Chick” written on a pink box. It plays with current trends referencing the uber-famous Supreme red box logo hoodie.

But, other disabled women making fashion statements on the Internet, too.

Elsie Tellier, a 21-year-old who is diagnosed with atypical cystic fibrosis, uses her Instagram account (@65pinkroses) to showcase her flawless style. She’s a perfectly polished mix of pastel sweetness and 80’s retro hues. A Harvard student and disabled fashion blogger, this Mexican/French-Canadian rose to online fame after posting her pictures dressed up as Star Wars’ Leia Organa, prominently displaying her wheelchair styled with a galaxy theme.

On her blog, 65pinkroses.wordpress.com, Tellier describes her style as “a combination of both my birth mother and adopted mother’s tastes,” a killer combo of “classic, pink, and preppy looks” and more trendy styles. On her “outfit of the day” posts, Elsie Tellier’s customized wheelchair always complements her fabulous looks, showing the beauty of disability. As she proudly proclaims, “Wheelchairs are cute in every weather.”

Another obscenely stylish woman making a splash in the fashion world is Lauren Wasser (@theimpossiblemuse on Instagram). Wasser is an activist, actress, and model. Lauren had both of her legs amputated after nearly dying from Toxic Shock Syndrome at age 24. Now, she frequently shares her boyish, cutting-edge monochrome looks on Instagram. She also reaches out to other T.S.S. survivors using the hashtag #itsnotrareitsreal. Lauren asks her followers to help collect stories as she continues her “fight to raise awareness” for women’s health.

Wineland, 21, was an activist, entrepreneur, YouTuber, and author living with cystic fibrosis. Claire was a Wes Anderson/J.D. Salinger character lovechild, only smarter and funnier. With her “pedophile glasses” (her words, not mine) and wispy bangs, she made talking about death from her bathtub seem so effortlessly cool. Adamant about dismantling myths, she once took to Instagram to write about the way sick people are captured in media. “Seeing people who are sick as anything complex and intelligent would mean we couldn’t use them as these false beacons of hope,” she stated in a post praising photographer Larissa Peroux. The photo captured her in a basic white tee made impossibly stylish with her signature glasses and a low ponytail.

Claire died last September due to complications from her double lung transplant. Now, the Claire’s Place Foundation spreads her message of finding beauty in sadness by redefining how sick people are portrayed. She also served as a consultant on Justin Baldoni’s upcoming movie Five Feet Apart, in which her message of treating yourself so you can live shines through beautifully.

These four women aren’t just impeccably stylish; they’re actively working to change perceptions of chronic illness and disability. As they work to break barriers (and strut their stuff along the way), their perseverance, resilience, and lust for life will captivate you, and they are sure to become your latest role models.