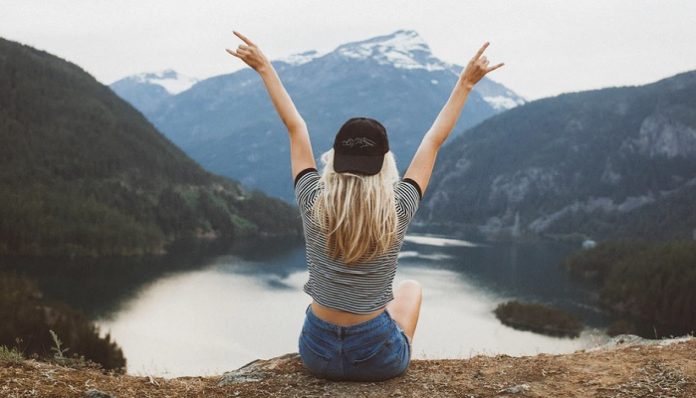 I used to be what is known as a serial monogamist — I hated being single, and my track record made that abundantly clear. I love love, so I accepted things in people I shouldn’t have. So I accepted neglect, abuse, and lying. Someone could have sent me a box of red flags via Amazon Prime, and I still wouldn’t find fault in them. So after some extremely toxic relationships, I took a step back from dating.

I attempted casual dating which I had not done before — yes I went from one relationship to the next, but I had never actually gone on a dating spree. I always jumped from one relationship to the next. So, there I was, on a couple of dating sites (which I had never done before), but it was overwhelming. I met a couple of really great people, but I wasn’t feeling it. I hadn’t taken the time to heal so I couldn’t move on. I’m pansexual, so the dating pool was too deep for me. Everyone had been so nice, but I was jumping into the deep end when I couldn’t even swim. It was time I learned how to swim on my own.

I decided it was finally time to focus on myself. I’m a very selfless person, so this was uncharted territory for me. However, I started off with a bang.

I went and bought myself a bra from Victoria’s Secret and got a mani/pedi. It doesn’t sound like much, but not only did I spend money on myself, I also went alone. Going shopping alone was something very new for me. I started to make this a routine on paydays. When I would get off work there was a mall on my way home. I’d go to Sephora and was finally able to buy makeup I thought I’d never own. I’d get the clothes I needed because I had lost so much weight. The clothes I got were outfits I finally felt brave enough to wear. I spoiled myself which I’ve never let myself do before.

When I would go to the mall, I took myself out on dates after shopping. Sometimes it was coffee and macaroons, sometimes it was just a milkshake, but it was something I needed. I learned I can take myself out on dates and love myself. I had never felt so empowered in my life! Finally, introverted little old me was doing something amazing for herself. I still had my headphones on and blasting music to combat my anxiety though. However, it started becoming my new routine so I was feeling less anxious day after day.

I started going to parks for long walks and enjoyed the cool summer night air. I was at peace with myself for the first time in my life. What’s more, I loved my own company which previously I hated. I truly took the time for me. Also, I picked up amateur photography which I still enjoy to this day. I stopped focusing on how strangers would perceive me in public and shut them all out. It was my time and I made it my priority.

I started saving up for the things I had wanted for years. I still spoiled loved ones, but I spoiled myself too.

My ex would always control my finances so I never had money to save. So now I got tattoos I wanted, got my hair done, and the clothes I needed — I took care of me. Dropping a ton of weight was a big deal as well. My life started revolving around self-care and I gained so much confidence I never knew I could. I even pursued my dreams of modeling and I was shocked I was capable of such a thing! I went back to therapy as well because I knew I needed it. This took guts on my part, but I was determined to finally improve what I disliked about myself. I needed to get out of my comfort zone to really understand what I needed and deserved. What’s more, I embraced the things I couldn’t change about myself. I finally realized I didn’t have to be perfect to love myself.

After all that time, the universe provided what I least expected — I found someone that met the standards I made. Nevertheless, there was no way I was going to risk my progress and allow myself to ignore red flags again. All that time I dedicated to myself healed me. I didn’t need a relationship to heal me this time because I did it on my own. I didn’t need to depend on anyone. That’s precisely how I knew I was ready. A relationship didn’t define who I was anymore.

The point I’m trying to make is to focus on yourself and dating yourself.

I know it sounds impossible to some and cliche to others. I promise you, if I can do it you can too. Take the plunge and get to know yourself. You’ll figure out your desires, your needs, and, most importantly, how to love yourself. At the end of the day, you are all you have. Just remember: Even if the right relationship doesn’t find you, you’re still whole. The relationship you build with yourself is the most important relationship you’ll ever have.

You are the person you’ll spend the most time with. Don’t you think it’s time to love that person? And if you still don’t, work on the things you aren’t happy with. Accept and love the things you cannot change. I assure you it’s possible to love you. You’re worth it!