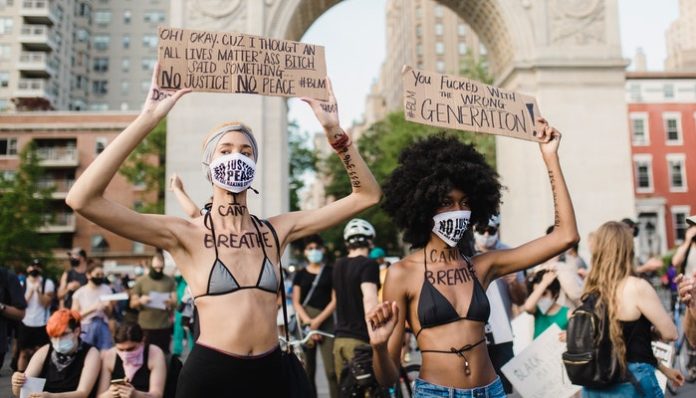 There are many ways in which white Americans perpetuate white supremacy in this country. While there is by no means a comprehensive list of every day racist microagressions and actions committed by white people, I’ve noticed a pattern in some behavior, especially since after the 2016. I’ve compiled a list of at least 10 things white Americans need to stop doing, like, yesterday, and while this list mostly applies to white Americans (and, to an extension, my personal experience as a Black American woman), much of this rhetoric also applies to non-American white people and affects other people of color.

1. Get pissed when someone casts a nonwhite person to play a white character.

The outrage of Ariel from The Little Mermaid being played by Black actress Halle Bailey in the live action remake was purely anti-Black backlash. Ariel and other characters aren’t historical figures. Therefore, we don’t need to cast a specific racial or ethnic group for the part. So why do people complain about “changing” a fictional character’s race in the first place? If it doesn’t change the story, it’s simply racist backlash.

In direct contrast to the first point I made, the same white people don’t get nearly as angry when the media whitewashes fictional and historical figures. I can’t count the number on my hands how many historical figures have been whitewashed in the media. Cleopatra was Egyptian, and Jesus was brown, yet white actors almost always play these roles.

3. Call the cops on Black people.

Nine out of ten times Black people are just living their damn lives and not bothering anyone, but we get the cops called on us anyway because we “look” suspicious (because we’re Black). Karen jokes aside, this is a serious issue that leads to police officers harassing — or assaulting —  black people due to the officer’s own racial biases.  At worst, it’s led to violence, death, and other repercussions that should have never happened.

Blue Lives Matter, All Lives Matter, and general complaining about riots are all manifestations of anti-blackness. Criticizing violent protests is hypocritical when you ignore all the violence and murders the police willingly commit against Black people and other minorities every day. Most protesters aren’t even violent, yet the media perpetuates this racist perception.

5. Tell Hispanic and Latinx folks to “go back to Mexico.”

Firstly, not every immigrant is Mexican. Secondly, not every Hispanic or Latinx person is an immigrant. And thirdly, most American people’s ancestors were immigrants, so not liking immigrants is extremely hypocritical. Hispanic and Latinx immigrants aren’t more likely to commit crimes than white Americans; they aren’t massacring an entire race of people and stealing their land. The horrendous crimes white people committed against Indigenous Amercians is not the same as someone who’s undocumented living in the country. (There’s also the fact that immigration laws have a racist background, but that’s a whole other topic.)

America is not the best country in the world, nor is any other western county. Colonialism was and continues to be perpetuated by white people and gives them a sense of false superiority. No one’s better for being a western culture or “developed” country; most of America’s wealth and notoriety came from stealing, enslaving, and murdering people of color.

Politics not affecting someone individually is the ultimate sign of privilege. When someone doesn’t have to worry about your rights being stripped away, being attacked by the police, imprisoned by immigration “reform” systems or otherwise persecuted in their everyday life by those them and in power, they are living a privileged life. We never know what anyone else is going through, so just because something doesn’t affect one person personally doesn’t mean it doesn’t affect someone else. More likely than not, politics do affect everyone because they govern our society, and we all live in society.

It seems that the white person who claims to not care about politics is the same person who votes for bigoted politicians. There’s a reason people like Donald Trump are in office now, and we won’t have better people in office until we stop voting for politicians who don’t have everyone’s best interests at heart.

Complaining about lack of “religious freedom” in public schools,  saying “the Irish were slaves,” and arguing that Affirmative Action is “reverse racism” are just a few common accusations white people come up with when they claim they’re facing the same oppression as people of color. But none of it is true. The religious freedom argument never applies to non-Christian religions (especially Islam), the Irish were never slaves, and reverse racism doesn’t exist in a world where institutional white supremacy reigns supreme.

White people literally invented race. Race is a form of classism that puts white people on top and everyone else—especially Black and Brown people—on the bottom. And while the modern-day white American may not have directly “invented” racism, they not only directly benefit from it but perpetuate it in their every day lives. I’d love to live in a world where my Black skin didn’t affect the way people treated me, but the fact is we’re not living in that world and have to acknowledge the social construct of race so we can work to confront racism.

Black people are tired of dealing with this. Brown people and other folks of color are tired of dealing with this. It’s been going on for years and while the words and actions may have changed, the racist ideologies haven’t. The only way we can move forward and make progress as a society—a society that truly cares about us all, not just white people—is to acknowledge the inherent white supremacy in this country and start dismantling it.

Everything You Can Buy With A Wedding Budget (Besides A Wedding)