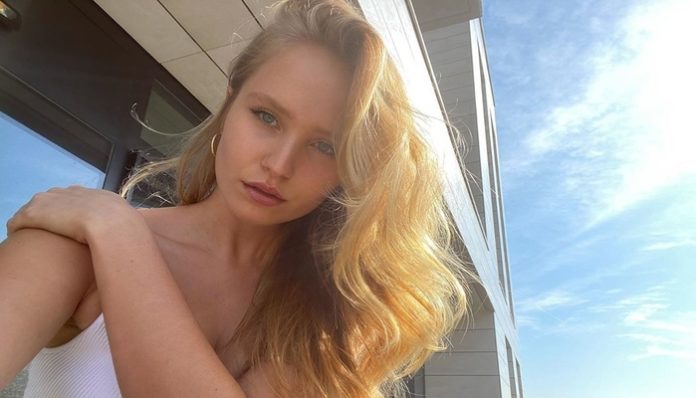 On May 24th, Sailor Brinkley Cook, the 21-year-old daughter of former model Christine Brinkley, wrote a poignant Instagram post that addressed her struggles with body dysmorphic disorder (BDD). “I’m so f*cking sick and tired of Photoshop, I’ve been so down on myself recently. Crying about my cellulite, letting the fat on my body ruin my day, getting mad that I’m not as skinny as I once was. The body dysmorphia and leftover eating disorder tendencies are coming in strong,” she began the post that garnered over 16,000 likes on the popular social media platform.

The former Dancing with the Stars contestant delved deeper into the particulars of how photoshop and Instagram filters play into magnifying her BDD, writing “I go on Instagram and scroll through photos of girls that look ‘perfect,’ shiny skin with not a bump to be seen, tiny little waist[s], and thighs that look like chopsticks.” She then questioned how the appearance of “someone on an app from my phone” easily affects her feelings about her own body. She explained that she no longer wants to feel shame, declaring that she’s a “100% imperfect human.”

She also shared that she’s “proud as hell” of her body.

Cook ended the post with a message of self-love for her followers. She stated that they should “appreciate” themselves and proclaimed that their bodies are “magical.” In an interview with GMA following her viral Instagram post, Sailor Brinkley Cook delved deeper into living with an eating disorder. She shared that her BDD first appeared when she was a teen model. Sailor also recalled how she hid her symptoms from her mother. She didn’t want her mother to know how painful the disorder was.

As I read Sailor’s Instagram post and watched her interview, I felt relief that someone finally spoke up about BDD. I felt happy that Sailor spread awareness of body dysmorphic disorder because it’s a struggle that I’ve faced myself.

BDD is a body image disorder involving persistent and intrusive thoughts about an imagined or slight defect in one’s appearance.

Those with BDD can struggle with any part of their body. But common body parts that BDD sufferers find fault with include hair, skin, nose, chest, and stomach. Body image issues, eating disorders, social anxiety, and OCD can also weave themselves into BDD, which makes recovery extremely complicated. BDD also affects only 1.7.-2.4 percent of the general population (1 in 50 people). Because of this, so many without the condition don’t fully know how loved ones who grapple with BDD.

The common symptoms that BDD sufferers have involve repetitive, compulsive behaviors that may hide, fix, or take attention away from their perceived flaws. There are various manifestations of symptoms, but they include preoccupation with comparing perceived flaws to others. Moreover, people with BDD may seek cosmetic surgery, and or shop excessively for makeup or clothes. People with BDD may also experience social anxiety and camouflaging their perceived flaws with hats, sunglasses or excessive makeup. Low self-esteem and a deep sense of self-loathing fuel the negative beliefs that people with BDD often hold about themselves.

Loved ones can combat these beliefs by reassuring their friends with BDD that they love them for who they are.

Those who want to help those they know with BDD can provide space to for them to openly discuss their feelings. They can also steer conversations away from perceived imperfections and celebrate the small steps in fighting this battle. Those who want to help can also encourage the sufferer to get help. The best thing you can do is help your friend if and when they’re ready. In the meantime, simply provide a listening ear.

Sailor Brinkley Cook’s Instagram post revealing her fight with BDD is a powerful beginning in helping those who suffer from body dysmorphic disorder feel less alone. We can continue the conversation by discussing body image issues with friends and tell our friends with BPD to trust in their own strength, see their own beauty, and take recovery-oriented steps to live their best lives. Sailor Cook Brinkley is paving the way for people with BDD to find the understanding and care they need to recover from this life-altering eating disorder.

Trust Me, You’re Not The Only One Who Feels Lost