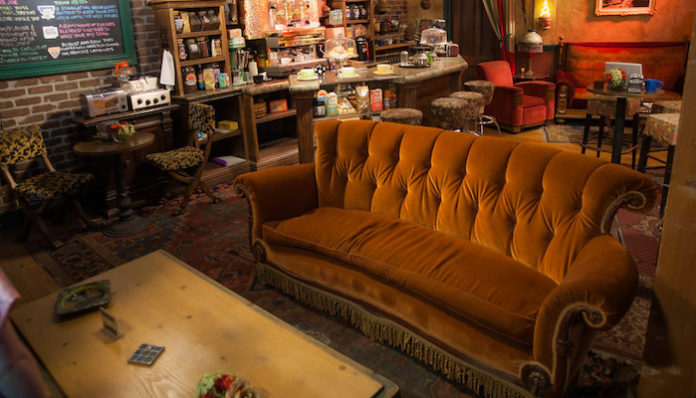 If there’s one show that encouraged coffee culture, it would be the hit series Friends. Every episode featured at least one scene in the infamous hangout spot, “Central Perk” and showed many of the cast sipping fresh brew. (Fun fact: Phoebe drank the most coffee in the entire series.) Throughout the duration of the show, coffee shops everywhere noticed an increase in attendance where real-life friends would hang out.

While “Central Perk” doesn’t exist, you can now indulge in some Friends-inspired coffee drinks at Starbucks. I know, can we be any more excited!?

Coffee addicts around the globe have started noticing that many locations have started featuring their own Friends-themed drinks based on references, orders of the actual actors while on set as well as the characters.

Starbucks lovers in this small town say this bright pink beverage tastes like raspberry creme candies. The manager at the location who created this drink says that the colors of the drink are to remind viewers of the comfort and brightness of Monica’s apartment.

This location doesn’t just have one Friends-inspired drink — they have 6 that represent each of the main characters. The baristas created drinks based on what they feel each character would order in real life.

Here are the character drinks you can order at this location (and how to order similar drinks at your location as well):

“The Chandler” is a Starbucks Doubleshot or a Salted Caramel Mocha. The Double Shot is commonly referred to as a “Doubleshot On Ice” and contains two (or more if it’s a larger-sized drink) shots of iced espresso with a splash of milk served over ice. Could it make you any more hyper?

“The Rachel” is a Skinny Caramel Macchiato with an added espresso shot. Very basic to match the original Basic Bi*ch, Rachel Karen Green.

“The Monica” is a Nitro Cold Brew. But if you don’t like iced coffee and prefer it hot, black coffee with an added espresso shot can also suffice. If you’re ordering it online or on the app, then you can add the shot in the “Espresso & Shot Options” menu.

“The Ross” is a flat white. But if you’re feeling super ambitious, a Blonde Flat White will also do as both options are predictable and sophisticated. Plus, the names sound kind of monotone and boring, much like Ross.

“The Phoebe” is a Coconut Green Tea Latte. Naturally, it’s holistic sounding, relaxing and very zen to match Phoebe’s hippie-like appearance and personality. To order through the app, select “Coconut” under the “Milk Choices” submenu under the “Milk” menu.

“The Joey” is a PSL Frapp mixed with a White Chocolate Mocha (it’s the iced version of the popular Cinderella Latte.)

“The Joey” also has another version of the drink, otherwise known as the Cap’n Crunch Frappuccino. Fans know that Joey was a huge fan of this cereal and have often linked this specialty drink with the character. You can get this recipe in its entirety here.

The menus vary between each location, so you may not be guaranteed identical ones at all spots.

But the chances are that you can get at least one Friends-themed brew. And if not, you can at least order drinks based on what the characters might order as listed above. Much like any Starbucks creation, you can totally create your own and name it what you want. However, these suggestions from Modesto, California are pretty spot on and you can order them anywhere.

Thank you to the baristas who have created these drinks to commemorate one of the greatest shows on the planet! Because this is now going to encourage a bad coffee habit we’ve all been trying to quit.