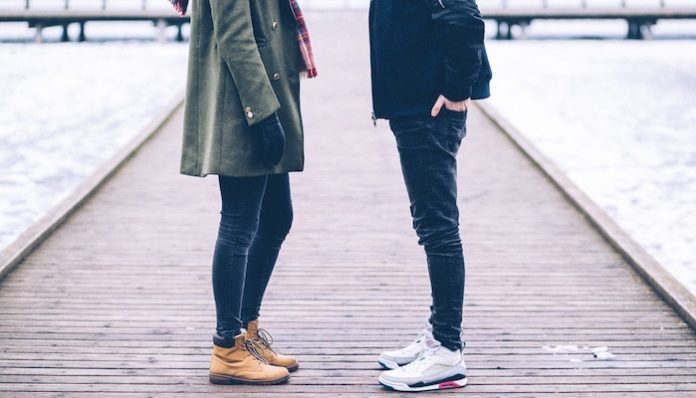 When someone has been a big part of your life for a long time, it’s really hard to imagine your life without them. It’s only natural to make an effort to keep them around — there’s comfort in having them there. Consequently, it can be very difficult to go from being lovers to friends with an ex after a breakup. If you weren’t friends with the person beforehand, you never learned what a friendship with them looks like. Plainly speaking, you don’t know how to be friends with one another, and you can’t interact with them as friends the way you did when you were dating.

The reality of it is simple: every relationship is different. So it’s  hard to know if the fantasy of a friendship after love is possible. For some people it works, for others it’s a disaster. But if you are optimistic and determined, or if you’re in a situation where you have to keep seeing each other after breaking up, there are some ways to make the transition easier.

1. Identify your own desires, motivations, and feelings towards making this friendship work.

If you are focused enough and feel like it would be beneficial for your long-term goals to have this individual in your life, then go for it. But you should seriously evaluate your motivations before jumping into a friendship. If you’re holding out hope to get back together, or if you’re still physically attracted to them, then don’t commit to a friendship because that wouldn’t be best for you as you try to move on.

If you attempt to patch things up far too quickly, someone is bound to get hurt. You need to reflect on the relationship ending and come to terms with the fate of your future together. If you’re hoping to rekindle the romance, a friendship right away may not be the best solution as it will only hurt you both more.

You need to be clear on what you are and aren’t comfortable with. For example, you might be okay with hanging out at the bar together but are not cool with seeing them hook up with someone else in front of you. Similarly, they may have some boundaries as well. Be clear about your expectations and communicate them clearly and early on. And continue to communicate if anything else comes up.

You can’t expect that they will still be a quick texter or will only want to sleep with you. Look at this newfound friendship from a new place and get to know each other in a different way. This could be in the form of shopping at a farmer’s market or visiting a new bar you both haven’t been to yet.

5. Allow it to happen naturally.

The two of you have already had some intimate and vulnerable moments together so it’s okay to need your own spaces in the beginning. You can’t push a friendship that simply isn’t there. If it seems right to initiate a hang out, or go to the movies, do it. But if it feels safer to allow them to contact you, do that instead. Allow it to play out naturally.

I’m not going to lie, friendships after relationships are often most successful for the relationships that were very casual and low maintenance. It’s much more difficult after a long-term relationship that was moving in a serious direction. Either way, it’s okay to be friends or not be friends — don’t feel like you’re locked into one or the other.

Personally, I’ve maintained a friendship with one of my exes for over four years now, and I credit its success to us starting from a clean slate and letting it develop at a natural pace. Sure, it was hard at first only seeing each other once a month and texting once or twice a month, but it became the new norm. Plus, it allowed me to  move on to someone who was a better fit for me romantically.

It is possible to be friends after being lovers, but don’t expect to avoid growing pains. It’s natural to happen but can be totally worth the wait.

Featured image from @freestocks via Pexels.