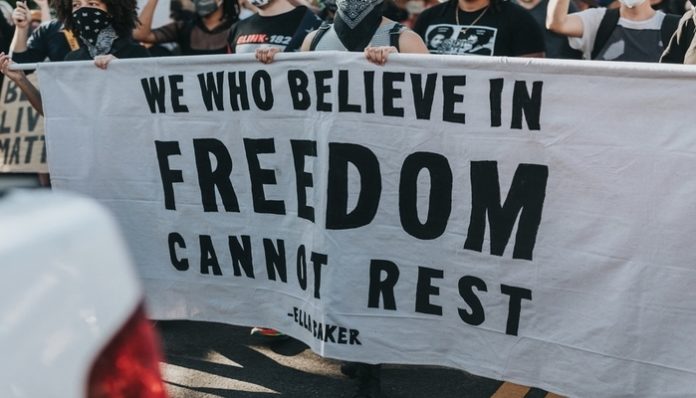 In current news, Black lives have been locked away and hidden as if they were nothing throughout all of history. The fight for Black equality has always been important, and visible, but the anger has bubbled up to its maximum capacity during the current police brutality crisis in America. Racism shouldn’t be a debate. Fighting for anyone’s lives shouldn’t have to be a fight, but it is reality.

Here are 11 reasons why your voice matters, and why black lives need your help:

Everyone deserves to have equal rights; to live without fear. The only way we can fix the problem of inequality and racism is by involving every single voice that we can.

Despite all of the protesting, the looting, the begging, and pleading that has taken place recently to attempt for black lives to simply matter (just the bare minimum), there is a chance that another unfortunate situation will arise in the future, leading us to go right back to where we started. Racism doesn’t just disappear. Hating others doesn’t just disappear. This will be a forever fight, and we need to always be ready for it.

We need to speak up for others, especially the ones who are too afraid to speak for themselves. Whether it’s from fear, or from someone attempting to silence them, everyone should be heard.

From slavery, to segregation, to police brutality, black people have never truly been treated properly. It is a cycle that has continuously taken different forms throughout history, all the way to modern-day. There’s only one correct word for it: racism.

While a lot of this fight needs to happen in America, it is also needed all over the world. Racism is taught all over the world, in various forms. Teaching peace, and equality everywhere is a much-needed step we have to take.

Our ancestors always fought for what they believed in. Now is the time for us to all do the same, especially since we’re still fighting the same fight. We need to follow our ancestor’s footsteps, and our children will do the same for us.

It can’t just be the same few people in the world who need/want to fight for black lives, it takes every single voice. We need your voice!

Whether or not you have black friends and family in your life, you should be supporting them in any way that you can. Don’t just do it for the people you know, do it for the five-year-old child whose mother may end up in jail, or murdered due to false accusations, or no reason at all. Do it for anyone. Simply do it for humanity.

Despite whether or not you want to see or hear about it, racism is happening. It’s not going anywhere and it will forever stay, even when it’s hidden and disguised. This is why the black community needs your help.

I don’t know about you, but I’m sick of fighting the same fight. I’m worried that no matter what we do, we will never get anywhere. What worries me is that my children will STILL be fighting for what I am.

Black lives need to be accounted for, supported, and treated equally. The world has a choice. You have a choice. Speak up for what’s right, change the course of this world, and set an example for the next generation. We can make change, even if it will take another 100 years. Let’s do this together. Your voice matters. Your voice makes a difference. Speak up.