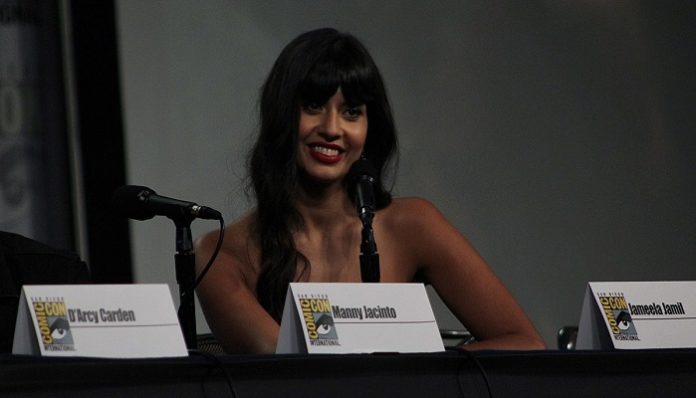 You might remember hearing about British actress Jameela Jamil back in September. She made headlines for lashing out against the Kardashians. Jamil called Kim “a double agent for the patriarchy” because of her Instagram endorsement of weight loss products. Kim K  advertised appetite-suppressant lollipops.

“It’s [like] a wolf in a sheep’s clothing. Just because you look like a woman, we trust you and we think you’re on our side, but you are selling us something that really doesn’t make us feel good…. You’re selling us self-consciousness,” Jamil said of Kim K in an interview for a Channel 4 podcast.

Ever since that interview, the 32-year-old has refused to slow down in her fight for body positivity. She recently wished “public diarrhea” upon celebrities like rapper Cardi B for openly promoting detox teas to fans. And now? Jamil is taking a stance against airbrushing.

People were quick to declare their support for Jamil. Many Twitter users embraced her boldness and courage in speaking out against a very real issue that affects millions of women and girls every day. However, other tweets were not so kind. Some blamed the actress for slut-shaming women and using the wrong kind of feminist tools.

At the end of November, Jamil tweeted that “Feminism is about equality, and that means also being equally responsible for the well-being of all other women as we expect men to be. Most of us are just Feminists-in-progress and we always have more work to do.”

But, here is the thing: Jamil makes a totally valid point.

While slut-shaming women and not allowing them to express their sexuality freely will never be ok, Jamil does strike a chord. She opens our eyes to the truth about an industry that profits from selling “self-consciousness.” In order to understand Jamil’s point, we need to take a quick look at every ad that targets women. Oh, and let’s not forget who we see in these very ads.

How many times have powerful celebrities like Nicole Kidman or Eva Longoria tried to sell us some miracle anti-aging cream? To help us remove our cellulite or stretch marks? Kidman and Longoria have been outspoken activists, especially in the #MeToo movement. Still, influential women like these have shady advertisement deals. Women and girls see these ads worldwide.

Therefore, celebrities like Kidman and Longoria are still a part of the problem they are so loudly speaking against. As Jamil stated, we trust them as women and think we are on the same side of the battlefield as they are. But, it is clear that we are not. They are selling “a problem with wrinkles, with aging, with any kind of body fat, […] and recycling hatred.” All that hatred wreaks havoc on our minds and our body-image. It twists the way we see ourselves and the way we think about our bodies. Ultimately, all that recycled hatred leads to body dysmorphia, self-harm, and mental health issues.

“For our gender to evolve we need some sort of constructive criticism,” said Jameela Jamila during the Channel 4 podcast.

In order to evolve from these harmful stereotypes, we as women need to come together. We need to recognize the harm we are allowing our fellow women to do to our gender. We need to be unforgiving, and we need to call out any woman who might be doing us a disfavor. Body positivity starts with speaking out against women who proclaim their support for feminism and then sign deals that go against everything it stands for.

Featured image via aitchisons from United States / CC BY