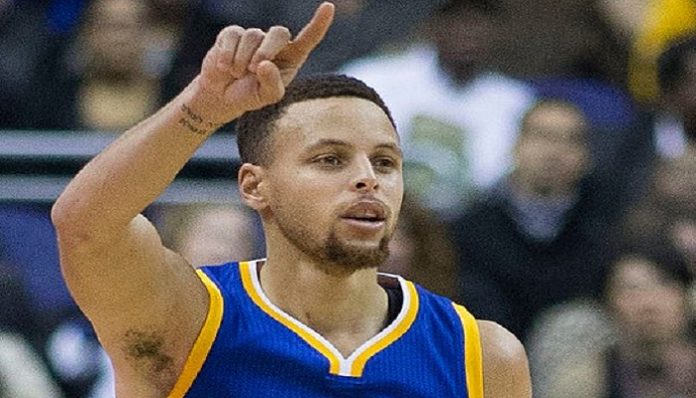 You may know him as the point guard for the Golden State Warriors. Or the dad in that adorable Instagram family. But Stephen Curry is striving for a new title in our hearts; feminist.

In a powerful essay penned for The Players’ Tribune, Stephen Curry shared his thoughts on gender equality after he heard his daughter Riley’s dream job. The 6-year-old proudly declared she wants to be a “basketball player cook” when she grows up. Clearly wanting to be a baller like her daddy and a celebrity chef like her mommy, Ayesha Curry.

While he admits Riley’s dream might only be short-lived, he recognizes that she wants to be just like her parents. It was a moment of realization where he quickly learned that his kids are watching their every move. So, he needs to work harder at becoming a better role model for them.

“And in all seriousness — to have a daughter who thinks her parents are alright enough role models that she wants to be like them… It’s a blessing,” the 30-year-old player said.

Then he dug deeper emotionally and noticed the kind of world his daughters Riley, and Ryan, 3, are growing up in. This caused him to reflect and work at a way of trying to change society for the better by bringing awareness.

“I’d be lying if I didn’t admit that the idea of women’s equality has become a little more personal for me, lately, and a little more real. I want our girls to grow up knowing that there are no boundaries that can be placed on their futures, period. I want them to grow up in a world where their gender does not feel like a rulebook for what they should think, or be, or do. And I want them to grow up believing that they can dream big, and strive for careers where they’ll be treated fairly. And of course: paid equally.”

He’s making it very clear that father’s of daughters aren’t the only people who should believe in this. Every person should be aware of what’s happening around them.

Of course, he also contributes his beliefs on feminism to the strong women in his life. Such as his mother and his wife Ayesha. “One lesson from that education that’s really stood out to me is: to always stay listening to women, to always stay believing in women, and — when it comes to anyone’s expectations for women — to always stay challenging the idea of what’s right.”

Curry, also has begun to reflect on what it is like to raise a son. And how to help him become a feminist too. The couple welcomed their third child Cannon earlier this year. Stephen Curry, admits that his role of being a father to a son, and a role model to young men, is important in terms of educating them on positive things.

“I think you teach him to always stay listening to women, to always stay believing in women, and—when it comes to anyone’s expectations for women—to always stay challenging the idea of what’s right,” he writes. “And I think you let him know that, for his generation, to be a true supporter of women’s equality. It’s not enough anymore to be learning about it. You have to be doing it.”

In additional efforts to do his part in being an example of promoting women and young girls to follow their dreams, he opened up about hosting a basketball camp for girls. They combined learning skills on the court. And having a question and answer period with successful women in sports and business. In the hopes their impressionable minds could learn how to leverage themselves above others in the future.

It’s really refreshing to see someone who has such a presence on social media and in the sports world not being afraid to use his experiences to voice awareness over a topic that hits close to home for many. He isn’t afraid of showing a softer side of himself to the world. And is being extremely vulnerable in hopes to show more people how to be too.

In the sports world it’s difficult to find athletes who are able to be personal. Let alone advocate for non-sports related issues. Curry gained a lot of social media recognition for his family life. And he has used his platform to voice concern and advocate for a cause that he knows even his non-sports fans will take the time to read and spread awareness for.

I’m thrilled to see him using his platform in a positive way. And that he is making it relatable for fans of all walks of life to read. And I hope and encourage other athletes to speak up and do the same.

“It’s not enough anymore to be learning about it. You have to be doing it.”