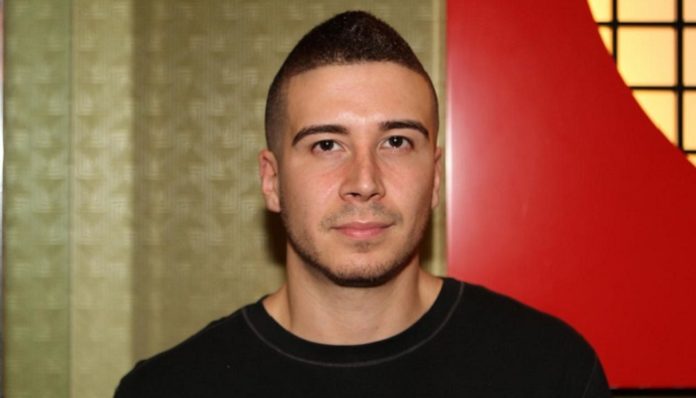 On last week’s episode of Jersey Shore: Family Vacation we were exposed to plenty of drama. And for the first time in weeks it didn’t primarily revolve around Ronnie! (His baby mama drama was getting too much, let’s be real).

Unfortunately everyone’s favourite guido was caught in a scandal where he was seen getting numbers and inappropriately grabbing and touching strippers while out with his male roommates for a night out. Fans kept semi tame during the episode, mainly because Vinny addressed the footage as the episode aired and claimed he was in the wrong.

Finally, a man who can admit his faults!

But then Vinny tweeted a link to an interview his former girlfriend did this morning, claiming him cheating was fake news and that he didn’t cheat, and it opened the floodgates of hate.

Obviously, he genuinely doesn’t see that as cheating. Fans on the other hand stand with his ex, stating that he obviously did. The usually tame keto-guido didn’t take kindly to the accusations (and #facts) from fans and went on a twitter trolling spree while defending his crude actions.

Things began to get a little worse after a few tweets while he addressed that girls need to be verbal when they are uncomfortable, causing some fans to lose their minds over the consent debate.

Then he somewhat acknowledges that he did something wrong by stating he made phone calls to address it, which he truthfully did. But at the same time, he still wasn’t loyal so he technically admitted to doing something bad but still claimed he didn’t. Just because you came clean doesn’t mean you have a clean conscious and it didn’t happen. Way to contradict yourself.

And of course he started insulting “fans” who were speaking their opinion because he didn’t like it.

He went so far as to throw some shade at several men, including his roommate and long time friend Ronnie Margo.

We see what you did there Vincenzo. Didn’t quite say the term “baby mama” butttttt we feel it’s the same thing because they’re still in a committed relationship/family.

And despite all the arguing he still feels the need to try and clear his name and play the victim as he admits his wrongs that weren’t technically wrong in his heart of hearts.

How can he honestly sit there and try to justify his actions, especially when last week he admitted he was in the wrong? Whether it was edited to appear bad, which we all know producers and editors do, it still was made evidently clear that he was doing some inappropriate things.

The physical touching was bad enough, particularly the grabbing and carrying. But the whole exchanging numbers was where it took a turn for the worse.

I love how Jwoww & Snooki are wives and have no problem partying and having fun without cheating on their husbands, Mike was happily in a relationship with his girlfriend (turned fiancee) while being sober and still had fun, yet Ron and Vinny look like they’re in physical pain when they’re in the club and are unable to talk to other girls because of their relationship.

You know, I used to love Vinny because he wasn’t your typical guido and seemed to have respect for women more than Mike, Pauly and Ronnie. But this season has brought out a side of him (or his newfound maturity) that I don’t like. I really hope he can redeem himself this season and stawp acting like Ron. I liked him better when he still seemed level headed and not drunk off Ron-Ron juice and poor decisions.

Featured image via “Vinny Guadagnino” by Mike Lizzi is licensed under CC BY 2.0