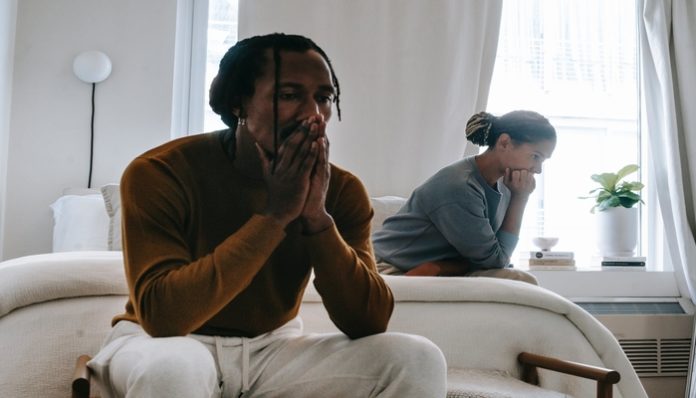 At the beginning of the pandemic, I packed my bags and flew to my parents’ house to wait out what I thought would be a4month of working remote. I had just started a relationship with someone I met on Hinge and felt confident that when I returned, our lives would be normal again – him caring all too much about me, me having a reliable date.

However, I ignored the red flags that popped up in our conversations.

He was too eager to agree with me, too excited about everything I said, and too interested in transitioning from regular dates to a relationship. I found his attraction to me flattering, though, so instead of telling him how I really felt, I went with the flow.

We had gone on a few dates before I flew out to my parents’ house and eventually decided to try to stick it out when I was with my family. Two months in, though, this guy and I were at each other’s throats.

Daily FaceTimes felt more like an obligation than something to look forward to, and I began including my mom on those calls to act as a buffer. We would fight about ridiculous things like hours spent on a golf course and what the capital of France really is.

I ultimately asked him for some space.

A week went by, and I compiled my thoughts. I wrote out exactly how each of his actions made me feel and why I felt the way I did. He responded with a phone call and an apology, and I assumed that our relationship would settle down a bit.

Boy, was I wrong.

The next day, he asked if we could continue the conversation. I said “yes” because what girl doesn’t love hearing a lengthy apology and some ego-boosting flattery? I joined the FaceTime and felt my heartbeat increase as the tone of the call shifted dramatically.

Our “relationship” was over. He hung up in tears, supposedly heartbroken.

Not even a week later, a friend texted me saying that my ex messaged her and said that he wanted to meet her. Meanwhile, I was sitting in my childhood bedroom, completing a paint-by-number with my mom. I was clearly not “getting back out there,” and he clearly was not “heartbroken.”

My apartment lease was up, and I promised a friend that I would go to her wedding, so I packed up my stuff and went back to grown-up land. I re-downloaded Hinge and matched with several suitors whom I planned to meet when I returned. I knew that I was packing up my apartment to return to my parents’ house, so I had no intention of starting anything serious.

After a few dates, I met with my pre-pandemic man for a post-mortem. After all, I wanted to know all of the things I had done well in the relationship and everything I could have done better.

I told him that I was upset that he had pretended to be the heartbroken one but moved on so quickly.

I was honest about how his actions hurt my feelings and how he should have considered me when he gallivanted around.

Honesty and transparency gave us both closure. Wearing your heart on your sleeve can definitely be terrifying, and being vulnerable can make you feel like you “lost” the breakup. But viewing relationships as trophies that you can win or lose diminishes and gamifies a part of life that can have real consequences on our emotions. That’s not fair to our heads or our hearts.

I’m a firm believer that the end of any relationship should come with a discussion and a game plan. How often should each person contact the other? How soon until you each can begin dating again? What happens if you have a physical interaction in the future?

Seeing someone move on faster than you brings up anger, resentment, jealousy, but all of those feelings are normal. Eat a pint of ice cream. Get a revenge body. Embrace how horrible you feel, and do whatever you have to do to move on. As long as you can remember that dating isn’t a game, you’ll never lose.

5 Things You Need To Know Before Starting A New Relationship