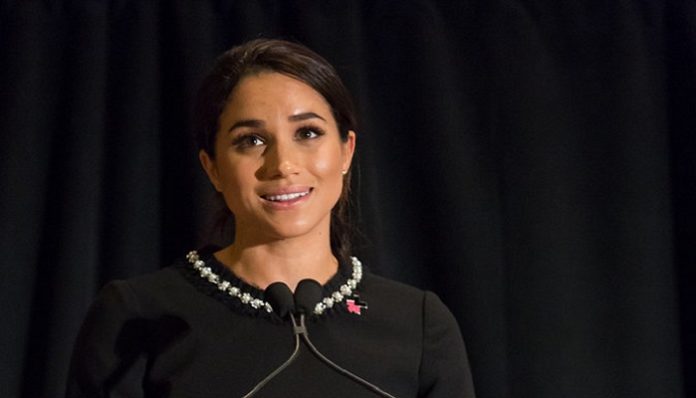 It’s no secret Meghan Markle has broken several British royal family rules during her short time as Prince Harry’s fiancee. Despite what other royal members might say, *cough* Elizabeth *cough*, Meghan continues to live her life to the beat of her own drum without giving a sh*t about what anyone else has to say. Her Princess Diaries dream finally came true and she is going to live it up her own way, by her own rules.

But despite her bravery, she has broken a lot of rules and that have caused a disruption in the family and the media. Here is a short list of the rules Meghan has broken during her time as Prince Harry’s fiancee.

The Don’t Touch Me Rule

The latest rule Meghan broke was when she gave Alice Thompson, a cafe employee, a hug during her recent royal tour of Scotland.

Queen Lizzie might have been unimpressed but Alice was overjoyed at how ‘lovely’ and ‘genuine’ Meghan and Harry were.

“Outside the shop I went to shake her hand and she nudged it out of the way and embraced me with a cuddle,” Thompson told The Daily Mail. “I wouldn’t know about any of the other Royals, but they were much more down to earth than I imagined.”

Just in case you happen to run into my girl Meghan or any other member of the royal family, be sure to follow the right procedures. Meghan and Harry can hug people because she is Meghan the American, and Harry is a rebellious royal, but you, sadly, are a commoner. You must treat the Royals with a little more respect than a ‘cuddle’.

Women are supposed to curtsy to the royal family and men are supposed to bow from the neck down. A simple handshake is also acceptable, but only if a member of the royal family gestures to shake your hand first. Hugging isn’t banned, but it’s usually something you only see Kate Middleton do when she greets children. Since I don’t know how to curtsy and I’m not a child, I’ll just wait for my hug or ‘cuddle’ from Meghan.

The Actually Just Don’t Touch Anyone At All Rule

Speaking of hugging, Meghan (and Harry) have also broken another big rule: No PDA.

In royal family terms, this is like getting caught going to third base with your BF in the back of his pickup truck outside of your parents house. These Royals do not mess around with PDA. It’s a big no-no! That’s why Kate and William stand next to each other like two tin soldiers. Yes, even a simple hand hold is considered preposterous.

The Divorcee’s Can’t Sit With Us Rule

Royals are usually not allowed to marry a person who has been married before. Meghan was previously married to producer Trevor Engleson. Their marriage lasted for two years and they divorced in 2013. Maybe at this point Queen Lizzie doesn’t care who Harry ends up with, she’s probably just happy he isn’t running around Vegas butt naked with random girls.

The Jesus Loves Everyone But We Don’t Rule

In today’s world, the royals are tolerant of all religions but in order to remain in the line of succession, members of the royal family cannot be Catholic. (So are they really tolerant?)

When she was younger, Meghan went to a Catholic school but she does not belong to the Church of England. Again, I think everyone is being a little hesitant to question Harry. His fam should be relieved that Harry didn’t knock up a stripper from Vegas. She could have been the next princess. They should count their blessings they got the Catholic TV star.

The Keep Quiet And Smile Rule

Meghan beautifully graced the cover of Vanity Fair back in September of 2017 and gushed about her romance with Prince Harry. This was a few months before the couple announced their engagement.

In Vanity Fair's October cover story, @MeghanMarkle opens up about living in the spotlight, starring on @Suits_USA, and her whirlwind royal romance: "I think it’s really simple. We're two people who are really happy and in love." Photograph by @therealpeterlindbergh.

It was pretty surfacy shit. She gave us no juicy gossip. Unlike her soon-to-be sister-in-law, Meghan is that girl at the sleepover who gushes about her new boy of the week claiming ‘he is the one’ and the rest of the royal family are her friends who just roll their eyes and (classily) drink another glass of wi(tea)ne.

Way to ignore centuries old traditions like a boss Meghan. We all are cheering you on (and jealously wishing we were you) from the comfort of our Sunday sweats behind our glowing screens.

Keep an eye out for the second part of this article that will dive deep into the royal family rules Meghan Markle should break next as a future princess.