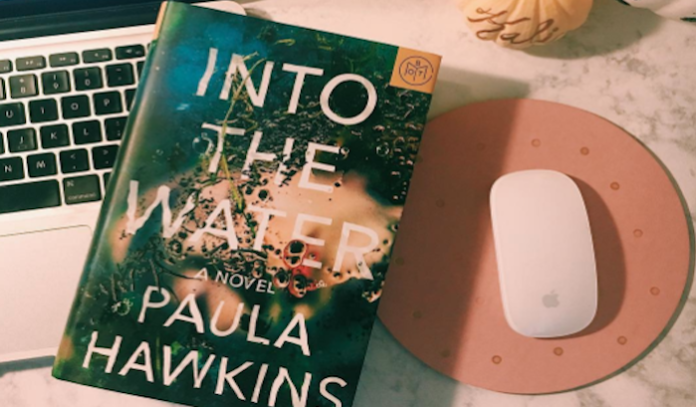 Into the Water was the first book of the book club that I’m part of (Shout out to Boss Babes Book Club – Check us out on Instagram!). We were all super excited for this story because who doesn’t like to have their heart racing as they are uncovering a mystery? After reading Girl On The Train, I was excited to see that Paula Hawkins had put out a new novel and couldn’t wait to see what this new mystery had to offer! I will admit, I couldn’t put it down, but it was out of a lot of confusion more than interest.

If you are a fan of Girl On The Train, you are familiar with Paula Hawkins’ work. Like she had done in the previous book, the chapters are based on the characters different point of views and different time periods throughout the story (LOVE). It is a great way to keep the book flowing and make you see the story through different eyes, while keeping the suspense thriving. The downfall to Into The Water with using this technique – there were far too many characters to keep track of, as well as too many time periods that were being covered.

Along with confusion within following the story lines of the characters, there were a lot of plot holes that were left open. By the end of the story, you have some endings for some of the characters, but there are some that are left open to your interpretation and some that are just misplaced altogether. It’s as if by the end she had too many characters to keep track of that she forgets that one of the characters has no ending at all, he just vanishes into thin air. It just leaves you with this unsatisfied feeling of being rushed to come to a conclusion so the book can just come to an end (not a fan of that).

Even though it was a semi lackluster ending, looking back on the story as a whole, the plot itself is interesting. The idea of the mystery behind this lake that has made several women commit suicide is intriguing, but it is somewhat lost in the jumbled of characters, the mini stories that they tell about their deaths in the lake and the rush of the story line to the end. There are just way too many characters that take away from the main idea of this lake and the mystery that needs to be solved.

Ultimate Ginger Review: I repeat, don’t jump Into The Water with Paula Hawkins (Pun fully intended). The idea behind the book was interesting, but overall it was very difficult to follow. While it was great having the different characters breaking down the chapters, it was very confusing and had way too many perspectives to follow. I would say to give it a try if you were interested in rewriting it or giving it a more full ending, otherwise, leave this one on the bookshelf and pick up a classic murder mystery by Agatha Christie.