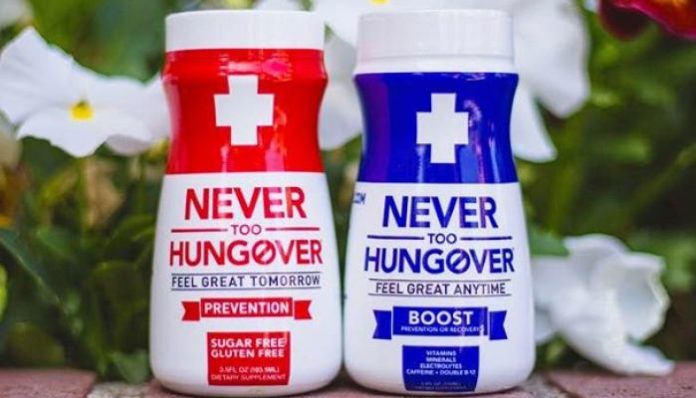 I’d like to start this off by saying, I am not much of a drinker. As a college student, I was too busy with work and school to find the time to drink, and as a graduated adult, I find it hard to hold my liquor and find that everything gives me a hangover these days. No, literally…everything. One beer. Not getting enough sleep. Sleeping on my side wrong. Pretty much everything will give me a hangover.

Which is why I was so darn excited to come across this product called “Never Too Hungover.” At first, I was skeptical, but eventually, I realized that I had nothing to lose and went balls to the wall with it on Saturday night.

Never Too Hungover offers two different formulas: Prevention and Boost. The Prevention formula is intended for use before drinking and during, and it does exactly what its name implies: prevents a hangover. The Boost formula contains caffeine in it and is intended for use during drinking or after. One of the worst parts of drinking is that wall you eventually hit and you just feel too tired to do anything, which is also a big part of the hangovers I get. The Boost is perfect for waking you up a little and making you a little more aware. Essentially, it’s a drink consisting of electrolytes.

I liked this product because I am a lazy drinker. That being said, I’m either drinking casually at a restaurant or bar, or I’m going big or going home and drinking to get drunk (they call this binge drinking). I’m a real ho for shots. But regardless of what I’m drinking or how much, I’m still likely to end the night with my head in the toilet and a killer hangover the next morning. Imagine my excitement when I found out this product existed.

The Saturday night I tried these, I was not about messing around so I decided to quit wasting my time and go right for the shots. I tried the Prevention one first. I’m not so sure if it’s something that is intended for you to take a few swigs of here and there and continue to drink throughout the night or just drink the whole thing in one go, but I did the latter.

The drink itself was an ugly green color and reminded me of a less vibrantly colored Gatorade in both the appearance and the taste of it, but the smell wasn’t terribly pleasant. I sipped the first half of it, but eventually wanted to cut to the chase, so I chugged the rest of it.

The first thing I noticed about this drink is that while taking shots, I never felt ill. I never got sick that night and I never even felt close to feeling sick. This is a big deal because any alcohol upsets my tummy and it results in me throwing up.

I didn’t take the Boost formula that night because I didn’t feel like I needed it. The bottles themselves say not to exceed three bottles in a day, so I decided if I didn’t absolutely need the Boost, then I wasn’t going to drink it. I would say the Prevention bottle did enough though, as I had enough energy to keep me going until almost 2 AM.

Waking up the next morning, I forgot that I had even drank the night before. I had no hangover, I didn’t feel icky, and my mouth didn’t even have that nasty taste to it that it usually does after I drink. In a sense, this product is miracle juice in a bottle. I wouldn’t recommend it to everyone though; if you’re someone who never has any issues drinking and never gets hungover, this product is essentially useless for you. However, if you’re like me and you can’t hold your liquor and must spend the entire next day confined to your bed, this is the product for you. I am now planning on making Never Too Hungover and essential part of every night out, and you should, too.

Featured image via Never Too Hungover.