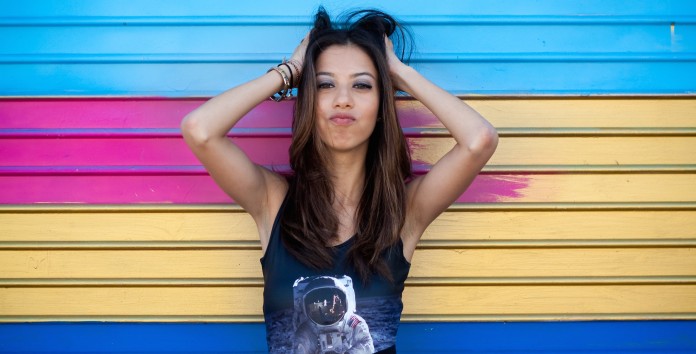 I grew up a good girl. I don’t mean I was just a decent human being. I was suffering from “Good Girl Syndrome,” a disease that looks really good on the outside, and feels really horrible on the inside. Girls, teens, and women who suffer from “Good Girl Syndrome” obsessively and masterfully align their lives to appear perfect.  Unfortunately, when you suffer from this syndrome, you get massive amounts of praise and adoration from those around you. You act “perfectly,” and people applaud you. No wonder it’s a hard thing to quit.

As a child and teen, church and Jesus were my top priorities. I got straight A’s and wore modest clothing. If I was really angry a “darn” might have accidentally passed through my lips, which of course demanded immediate repentance. No lyrics about sex or drugs entered my ears; no movies with sex or drugs entered my eyes. I obeyed my parents’ every desire, I did nothing to cause drama, and I sure as hell didn’t go around kissing boys. No mistakes, no wrong choices.

On the surface, I looked like the ideal child and then teenager. Except it was all an actual mess. I was living a fake life, a life that was all about pleasing everybody else. Once I did succumb to temptation and lost my virginity at the age of 18, all this guilt came flooding in. Sex was for marriage. Up until that moment, I had been living my life as ‘un-sexily’ as possible. No flirting. No cleavage. No looking at naked pictures. Then all of a sudden: sex. Somewhere in the deep recesses of my mind there was no going back. For me, the only option was to fix it. I could not stand the idea that someone could figure out that I really did not have it all together.

This perfectionistic behavior continued into my young adult years. I traded in my Good Girl to become a Good Woman. I constantly allowed myself to morph into somebody I wasn’t. I would do anything to please those around me. Deep inside I was so fearful that my true, messy, real self would shine through and people would reject me.

We always hear about the bad girls and how they need help. They are the ones who need an intervention. But I needed an intervention too. My drug of choice may not have been cocaine, but it was people-pleasing. I desperately needed to be good so people would validate me. My high came from looking like I had it all together.

Here is the good news. For any other teen or woman dealing with “Good Girl Syndrome,” you can escape it.

The “Good Girl Syndrome” isn’t real; it’s a fake representation of who you think you should be. Make the decision to drop the act – because it’s exhausting. You can trade in The Good Girl and become YOU, with all your faults, flaws and fabulousness included.

Why You Need To Walk Away From Anyone Who Gives You...