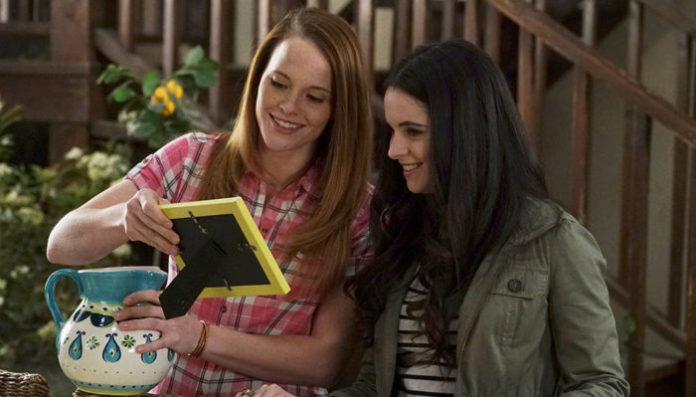 Sometimes when you don’t think anything is on Netflix, you come across an old TV show.

For me, that happened with Switched at Birth, and you could say I’m completely addicted. The show first aired in 2011, and ended in April of this year. The plot sounds a bit cheesy, so I avoided watching the series… until recently. The series centers around two young women, Daphne and Bay, who were switched at birth.

I won’t spill too much, but here’s why you should be watching, or rewatching this series.

1. It Sheds Light On The Deaf Community. After I started watching this show I downloaded an ALS app on my phone. Why? Well, almost half the cast are deaf actors. Actually, one of the main characters, Daphne, is hard of hearing in real life. I think this show shines a light on deaf culture, and it makes people want to learn sign language.

2. It’s Relatable. The drama isn’t crazy and unrealistic. The family deals with things we do every day. You will see family drama, deaths, and even episodes dealing with rape. I’m sure we can all find something in this show we can relate to.

3. It Shows The Difference In Social Class. This show is based on two families. The Kennishes who are very well-off, and the Vasquezes who struggle to get by. In the series, you see there are plenty of class issues. Switched at Birth shows the assumptions well with being brought up in a rich family or a poor family. It allows people to see the positive and negative of the other side of things.

4. Sometimes You Have To Read. You have to pay attention if you are watching Switched at Birth. It can’t just be background noise. This show has subtitles on the screen sometimes when the deaf community is having a conversation. Sometimes, there isn’t any sound on the show just so you can feel the real experience of being deaf and try to relate as much as possible.

5. It Shows That Careers Are Important. I find a lot of family drama TV series are all about romance. That’s not the case here. Throughout the entire series both the girls are very involved with their schools, and career paths. I think this is important for people to see because a lot of series show an excessive amount of partying.

6. It Recognizes College Challenges. The series shows the challenges students can face when they live on a college campus. Including, African American students going on a hunger strike because they aren’t getting treated the same way as white students. Without spilling any spoilers, I can tell you, Switched at Birth sheds a light on important topics we are dealing with in our society.

Although there are many great elements of this show, my favorite part about this show is the deaf community. I have learned so much, and I have even picked up on some sign language from the series. Switched at Birth teaches you it’s okay to be different, how to fight for what you believe in, and the importance of family relationships.

Featured Image via screengrab of Switched at Birth