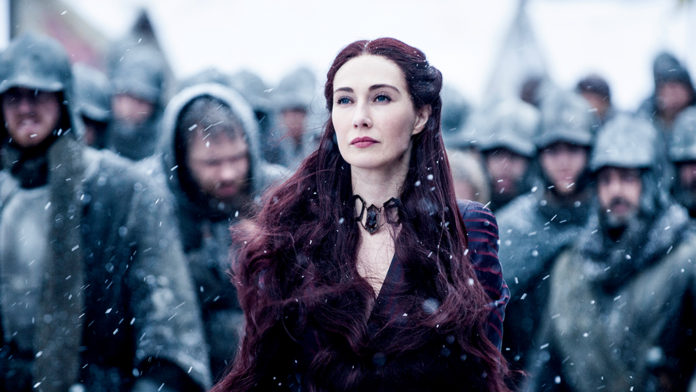 When Game of Thrones started, we met Daenerys who was being sold off and then raped by her new husband. We saw Sansa as a spoiled brat that only wanted to be a queen even if that meant being pushed around by that twisted Joffrey. We met women who were shunned if they didn’t bear sons. We met a man who had sex with his own daughters as they kept silent and living in sheds. Season 6 is changing all of that with these badass ladies!

1. Brienne of Tarth has always been a lady boss when it comes to taking names and kicking ass. Her loyalty is unwavering to boot! She pledged herself to Catelyn Stark in season 2 and has now finally found Sansa. She completely owned that fight against the banner men that were after Sansa. Then got down on her knee to pledge herself to Sansa and we all got chills.

2. The sand snake women have taken over Dorne with their beautiful skin and hair! Not only are these women a family but they are fierce. When their poisonous trick to get back at the Lannister’s is revealed to the prince of Dorne, they immediately kill him, his guards and his son off while claiming “weak men will never rule Dorne again”. 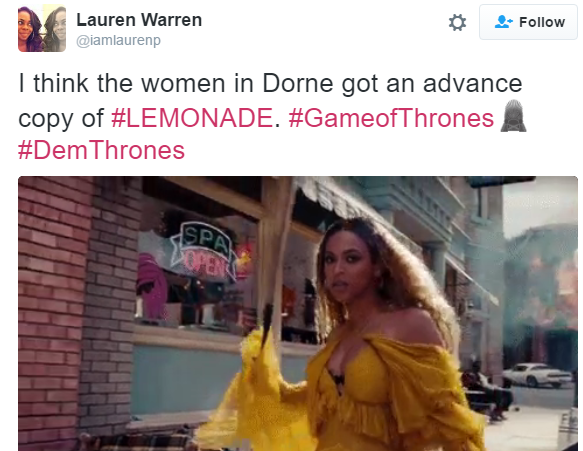 3. Arya is seen blind and begging in Braavos. Another one of the faceless people, a girl, comes across her and begins beating her with a stick as Arya attempts to hit back. Much like at the beginning of her dancing lessons in season 1, she is terrible and gets frustrated. But the faceless girl tells her she will see her tomorrow and we know Arya will be back on her fighting game in no time.

4. The Red Priestess is the only one who can help with this Jon Snow situation. The Men of the Nights Watch still loyal to Jon are at a loss of what to do to avenge their brother’s death. Sir Davos proposes getting Melisandre involved and the men are hesitant, wondering what one red-head can really do. Davos responds with “You haven’t seen her do what I have”. While she gets ready for bed, we see her magic before our eyes as she goes from a young woman to an old lady with just the removal of her necklace; now that’s some powerful bling. 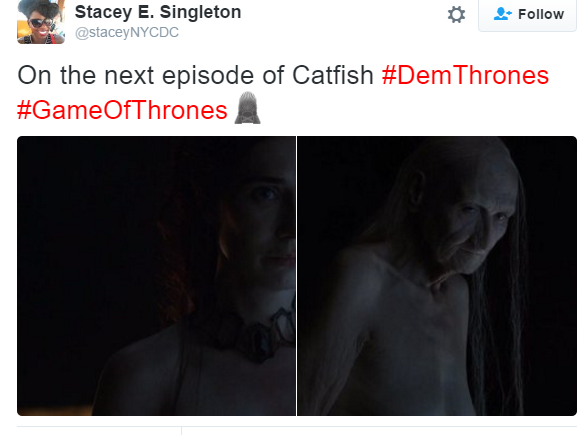 5. Daenerys is usually running about Essos speaking her mind with no regard for the consequence. But in this season premiere, we hear her silence speaks volumes as she waits for the right moment to come clean about who she is to the Khal of this Dothraki hoard. As she is suffering on her own, Jorah and Daario are scouring the countryside for her. Both pining for her love, but, more than that, are waiting “to see what the world is like after she’s done conquering it” because they know, and we know, she would be a baller queen.

6. Cersei sucks. But she is still one of the strongest characters in this show. Who else survives a drunk husband that is in love with a dead woman, a brother/lover being ripped away from her for years as a hostage, her first son dying in front of her, shipping her only daughter away to have her return as a dead body, and a literal walk of shame naked through King’s Landing while people threw poop at her? No one else. And she will keep fighting.

As we know, this is all a game with an iron throne as the prize. If you look back at the royal families, all the kings and potential male heirs have dropped like flies. After the mad king was assassinated, Robert Baratheon was killed by his own drunken foolishness, Joffrey died at his wedding celebration, all bastard kids of Robert were murdered, and Robert’s brothers were killed as well. Clearly men are not too great at staying in charge; it’s time for the women to take over the red keep.