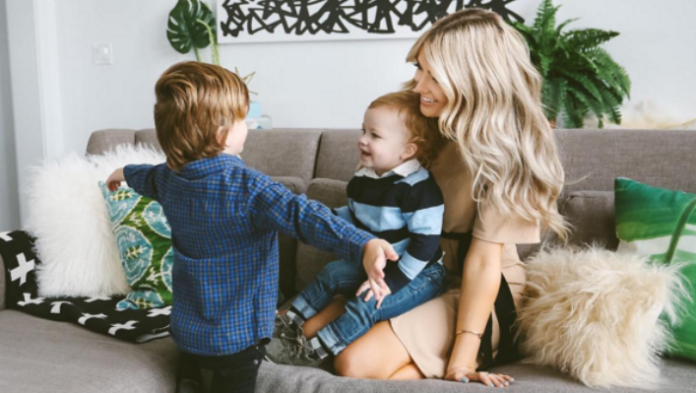 The idea of being a working mom is pretty intimidating. But in a recent Twitter discussion, popular feminist and women’s rights activist, Emma Watson, was asked if women could have a career and family. She instantly responded “Why not?” Honestly, I think she’s right. Strides have been made towards the working mom being a cultural norm and it’s evident in the way we are moving away from an attitude of shaming the women who choose this path.

You may not even realize it but we’re surrounded by strong, successful women pulling off double duty, here’s a few that inspire me everyday:

Queen B herself is a classic example of a powerful woman who is killing it in both her career and her family life. She had her daughter Blue Ivy in 2012 and has seamlessly managed to be a mother, a wife, a singer, actress, and total badass.

“Life is completely different now. I feel really, really just lucky that I can still do what I love, and now have a way bigger meaning.  And that’s to be her mother.” – Beyonce Knowles

Michelle is not only first lady, she is a leader and partner in several global initiatives. She prioritizes education, supports equal pay laws, advocates for military families, promotes the arts, started the “Let’s Move” initiative to battle obesity in the US, and joined the campaign to bring back kidnapped Nigerian school girls. The graduate of Princeton and Harvard has 2 daughters; Malia and Natasha. She is also vocal about supporting other women balancing work and family.

“You see, at the end of the day, my most important title is still ‘mom-in-chief.’ My daughters are still the heart of my heart and the center of my world.” –Michelle Obama

Drew was a child-star and became one of Hollywood’s resident party-girls for many years but things have changed. She’s a great actress, producer, a UN Ambassador Against Hunger, a CoverGirl model, the face of one of Gucci’s jewelry lines, and a writer (her newest book being, Wildflower.) She began filming Blended 8 months after her first child’s birth and was 3 months pregnant with her second when the film wrapped. She has remained dedicated to both her career and her kids.

“I wish I were that all-home-grown-food perfect woman, but I’m not. I’m the mom with the kitchen on fire and food on our faces.” – Drew Barrymore

Sandra Bullock is one of the most successful actresses in the game. She also happens to be rocking it as a single mom. She adopted her son, Louis in 2010 followed last month by a daughter, Laila. She works hard as a single mom and continues to thrive in her career, even being named People’s “World’s Most Beautiful Woman of 2015.”

“I don’t know how that balance will work out later on, to be honest. All I can do now is enjoy exactly where I am, and things will happen as they’re supposed to.”- Sandra Bullock (People)

We all know and love her as Posh Spice but she has achieved a lot since her Spice Girls days. Victoria is a businesswoman making her mark on the fashion industry. Victoria works with Free the Children, is part of the Elton John AIDS Foundation, promotes faux fur, and joined the Ban Bossy Campaign, advocating for leadership roles for girls. Married and raising 4 children; Brooklyn, Romeo, Cruz, and Harper in her family home, “Beckingham Palace,” Victoria is certainly a role model for other women who want to have it all.

“I really enjoy being a mum, I love my kids more than anything, but I love doing what I do as well and it’s just getting the balance right which is not easy, at all.” – Victoria Beckham

Jennifer is no doubt a wonderful actress but also a great mother to her 3 children; Violet, Seraphina, and Samuel. She wrapped The Odd Life of Timothy Green when she was 3 months pregnant and has always returned to work within 9 months of giving birth. She has worked hard to protect children by campaigning for laws to make paparazzi photographing children illegal. Jennifer has tried to keep life as normal as possible for her children during their parents’ divorce while balancing her work life and we commend her for it.

Anna is the end all be all of fashion itself. She has been the editor in chief of Vogue since 1988. She knows the fashion industry inside out and is known for being a very hands-on editor of fashion’s greatest publication. She had two children with him before assuming her position with Vogue. She worked to build her career while caring for her family. She’s faced criticism for her promotion of fur in fashion and the depiction of her in The Devil Wears Prada, but none of it has stopped her from reaching success.

“I think it’s very important for children to understand that women work and that it’s fulfilling and it doesn’t mean they love you any less or care about you any less.” -Anna Wintour

These women hold positions of power, wealth, and fame while raising families. It’s inspiring to know how successful someone can be in all areas of their life. However, many of us don’t have to look any further than our own lives. We have been raised by mothers working outside the home and we have friends and family who are splitting their focus between career and family. Women can do anything they want and the future is filled with possibilities as we move towards a culture more accepting of women who wish to achieve both their career and family goals.