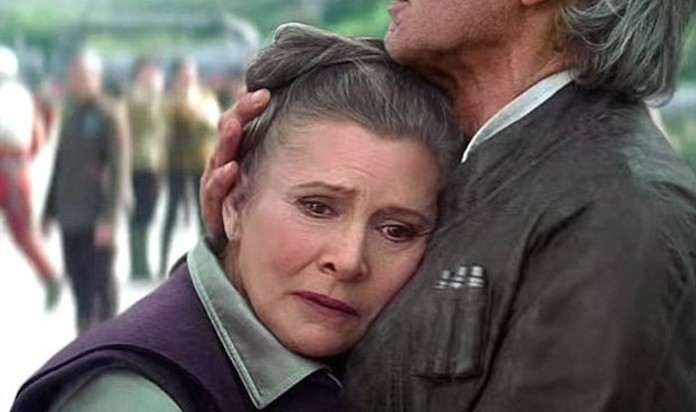 Carrie Fisher, who is famous for her portrayal of Princess Leia, has taken a stand against social media trolls who have criticized her appearance in Star Wars: The Force Awakens. She posted on Twitter to tell social media trolls that they have an inability to focus on more meaningful aspects of her return to the role of Leia Organa who is now a general rather than a princess.

Her character is empowering for women and breaks down barriers about age and gender in the media especially with Hollywood. Carrie Fisher (and her character Leia) is 59 years old. She turned to Twitter and posted:

She furthered elaborated that “Youth and beauty are not accomplishments, they’re the temporary happy by-products of time and/or DNA. Don’t hold your breath for either.”

She told Daisy Ridley, the actress who plays Rey in the new Star Wars film, that “you should fight for your outfit, don’t be a slave like I was,” which is in reference to the gold bikini that Fisher was asked to wear in Return of the Jedi. She has discussed how the gold bikini outfit was uncomfortable and she felt vulnerable. She has mentioned that the gold bikini was too revealing, especially around her lower body.

Ms. Fisher discussed how she felt pressured to lose weight for the new Star Wars film. Some of the movie producers told her she needs to lose 35 pounds. Harrison Ford and Mark Hamill have faced fewer comments about their appearance in JJ Abrams’ critically acclaimed film. The public seemed overly preoccupied with Fisher’s aging process, while Hamill and Ford got an easier ride (typical). She ended her monologue by saying that “Men don’t age better than women, they’re just allowed to age.” Some Twitter users told her as a public figure, she should be prepared for negative comments in the social media sphere. This is true, but she deserves respect and she should not be attacked or trolled.

Besides acting, Carrie Fisher has had a successful career as a writer and comic. She’s also an activist for women and standing up against fat-shaming. The Twitter critics should be focusing on more important aspects of Leia Organa’s return to the hit movie franchise rather than caring so much about looks. This is an example of how sexism and ageism are still prevalent in society and we need to change the narrative. Society needs to stop focusing on looks and appearance and should care about the person as a whole.

Featured Image via screengrab of Star Wars: The Force Awakens.

5 Steps To Starting A New Chapter In Your Life