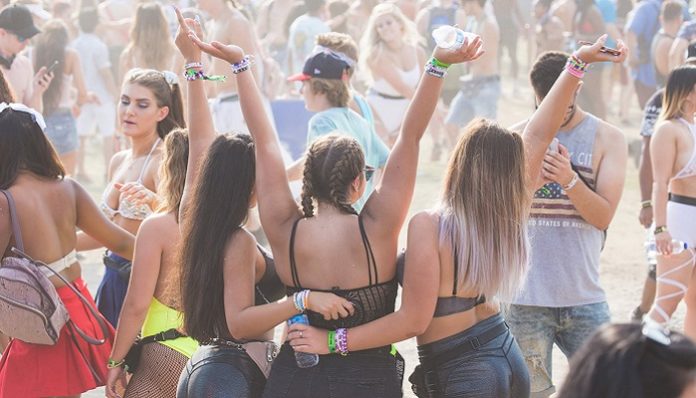 For decades, music festivals have allowed American youth to experience live music and feel connected to one another – alongside ample drugs and alcohol, of course. They’re a time traditionally saved for close friends to experience together, strengthening bonds to the sound of sweet classic rock, or even creating raging dance parties in EDM mosh-pits. The collective excitement truly is one of a kind.

A few weekends ago, I did something taboo…I attended Austin’s two-weekend festival, Austin City Limits, very much alone. Among a sea of teenagers drinking vodka out of water bottles, trendy young women with matching flash tats, and rows of weekend warriors passing around whatever drugs they could find, I stood by myself – feeling pretty old and well, lame.

But despite all of that, there were lot of beautiful benefits to my solo concert experience, and as the weekend ended, I was pretty grateful for it all. Ever wonder what will happen if you wander onto the concert scene solo? Here are a few things to look out for:

Concert friends are always a nice surprise. You are both brought there under a united purpose, so it’s pretty easy to find common ground with these strangers. When you’re alone at a show, it becomes that much more important to put yourself out there and talk with your neighbors.

And people are pretty into it! This weekend, I made a friend during Brand New’s set when we both complained about pushy tall people at concerts without any self-awareness or concern for others in the crowd.

I feel like festivals are partly designed strategically to bring people together through music – given all that I’ve learned about Woodstock back in the day. Why not use one for its intended purpose and make some new connections!

Not everyone jumped at the chance to be my friend. In fact, many of the younger festival goers seemed downright uncomfortable to see me dancing around alone! I almost felt embarrassed at first during Cherub’s concert, tempted to mumble something about meeting my friends later – before realizing that

I didn’t need to justify being there.

I understand the fear: I can’t imagine attending anything alone in high school, let alone an event as big as a music festival. Social expectations aside, I think I would have just been afraid something would happen.

College and big girl life has forced me into countless exercises in solitude: grocery shopping, getting coffee, commuting to work, running outside – you name it! If nothing else, seeing how strange some people felt about my lack of friends showed me how much I’ve grown. I love being alone! Some of my most cherished moments recently have come when my roommates are all out, and I have the house to myself. Learning to be comfortable with yourself is a huge part of growing up, and it feels good to exercise that.

Here was my major mistake: bringing a giant backpack. Unable to rely on the thoughtfulness of my friends, I packed sunscreen, extra clothes, hidden snacks, extra water, blankets to sit on and even a book in case one show was really a snooze. Yet, the moment the baseline of “Doses and Mimosas” began, and my backpack thumped against my back with every dance move, I knew I messed up big time.

I assumed I wouldn’t be dancing since I had no friends, but I think that made me stand out more! Really, who stands with their arms folded during a concert!?

If I had to do it again, I’d ditch the backpack for something small, and dance my little heart out. There is no stronger way of owning your aloneness than really letting loose. And once I did (albeit with my huge backpack hitting the people behind me), I made some friends who were also flying solo.

Music festivals are unique in that they bring together dozens of different acts, vendors, food options and people. When there’s no band you want to see, there is always something to explore or fancy lunch option to try.

Personally, eating alone makes my meals go way faster, and during a free hour, I downed my fish tacos in 15 minutes. Instead of talking with a friend or sitting around like I may have done, I walked to the closest stage and listened to a new band.

The group I discovered was BLESSED, an all-female gospel group from Houston that really knew how to sing. I definitely would have avoided gospel music normally, but when I had nowhere else to be, they took me by surprise!

Obviously alcohol comes in steady supply at festivals, especially in Texas, as fans can still somehow bake away in the heat when it’s October! Yet, for me, much of the appeal of throwing a few back disappears when I’m doing it alone. Not to mention, it’s just dangerous!

While I’ll admit to nursing the same beer through a few shows (after realizing I don’t know what to do with my hands while dancing without a drink), I didn’t drink once. Losing this sense of collective community and fun that friends bring to a music festival was really surprising, and probably the part of the weekend, that I was least prepared for.

Though attending Austin City Limits alone had its ups and downs, I would recommend the experience! Doing anything social alone can really teach you about yourself and show common social acts in a new light. For myself, I walked away from the weekend knowing how much fun can be found in small moments with strangers and how music sounds way different and more personal without anyone around to distract me.