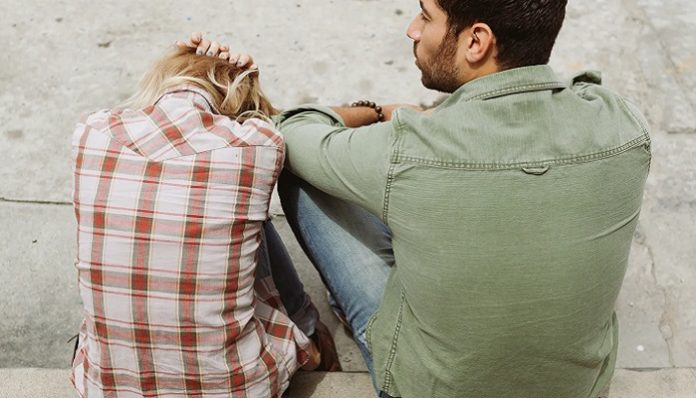 Having had my share of abusive relationships, I was inspired to become a Certified Life Coach and Personal Safety Trainer & Self-Defense Instructor to teach others about the signs that a relationship is veering into unhealthy territory.

Stick with me here, and you’ll learn about why emotional abuse (or any other kind of abuse) occurs.

Emotional abuse is kept quiet in most relationships, so you need to know how to identify it quickly before your self-esteem (and your self-confidence) is damaged.

Low self-esteem will affect all of your relationships with family, friends, coworkers, and partners in the future, so it’s very important to protect it.

Emotional abuse can happen in any relationship in your life, not just a romantic partnership.

Let me share a very simple reason why all forms of abuse happen. When someone attacks you verbally, mentally, emotionally or physically, it means they are feeling out-of-control in their own life and have a need to control someone or something else to feel powerful again.

They may not even know they are feeling that way or being abusive.

We’ve all shoved our little brother when we were little or made fun of someone behind their back, right?

This is attacking. It’s really not mysterious behavior, it’s simply a trap we fall into when we’re feeling insecure. And that insecurity doesn’t have to have anything to do with the person we’re abusing.

The rush of power that abuse delivers is short-lived (like a rush from a drug) so the behavior is usually repeated until the abuser feels more self-confident.

That new-found confidence can be real or imagined and maybe five minutes away or five years away, which is why some people are abusive their whole lives.

Self-esteem is an inside job. No one can grow it for you; you must do it yourself and some people never learn how.

Instead, they choose to blame everything and everyone else for their misfortune. Keep in mind though, that the only people who get abused by others are the ones who allow it.

This doesn’t mean you’re at fault if you get abused, but it does mean it’s your responsibility to get out once you identify what’s happening.

If you stay, you’re simply allowing yourself to be mistreated and enabling the attacker by sticking with them.

When there are no consequences for someone treating you badly, they often continue and your self-esteem goes down the tubes.

In this state, you may even start abusing someone else!

Unless we focus on personal development and adjust the underlying cause for our insecurities, we can fall into the same abusive trap.

It’s a vicious cycle that we can stop, but it takes guts to take responsibility for changing your life. All it takes is a simple shift in perspective.

If you’ve been in more than one emotionally abusive relationship (like me), I want you to take the time to build up your self-esteem before the next relationship so it can be a healthy one.

When we’ve had one abusive relationship — unless we do some soul-searching and get our head and heart straightened out, we’re very likely to attract another one.

One of the reasons for this is that we subconsciously blame ourselves and think it’s what we deserve.

I know that sounds ridiculous but remember this is all subconscious. You can consciously be thinking and saying you deserve better, but feelings are deeper than thoughts and words.

After someone tells us we’re not good enough or that no one will ever love us, our subconscious begins to believe it.

You want to harness the power of your feelings to succeed in love rather than getting more of the same abusive partners.

The difference between mental & emotional abuse:

Mental is thought, emotional is feelings. The difference may seem subtle, but the implications are huge.

Thoughts are conscious and emotions (feelings) are subconscious and rule our lives even though we may not even realize it. In other words, emotional abuse causes you to feel bad about yourself.

When someone is emotionally abusive, it’s unlikely they will change unless:

This is often called the honeymoon stage of domestic violence and is continued manipulation.

As you know, when we fake anything, it’s only a matter of time until we can’t keep up the act and go back to who we really are.

This is why there is a cycle of domestic abuse, which goes:

The emotional abuse may or may not include:

Some examples are making jokes at your expense and blaming you for things that aren’t your fault (like their bad behavior).

Remember that mental, verbal and physical abuse can also be emotionally abusive if they cause you to feel bad about yourself.

Intimidation, threats like “No one will ever love you,” or “If I can’t have you, I’ll make sure no one will,” can scare us into submission.

This is one reason it is vital to identify emotional abuse right away and exit the relationship to protect ourselves.

7 Undeniable Signs That You Have A True Best Friend

This Is How One Author Changed My Life Entirely