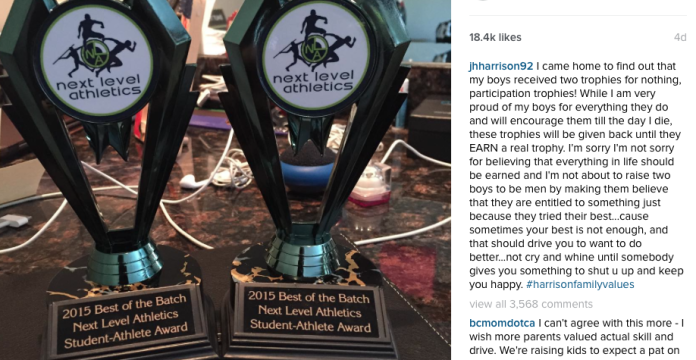 There is no such thing as a moral victory in James Harrison’s mind.

The Pittsburg Steelers’s linebacker posted a photo on Instagram of his sons’ two “2015 Best of the Batch Next Level Athletics Student-Athlete Award” with probably the best caption of all time.

Harrison wrote that while he was still proud of his sons (because that’s what dads do), he feels participation trophies are irrelevant and stupid.

Okay, maybe not that blunt, but he did say that, “These trophies will be given back until they EARN a real trophy. I’m sorry I’m not sorry for believing that everything in life should be earned and I’m not about to raise two boys to be men by making them believe that they are entitled to something just because they tried their best…cause sometimes your best is not enough, and that should drive you to want to do better…not cry and whine until somebody gives you something to shut you up and keep you happy. #harrisonfamilyvalues”

And Harrison with the tackle on human entitlement!

With this parenting, brought thousands of comments as to whether or not participation trophies should actually be a thing. And here’s my highly sought after and super sassy opinion on it.

Participation trophies are utterly ridiculous. I worked at the glorious YMCA in the Youth Sports division, reffing and patrolling hundreds of kids every Saturday morning for 6 years as they ran around playing in the dirt, standing on the field picking their nose or every once in a blue moon, actually attempting to play the sport. While it was totally cute and I don’t regret any aspect of “reffing” these kids for as long as I did, having to haul the damn participation trophies in my car after every season was my least favorite and probably most annoying part of my job.

You see, because these kids didn’t do anything. Honest to God, they did nothing. And they get a trophy for that? Are you kidding me? I get it, it’s cute taking the picture of your kid with the stupid trophy for you to show them when they’re actually old enough to recognize what’s going on in the world, but it’s teaching your kid the most ABSURD values and work ethic ever.

I can’t remember the last time my parents kept a participation trophy of mine. I was taught to earn things in life. While my parents were at every game growing up, cheering just as loud as the rest of the parents and drove me to every practice, they didn’t teach me that life is about being rewarded. They taught me that if I wanted something, I was going to have to put in the work for it. By telling your kid that he gets a trophy no matter if he picks his nose or plays on the field is telling them,“No matter what you do, you’ll still get rewarded for it! YAY!”

Seeing firsthand how these kids lackadaisically walk up to me and shove out their hand for their trophy like I was giving out water or fresh air should be a nice little bright-red sign for everyone out there that these kids are not being parented; they are being pacified.  They are being taught that they don’t have to put in work or actually break a sweat to get rewarded in life.

It’s about time that someone with some notoriety stood up against this bullsh*t notion that kids should get rewarded for “participating”. Life is about losing. IT’S ABOUT FAILURE. It’s about how you handle these situations that shapes you as a person. People are always talking about how no one has any work ethic anymore, and why would they? They get rewarded anyway, so who do we really blame here? It’s time we stop with the damn participation trophies, ribbons and certificates and start teaching kids what life is really about, and that’s busting your ass, putting forth an effort, and ACTUALLY participating.