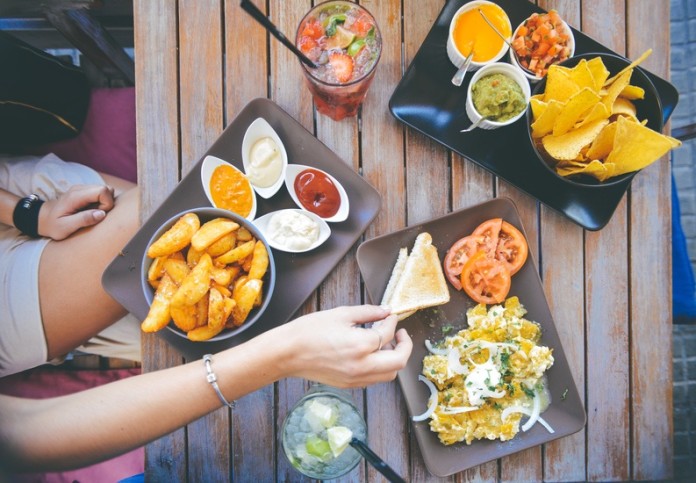 Finding the time to make healthy meals in college is hard. Tired of eating salad and then pizza while all the while trying to convince yourself that it was a healthy meal? I know the feeling. When you’re running from class to class, studying and then going to the group meeting at the library, it seems like you may not even have a second to breathe. For the days where you’re running around like a mad woman, here are some tasty yet healthy, quick fixes for on the go.

Serves two. I love this because it’s like having a little calzone except you can brag and say you made it yourself. This would be a great party snack, or something to eat while you study if you’re in a time crunch.

Mince the garlic and add it to a skillet with the olive oil. Cook over medium-low heat for 1-2 minutes, or until it starts to soften. Add the frozen spinach and turn the heat up to medium. Cook for about 5 minutes, or until heated through and most of the moisture has evaporated. Then, add a little bit of salt and pepper.

Serves four. You know that guy you really like and finally got the guts to ask on a date? Invite him over to your place for dinner and impress him with this super yummy dish. It’s not as messy as long spaghetti noodles so you won’t get sauce all over your face.

Cook the pasta as you usually would and drain it.

While waiting for the pasta to cook you can dice the onion and mince the garlic. Cook both in a large skillet with olive oil over medium-low heat until softened and transparent (takes about 5 minutes).

Put in the fresh spinach and gently stir it into the sauce until it’s wilted (about 3-5 minutes). Add the pasta and stir until it is well coated in the creamy tomato sauce. You can adjust the salt and pepper to your preference! Serve warm.

Serves 10. Healthy, filling and delicious?! What more could you ask for! These quesadillas are perfect for those late nights when you’re craving some Mexican food but can’t afford to buy anything (we all know the feeling). These would also be the perfect snack for a girls night just staying in and watching movies!

After draining the beans, rinse lightly and place the beans in a large bowl along with the corn (you don’t need to thaw it).

Rinse the cilantro, take off the leaves, and chop roughly. Dice the onion and mince the garlic. Add the cilantro, onion, garlic, and shredded cheese to the bowl with the bean/corn mixture. Finally, just mix up some taco seasoning, add to the bowl and stir everything until it’s all blended together.

Place a half cup of the mixture on one side of each tortilla and fold over. Cook in a skillet on both sides on medium heat until golden and crispy when the cheesy filling has melted.

There you have it! Healthy doesn’t have to mean tasteless and bland. Trying to live a healthier lifestyle shouldn’t have to mean juice cleanses and diets; eating better is great for your body to make look good and feel good too!

Why You Need To Think About Your Words Before You Say...