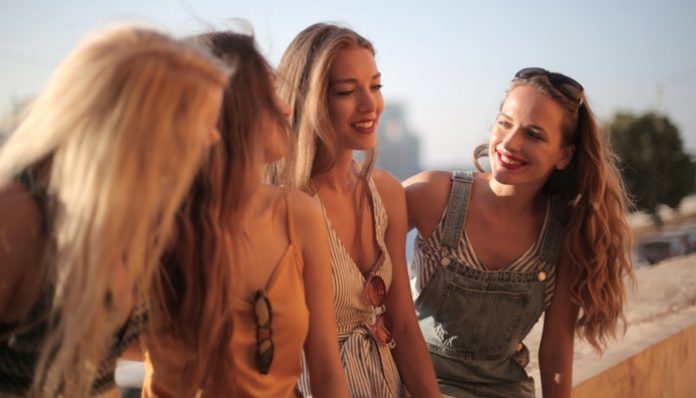 If they appear to be joking, there may be a level of seriousness motivating this kind of self-deprecating question.

They’re probably asking for your supportive feedback in a safe, self-protected way, in case you respond unkindly.

Even the strongest people may ask, “Am I ugly?”

Everyone gets their self-confidence knocked off-balance at some point, even the strongest people. And everyone has an inner-critic voice that makes them say surprisingly mean things to themselves.

Some people appear very confident and are good at hiding their self-doubting feelings. But even the most confident people have to spend energy talking back to their inner self-defeating tendencies.

And even a very confident-seeming person may take a risk to ask you — either in a half-joking, self-protective way or in an openly vulnerable way — for your supportive feedback.

This is your moment to show up as supportive and empathetic.

Remember that this may be the person who you ask to help when you are having your own very hard self-critical moment.

So, now is your opportunity to not only show up as their understanding support person, but also to set yourself up to have a good support person when you need one later.

Cracking a joke at this moment could be really hurtful, even if you think it’s funny.

That’s because you’d be emotionally out of sync with your distressed friend when they are asking you for help.

And cracking a joke when someone is vulnerable and taking the risk to reach out and ask for support feels insensitive and ridiculing to the person who is in pain and reaching out to you.

It may be a hurtful lesson to them that it’s not safe to ask you about sensitive things.

Being asked, “Am I ugly?” is an opportunity to deepen your relationship.

In her book Not Just Friends, Shirley Glass describes how to make a relationship feel more intimate emotionally by “opening windows” for a trusted person into your more personal and private feelings.

When a person asks you “Am I ugly?” they are offering to open a window for you into the self-doubt they’re feeling at that moment. It’s an honor to get this invitation.

And it’s an opportunity to demonstrate yourself to be a trustworthy and supportive person who is interested in hearing their more personal feelings.

Do you want to be a close, trusted friend to the person asking you this question?

Attachment research tells us that in healthy, securely-attached romantic relationships, each person is emotionally accessible, responsive, and empathetic to the other.

Being asked this question too often may indicate a problem that needs attention.

It may be an indication that the person asking you is suffering from self-doubt or self-critical feelings too much, and may need more help on those issues.

In this situation, the most supportive option may be to ask your friend if a therapist might be useful to help them learn how to get out of the self-critical trap they sometimes get pulled into.

When someone has really been taken to the mat by self-criticism, they need a direct answer and not just another question in response.

Adding a statement of reassurance to that meaning including your opinion, or saying that the opposite of their self-critical question is more true, will help the person asking you that question to see you as a clear supporter.

To direct the conversation in a more productive and supportive direction, you can add a question about what prompted them to ask such a self-critical question.

The best kind of answer to “Am I ugly?” is a direct answer to the question plus a bit of reassurance.

Unhelpful answers are avoidant ones such as:

Helpful answers are direct ones with a reassurance statement attached, such as:

Inquire about the deeper question that motivated the self-critical one.

After you’ve given a reassuring direct answer, you have an opportunity to deepen the conversation by asking them what they’re really worried about.

Did something happen to trigger their self-doubt?

Unhelpful answers that are additionally critical, include:

Helpful answers that are curious and caring, include:

When a person is suffering from rough self-criticism, they may be asking themselves unfair questions.

For instance, they may be exaggerating the importance of looks over other qualities. Or they may be focusing on one negative aspect of their appearance and thinking of it as characterizing their whole value as a person.

Often, when self-criticism gets really overwhelming, a person’s general feeling of being worthwhile, likable, and valuable unfairly shrinks down to one single measure.

Add a comment reminding them not to shrink down their self-evaluation to one thing.

After giving a direct answer with reassurance, helpful additional answers are:

What if there’s something you want to delicately give negative feedback about?

The person asking you this question may be wanting support or feedback about an off-putting way of presenting themselves or an ongoing appearance issue they’ve felt self-critical about or have had hurtful feedback about before.

This can be a very sensitive topic to discuss.

If you already know this is an issue and you want to be a trusted person they can talk about it with, you can address it in a caring, supportive manner.

Unhelpful answers are critical and make the person asking feel even worse, such as:

Helpful answers are curious and caring, such as:

Being asked “Am I ugly?” may feel like a question trap into a no-win situation, but it’s not.

You can definitely respond to this question in a way that presents you as a caring, supportive person and a good listener.