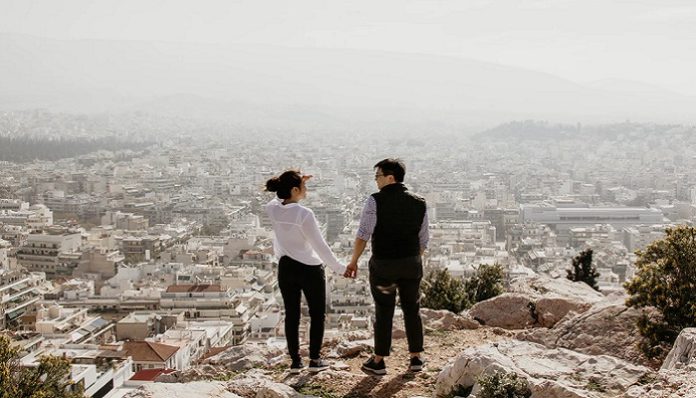 I sat on the ferry, looking out to the overcast sky, praying for some sunbeams to peak through the clouds. I kept myself occupied playing with the puppy that conveniently sat next to me while I tried to overcome my anxiety that had unexpectedly hit me.

I looked out the window one last time and caught a glimpse of a small lighthouse that sat on the shore. The sky had finally started to clear up as the boat began to dock. I gathered my L.L Bean duffle bag full of outfits I probably wouldn’t wear half of and swung my tote bag over my right shoulder. Taking one last look in the mirror, I wiped the dark makeup that had smudged beneath my eye.

I was about to embark on a Nantucket weekend with a guy I had only been on 2 dates with.

Ok, what if I get sick of him? What if he gets sick of me? Am I supposed to greet him with a hug, kiss, or neither? I can’t hug him, my hands are full. Did I pack enough? Why the f*ck did I think bringing muffins was a good idea? It’s f*cking weird. I don’t see him. Did he forget? Should I call him? Text him? God, I’m screwed.

The walk down the ramp lasted about 45 seconds, but it felt like a lifetime. It was like I was an awkward pre-teen at a middle school dance again, having no idea how interact with the opposite sex.

“Hey! It’s good to see you!” he exclaimed. My overpacked bags made the struggle fairly visible as I approached him with a nervous smile on my face. Play it cool.

“I brought you muffins!” I screeched. Jesus Christ, Beth. Do less.

I hopped into his truck after loading my stuff in the back seat and an iced coffee sat in the cup holder waiting for me. Medium iced coffee with a shot of coconut and skim. He remembered my coffee order. Here I was visiting a guy who lived on a gorgeous island year-round, and he remembered my freaking coffee order from 2 weeks ago. Was this real life?

…And on that note, the weekend with Nantucket boy began.

We kicked off the weekend with lunch downtown followed by a sunset on Madaket Beach. The sun exploded with colors, fading from oranges to pinks reflecting on the still water in front of it. When I wasn’t trying to capture the perfect Insta pic, I would glance over at him in the driver’s seat and thought to myself so far, so good.

The rest of the weekend consisted of checking out the lighthouses, driving down the narrow roads by multi-million dollar homes, and people watching the poster children of Lily Pulitzer. I could go through a laundry list of the things we did, like going to the super nerdy yet awesome Whaling Museum, eating a orgasmic waffle bowls from The Juice Bar, or pretending to scoff at the “unimpressive” yachts on the docks at the boat basin. But, I won’t.

At the start of the weekend, I found myself looking for reasons not to like this guy. I questioned his motives at points when there was really nothing to question. I wanted to believe that he was just like everyone else, and was basically planning the plot of my next blog post (evil, right?). Girl likes guy. Guy seems to like girl. Guy seems to be too good to be true. Girl questions everything guy does. Guy hurts girl. Girl was right all along. The end.

It was because he enjoyed my company.

Saturday we sat on the beach at Brant Point Light and watched the boats drive by despite the cloudy sky and cool wind. He looked at me as we sat there in silence and said (soberly, I must add), “I’m really happy you’re here.” I looked at him and smiled for a brief moment before letting my eyes wander back out to the sea. “I am too,” I replied. He likes me.

I forced myself to stop questioning and overthinking and started seeing things for what they were. I ditched the all-too-familiar “who can show less interest while still interested” game and started embracing the idea of just enjoying someone’s company. Why is that so hard?

In past relationships, I put myself out there, try as hard as I can be to be honest with myself, and slowly start to understand what I look for in a guy, but oftentimes it’s too late. I allow myself to become blind to the disappointments and and red flags because I think that I will miraculously become the girl they’ve always wanted. I tell myself that I’ll be the exception, because I think that I deserve to be the exception. But, don’t we all?

I didn’t go Nantucket searching for the love of my life. I didn’t go looking for a boyfriend or a man to fill some empty void. I went because I like to take chances, I like to put myself out there despite the disappointments that I can never seem to escape from. I went because I’m a freaking hopeless romantic. Sue me.

We all have sh*tty track records with past lovers (ok – most of us do). We all want to feel like we are wanted for the right reasons, when that hardly seems to be the case. Telling yourself that you’re “giving up on men” doesn’t give you the power, it gives it right back to the guy who made you say that in the first place. So, that’s why I choose not to give up.

This guy made my sh*tty track record feel not so sh*tty. I’ve tried to avoid the adjectives “amazing” and “perfect” to describe this weekend because it sounds obnoxious when I say it loud. But, it kind of was. Sorry, not sorry.

As much as we *gag* at fairy tale romance, we all secretly sort of want it. The problem often arises when we always expect some sort of resolution to come out of everything; a “happily ever after,” if you will.

We sat on the dock a couple of hours on Monday before I had to board my ferry ride home. My fairy tale weekend was quickly coming to and end, despite our attempts to make it last as long as possible. I want to tell you that we had an elaborate conversation about what was next with us, what we “labeled” ourselves as, whether or not we were “exclusive” because I know that’s what you’re expecting. That’s how these stories are supposed to end, right?

Well, simply put my “fairy tale ending” consisted of eating muffins on the dock and talking about sailboats. That was the ending to the closest thing to a “fairy tale” I’ve ever experienced. And to be honest, that was the best ending that I could have asked for.

I was unsure of when I would see him again, but I realized that I didn’t need a resolution or any sort of “ending” to the weekend as I boarded my ferry ride home. I left with the peace of mind that he liked me, and I liked him too. And oddly, that was enough. A label doesn’t always lead to certainty because I’ve found a label is what we seek when we’ve reached a state of uncertainty.

So, what’s next with this guy? Wouldn’t you like to know, because I don’t really have a clue either…and I wouldn’t want it any other way.

I don’t want a “happily ever after,” because I’m not even certain of my own “ever after” yet.

I don’t think our story is over yet and I can’t tell you what is going to come next, but I am certainly enjoying writing it so far…literally and figuratively.

Photos provided by the author