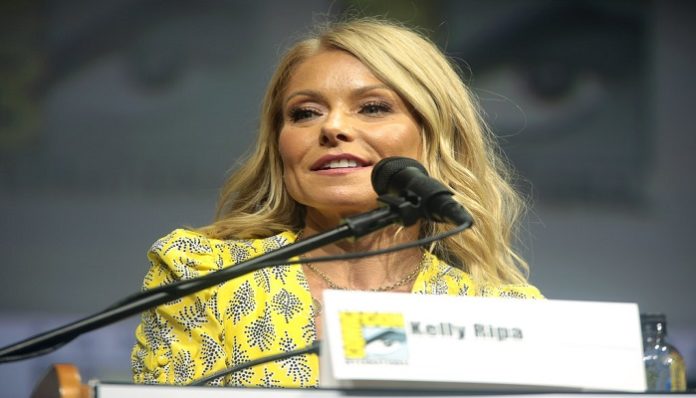 I feel like it’s kind of odd in a way to be given an award for treating people like people.

Actress, talk show host and television producer Kelly Ripa gave the most heart warming speech as she accepted the Excellence in Media Award at the 26th annual GLAAD Media Awards ceremony in New York. The U.S. Supreme Court is currently considering whether to legalize gay marriage in all 50 states in the upcoming month.

The topic weighed heavily on many of the Hollywood LGBT figures during the media awards – as proven by Kelly Ripa’s public outcry to encourage us to actually start treating people like people regardless of their sexual orientation.

“The LGBT community has led the way in treating people like people. Oftentimes, those who are the most discriminated against are the most empathetic and the most inclusive. Quite frankly, I should really give this award to everyone in this room but that would make my son very unhappy” she laughs during her speech. Ironically, she didn’t feel like an award is appropriate to celebrate those who take a stand towards equality. Who could blame her? At the end of the day, we’re all humans. We all have human rights. Equality has become a growing concern in the recent decades because people are simply afraid of hiding their identity behind a mask due to fear  of judgement and rejection. And as Kelly Ripa profoundly expressed – this has got to end. Our battle of equality is not a one-man job – it requires a change of mind not only by those who have the privilege to speak their minds on national TV, but it requires us to treat each other as equals.

This year’s ceremony was dedicated to honor those who are part of GLAAD’s mission of ensuring that stories of lesbian, gay, bisexual, and transgender people are exposed through media outlets accurately. Oh, and did I mention they raised $225,500 in the process?

“A few years ago my youngest son asked me if it was legal to be married to Mark because all of my friends, who getting married at that time were same sex couples. It dawned on him that a heterosexual couple getting married might actually be illegal.” shares Kelly about her personal life and her kid’s confusion. While her quote made me laugh at first, I realized that this problem confuses everyone.

Before hosting Saturday’s ceremony, Ross Matthews stated “We are on the precipice of the Supreme Court giving marriage equality across the land, and I want to remind people that love is love.”

“There are so many things that I would like to see changed. We still need more diversity and trans visibility on television and especially in film,”  said Orange Is the New Black star Laverne Cox. “I’m proud of the changes and progress we’ve made” she continues. Hot topics such as equality have definitely provided more interesting conversations than the usual ‘what are you wearing?’ on the red carpet.

“And most importantly, along with the Supreme Court legalizing gay marriage, we need public policy that support the lives of trans people that don’t criminalize us for walking down the street or using the bathrooms. More policies need to be created for our protection and ones that protect our LGBTQ youth. I believe we can all join together to create change and save lives. Now is the time do it.” says Laverne Cox proudly. Don’t you just love people who are not afraid to speak their minds?

We all know kindness doesn’t cost a damn thing. So sprinkle that sh*t everywhere.

The Best Friendship That I Have Comes From My Relationship