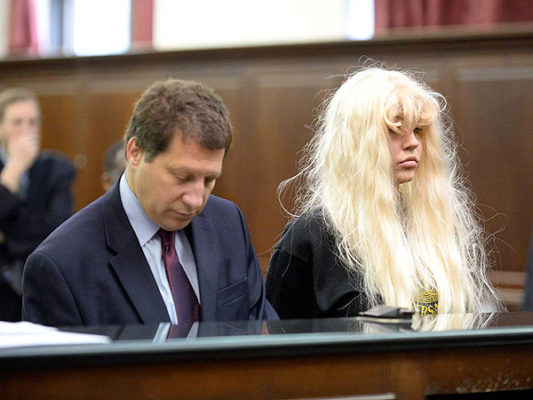 On November 10, Amanda Bynes tweeted out to her nearly 3.6 million followers, “It’s against my religion to follow an ugly person” followed by “That’s why I feel pretty.” The tweets combined received over 75,000 retweets and 60 thousand favorites. News stations everywhere reported that Amanda Bynes was back to her unhealthy routine, professing that even her parents gave up on her. She has been publicly in and out of rehab treatments in an attempt to become well again, but the media won’t leave her alone –and neither will we, if we are being honest with ourselves.

As Amanda’s actions show, she has a mental illness and cannot help that she is lashing out in some bizarre ways. In Hollywood, there are plenty of stars who struggle everyday. Britney Spears, Robin Williams, Selena Gomez, we could count celebs until we are blue in the face. While it seems that the number of stars with mental illness dwarfs the regular individual with similar disorders, that perception could not be more incorrect.

There are 42.5 million people across the country diagnosed with some sort of mental illness each year, that’s roughly 1 out of every 5 persons. We only have the notion that celebrities more likely to be afflicted by mental illnesses because we have this idea that only celebrities would “need rehab.” Unfortunately, this belief is only kept alive by the lack of understanding of these disorders. For those of us who aren’t famous, no one is publicizing that you sought help – celebrities don’t have the same luxury.

We laughed out loud when Britney Spears shaved her head back in 2007 and we are laughing out loud watching Amanda Bynes struggle to keep her head afloat. Britney Spears in particular was plagued by a mental disorder and was going through a particularly rough time when she broke down. The pictures of her shaving her head are still used to crack a joke to this day, seven years later. We can do better than making a joke of these disorders and I strongly believe that getting a handle on what mental illness is can truly change that. The only way to change the precognitive connotation is to understand what they really are and how individuals with these illnesses can be treated.

What people don’t take into consideration is that these celebrities are dealing with serious illnesses, ones that we can’t see because they are being eaten alive on the inside. Who even knew that both Ellen DeGeneres and Kirsten Dunst suffered from depression? I bet you more than anything that at least one of your classmates is struggling right now and you have no idea.

Most people have heard of depression, bipolar disorder, general anxiety, but there are more than the aforementioned illnesses. The sheer numbers of individuals affected by mental illness are absolutely staggering. For example, six million adult Americans have some sort of panic disorder, over two million people suffer from OCD, and 15 million suffer from a social phobia. These statistics tell us that there are more people who are afflicted than we have ever imagined – and our jokes are hurting that many more people.  We need to realize and pay attention to what we are saying. Cracking a joke about your friend having OCD isn’t funny when they really have it and you only said it because you didn’t know. People don’t tolerate using the word retarded or calling things gay, so we shouldn’t tolerate jokes about mental illnesses, either. Simply because of the sheer complexity of these disorders, those who are suffering from them may lash out in frustration as they can’t figure out why they are feeling certain ways –and who are we to poke fun at them when they are more lost and confused than ever?

I’m not trying to say we all need to go to school and become psychologists to understand the thousands of mental illnesses that exist in the world today, but I am saying that we need to at least try to understand that they exist. It’s hard for people to cope sometimes with the burdens they are carrying and a helpful hand would be greatly appreciated, not a meme on Twitter.

Why You Should Not Have To Justify Your Dating Habits