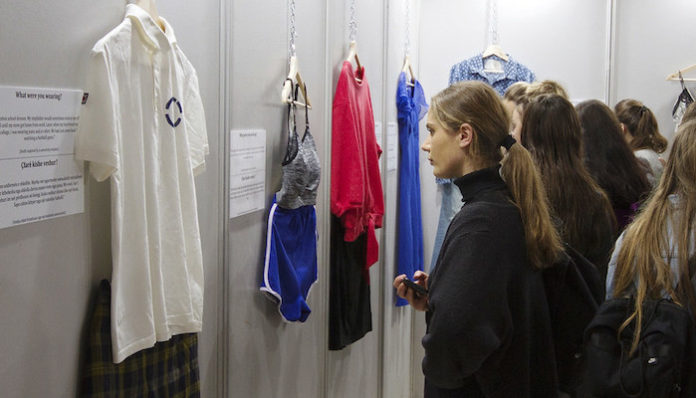 Rise currently has an exhibit open at the United Nation Headquarters in New York City. The exhibit, “What Were You Wearing?” features the clothing survivors wore when they were assaulted.

Many times when a sexual assault survivor comes forward, others ask them what they wore at the time of their assault. This question victim-blames, re-traumatizes many survivors, and oftentimes makes survivors doubt whether they should come forward about their assault. A survivor’s clothing at the time of their attack is never an excuse for the violence and trauma that they endured. There is only one person at fault in each situation: the perpetrator. No one should ask survivors what they were wearing when their perpetrators attacked, and the type of outfit a survivor wore should never be used as evidence against them.“What Were You Wearing?” started off with five outfits but expanded to103 outfits survivors wore at the time of their assaults, all of which mannequins display. The exhibit represents each of the 1.3 billion sexual assault survivors around the world.

The outfits are diverse.The mannequins have outfits from survivors of all different ages, genders, cultures, and backgrounds, and every survivor’s story is different.

The survivors’ identities are anonymous out of respect and to help protect them from the stigma that surrounds rape.

As a survivor who speaks about her assault, I am proud to know that my outfit is on display at this exhibit. As I look at my outfit on display, so many thoughts run through my mind. It takes me back to those days when my assaults happened, but more importantly, it reminds me of how strong I am and how far I came.

The strength each survivor shows in sharing their outfit is so moving. It’s beautifully heartbreaking to see so many survivors coming together to help create impactful change. I’m so thankful to be where I am today — helping advocate alongside other survivors.

Caitlin Ryan, a member of Rise who worked to organize the exhibit, shared that working on the exhibit is sobering, especially considering the diversity of each survivor’s outfit. She stated that this exhibit provides a clear image that sexual violence can happen to anyone, anywhere in the world.

By boldly showcasing survivors’ outfits, the Rise team believes that it can help shift attitudes about what sexual assault looks like.

The future for the ”What Were You Wearing” mannequins is clear — they will travel to many locations worldwide this year and the next.. Rise wants to display this exhibit at places of power and prominence where those in power have traditionally excluded women and other marginalized groups have traditionally been excluded. This traveling exhibit will draw much-needed attention to sexual assault and impact many.