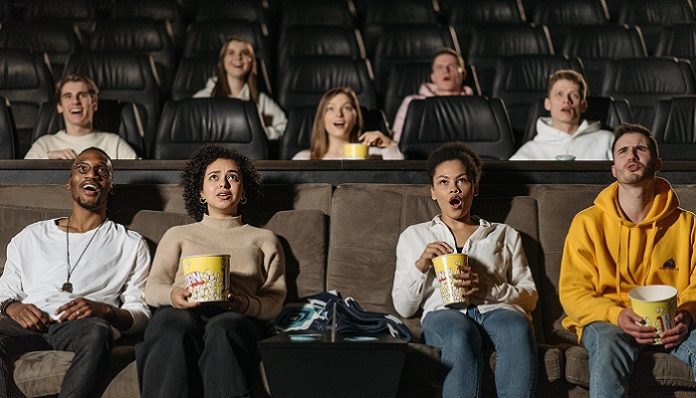 Halloween may fall on October 31, but we all know that Halloween is an entire season filled with falling leaves, spooky decors, and pumpkin-spiced everything. I mean, can any other season beat that? I don’t think so. So, get your spooky dresses out, buy loads of candies, and get your collection of horror movies out of the messy old attic in time for a binge-watch session.

What’s that? You don’t have a messy attic? You have no idea what to watch, and you have guests coming over?

Well, we have you covered. If you’re looking for some exciting and spooky recommendations, we have just what you need. In this guide, we’ll list down the five best horror movies and TV shows to watch this Halloween.

Brace yourself: Our recommendations will send shivers down your spine! If you’re too afraid to watch them yourself, then you better call up your friends and plan a super fun sleepover!

The first recommendation we have is a classic. The Witches is a two-decades-old movie set in England. It follows the story of little Luke, who overhears a bunch of children-hating witches planning to turn all of them into mice.

When the witches find out that Luke has found out about their plans, they decide to test the formula and turn him into a mouse.

This adaptation of Road Dahl’s book, The Witches, is a must-watch, at least every Halloween.

If you think movies like The Witches are too childish and not scary enough for you, then this horror-drama TV show is just what you need to binge on.

The paranormal activities of the Hill House haunt five siblings from their childhoods until adulthood, and the flashbacks of the 1992 events take them back to the day when the family fled from the house.

Scary, spooky, and binge-worthy — these words describe this Netflix TV show perfectly, making it a perfect choice for Halloween.

Also, if you end up completing the show in a single day, you can move to The Haunting of Bly Manor — the second installment of this Netflix series.

This recommendation is for all anime fans out there. With an IMDB rating of 8.3/10, Castlevania is a horror anime series that you wouldn’t want to miss out on.

The TV series is set in 1455 and follows Lisa, who partners with Dracula to study vampires. The anime then immediately cuts to some years later and shows Lisa being burnt by leaders of the Church.

After that, Dracula sets out to take revenge for his long-lost love, resulting in four seasons’ worth of bloody and beautiful family drama.

All horror movies aside, nothing beats the shivers that Child’s Play causes. A murderer, almost reaching his end, pours his soul into a doll using black magic. A woman ends up buying the doll for her son, and that’s where the murders begin.

After the murder of his babysitter, the child realizes that the doll is alive, and the family now has to convince the detective of the truth before the doll, Chucky, murders other people.

The last recommendation is the adaptation of your favorite childhood storybook: Hansel and Gretel.

The story is set fifteen years later, where both Hansel and Gretel have turned into bounty hunters who destroy every witch that lurks in their way.

But, as soon as the blood moon approaches, the brother and sister have something different to face, something more evil that links to their past.

These are some of the best horror movies and shows you can watch this Halloween. In case you’re still home-bound due to the pandemic, you can always ask your siblings to have a spooky movie night with you.

So, get the candies ready, order some takeout, and have the best Halloween night with the content we just recommended.

20 Flirty Texts To Send Your Partner To Reignite The Romance