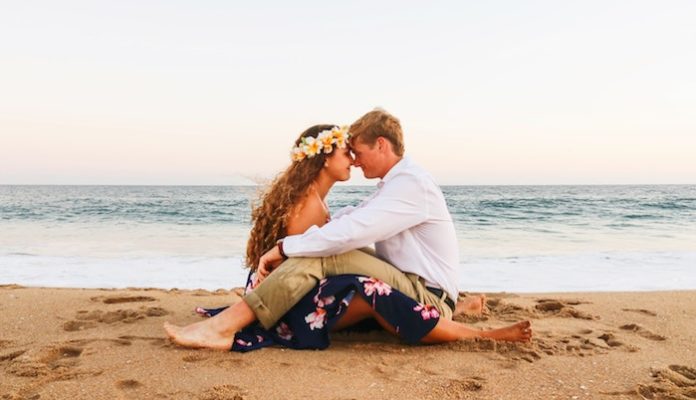 We always hear that there is a certain part in every relationship that either person realizes that they are in love with their significant other but, we don’t really get to know the exact details of when it actually happens. For women, I’m sure it’s easier to imagine when that moment can arrive.

When it comes to the male species and how they never show any emotion whatsoever unless they’re losing a game of their favorite video game then we’re in the realm of lost. We cannot even imagine how or when they exactly realize that the person they are with is the person they want to be with for the rest of their lives?

Do they see a halo on them and angels start to sing? or maybe they imagine gusts of wind blowing at their partner and music starts to play in the background? Well, I guess we don’t have to wonder any longer.

When I realized I hadn’t been eating at all because I never wanted to miss a chance to get food together because I was already full–I would drive 30 minutes across the city, pick up Tim Hortons and bring it to her place so we could spend 20 minutes together eating after she got off work at 11 p.m. (and had to go to school at 7 a.m.) We’ll be together 6 years this June.

When she kicked my ass playing Mortal Kombat. Sad thing is, she is not really a “gamer” either.

We’d been dating for a while and I came home to my apartment after leaving hers, but for some reason that time, it didn’t feel like home. Looking back I guess I just wanted her there too. Also, there came a point when I wanted to make her laugh and smile more than I wanted to see her boobs.

Very early in our relationship, we were goofing around in the kitchen and I put some ice down her shirt. After the initial jolt and small scream, she grabbed the sink hose and blasted me. It was mischievous, it was fun, and it was adorable. My brain completely shut off all filters and I blurted out, “I love you.” No regrets. That was six years ago. We are now happily married.

As lame as it sounds, the moment I saw her, the day I met her, it was the first time I really felt alive. Don’t get me wrong, we are complete opposites and she drives me crazy–but my life was made complete the day she walked down those stairs.

It was actually kind of easy. After living together for 2 years I basically realized that I wasn’t tired of her and was still excited to come home and see her each night.

Wifed it.  Two kids later, a home, cars, and everything else–we still cuddle each night and sleep together a few times per week.

After I got a rejection from a job interview that I swore I had in the bag, all I wanted to do was sulk in my house alone. She knew me and knew that I need alone time when I’m angry. She ended up ding-dong-ditching me, leaving a card, candy, and beer. Asked her to marry me less than a year later.

We were on a date and there was a lull in conversation while I was driving. I started singing “Puttin’ on the Ritz.” under my breath and she joined in in the style of the Monster in Young Frankenstein. I almost proposed right there.

She was just hanging out on the sofa painting her nails, I was playing Paper Mario 64 and realized she was my best friend, that I trusted her, and I couldn’t imagine myself with anybody else. Told her then and there. No reason to keep it to myself.

When I realized that whenever I was thinking of my future, she was always there with me. It wasn’t “my.” future anymore but “our.” future and I was actually very excited about it.

So, my grandpa died and I was emotional about it. I went to see her just to take my mind off things and we ended up doing karaoke at a bar for some reason. We sang “Undone.” together and I mimed doing the guitar solo and I realized that I felt so free around her, just a lack of self-consciousness, and I knew.

We met and had hung out a few times. Driving an hour and a half while following her to her mom’s house, I shit myself. Literally. She came in the store with me and went and picked me up a new pair of jeans and a pack of boxers, laughing the whole time. I knew when she didn’t run away at that point that she was the one.

Probably when she embarrassed my dad by telling him her bra size. Seriously, there wasn’t an exact moment, but the realization grew when I recognized that I was just as happy with her in dead silence, as I was when we were laughing and goofing around.

I went on a bucket list guys trip. Something we had been talking about doing for literally 20 years. My best friends realizing a dream we had all had for decades. And the whole time I was there I couldn’t stop thinking how much I wished she was there and couldn’t wait to get home to tell her about it.